The War on Ordinary People 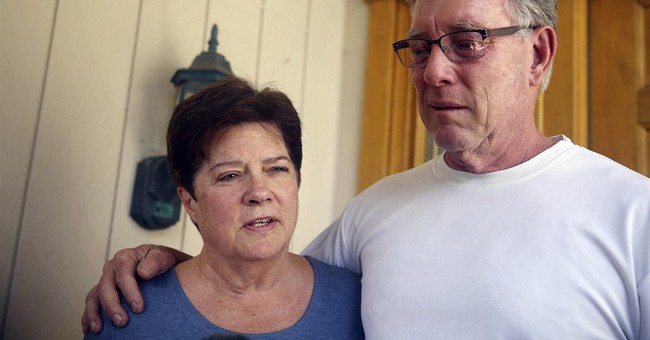 Do you often feel like you've been kicked in the gut when you get the day's news?

I do and this last week followed several brutal weeks with fresh, new kicks in the gut: There was that nuclear deal with Iran that scares the living daylights out of most of us but is likely viewed as Nobel-worthy in Foggy Bottom, and of course the Little Sisters of the Poor -- nuns who attend to the indigent elderly, providing homes and other services for them at the end of their lives -- were ordered by a federal court to violate their consciences or face ruinous fines.

The nuns sought an exemption from the Department of Health and Human Services’ notorious contraception mandate, which would force the sisters to pay for health insurance policies that cover contraception and abortion producing medications and procedures that are forbidden by the Catholic Church. No dice, says the Obama administration.

If news that your government is harassing nuns wasn't enough to ruin your dinner, there was the gut-wrenching Fox News interview with Liz Sullivan and Jim Steinle, parents of Kate Steinle, who was murdered in the sanctuary city of San Francisco, allegedly by an illegal immigrant felon and frequent deportee who returned again and again (and again and again).

Fox's Bill O'Reilly asked Jim Steinle if the outpouring of sympathy from all over the world had made a difference for the family, and when Mr. Steinle said "Oh, yes," the warmth and genuineness in his voice broke your heart. In his grief, Jim Steinle didn't forget to be appreciative of others.

I am ambivalent about Fox's refrain that President Obama should have called the Steinle family. A president can't contact all the suffering families in the nation. Still, the choices are telling. Half the administration shows up in Ferguson because of Michael Brown's death, but Kate Steinle's parents aren't on their radar. Homeland Security Secretary Jeh Johnson was asked at a congressional hearing if he knew whether anyone had placed a call to the Steinles. "To who?" he responded.

These three developments in just this week confirm that the concerns of ordinary citizens are not of interest to our government. In the case of the Little Sisters of the Poor, we saw something worse than mere dismissiveness -- here government was going after ordinary citizens who want to live and serve the poor according to their religious principles, something Americans once took for granted as our birthright.

Aaron and Melissa Klein, who have been in the news in recent weeks, were also ordinary citizens: small town bakers in Oregon, owners of a shop, and creators of pretty confections. They are facing a $135,000 fine because, citing religious scruples, they refused to bake a cake for a gay wedding. Whatever your opinion on same-sex marriage, can you agree that citizens should not be forced by the government to violate their consciences? "It's horrible to see your own government doing this to you," Melissa has observed.

President Obama has just released and commuted the sentences of forty-six felons (with President Obama there is always a celebrity angle -- one of those released was Denver Broncos star Demaryius Thomas' mother, who was serving twenty-four years for drug trafficking). Some of these nice people weren't exactly the oppressed of the earth, as the left often views violent offenders. But, hey, if they re-offend, it likely won't be in a gated community. So the political class just isn’t too worried about it.

Ordinary Americans -- those who work hard and don't end up needing a commutation of their prison sentences -- don't like the way things are going and deserve better. They may feel helpless right now, but they have something Republican presidential candidates need if they are to get a chance to undo some of the depredations of the Obama administration: votes.

Some sat it out for Mitt Romney, and they could sit it out again. That is why, when Jeb Bush recently said he'd been to see Mitt Romney and intended to heed Romney's advice to reach out to people who don't vote Republican, my heart sank. I think Romney was speaking not of these ordinary people, but of hardcore Democratic constituencies.

Reach out. By all means. It is the right thing to do, the America thing to do. If a Republican is elected, let's hope he or she will bring us together again, all races and all classes, including people who don't vote Republican. But here's a bulletin to all Republican candidates: if you have realistic hopes of being president, you have to reach out to the ordinary people, many of whom are members of your party and who have come to regard our government as indifferent or hostile to people like them.

They worry that Iran will go nuclear even quicker than Korea, that their kids won't get a basic education, and that jobs will dry up. Jobs, not assistance programs, are what they want because they still see the value of work. They believe America should welcome everybody who wants to come here legally, but they don't want to lose their jobs to illegals.

Ordinary Americans feel powerless to affect anything. They're told that, if they like their doctor, they can keep their doctor, and when this turns out not to be true, it's almost a joke. The Iran deal is unsettling but, even so, Congress probably can't stop it and even if by some miracle it musters the votes to do so, the U.N. already will have lifted sanctions. It won't matter. What we think won't matter. We feel trapped and helpless. Our country feels like someplace else.

Who is speaking to these ordinary people?

The Donald Trump phenomenon is likely the result of the perception that Trump, even when over-the-top and ridiculous, at least is trying to talk without timidity to the real concerns of many Americans.

Oddly enough, the other candidate besides Trump who is making the most direct pitch to the ordinary citizen may be Hillary Clinton. Yes, you heard me. America "needs a raise," Clinton says. Her policies will do just the opposite, but she knows that ordinary people are tired of a lousy economy and have votes to give or withhold.

If Republicans can't do better than to talk general terms about "prosperity," an abstraction -- and becoming more abstract every day -- they don't stand a chance. I'm not Peggy Noonan and I can't write the speeches. But I do know this: Republicans must recognize that ordinary people are angry and want a better deal, at the very least a government that is not against them.

This could be a decisive factor in a close election.

For once I’d like to turn on the television and hear a candidate who understands how I feel -- that the country seems on the brink of permanently falling apart -- and who wants to do something about it. Ordinary people like me may not fit neatly into any demographic set, but we are out here and we matter.