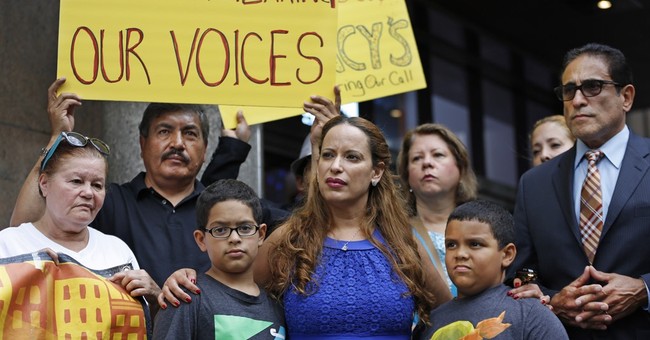 A republic such as the one born 239 years ago tomorrow requires a populace capable of citizenship.

Unfortunately, a Sacramento city school district is doing everything it can to prevent children of immigrants from acquiring the skills of citizenship. The Sacramento City Unified School District's Board of Trustees has unanimously agreed to establish an ethnic studies pilot program because, as Drudge put it in a headline that is almost an oxymoron, eighty percent of the students in the school are minorities.

A news report says that the pilot program will be set up "in collaboration with community organizations, local university professors and college students." This is being done because "minority students feel culturally disconnected from the standard curriculum in high school, particularly in literature and history classes."

Of course they feel culturally disconnected: a "significant portion" are "English learners," which is a sly way of saying that they don't speak English. But that is not a reason to foist these vulnerable young people off upon a rogues gallery of professors and other liberal interest groups, who will make it more likely that they will remain “English learners” and practically ensure that they never meet Jane Austen or Nathaniel Hawthorn and learn the facts about their adopted country’s historic development.

That is a travesty. I once had the privilege of reading essays for an English as a Second Language (ESOL) essay contest. Essayists, all recent immigrants, all hard at work mastering English in a program staffed by volunteers, were asked to write about a Founder who had special significance for them. The essay I recall most vividly was by a young man from Africa. The English was halting but the essay nevertheless managed eloquence: James Madison was the essayist's particular hero because Madison stood against the kind of tyranny the young man had known. This was a recent immigrant on the path to citizenship and assimilation. Thank goodness he hadn't gotten sidelined by in a woefully politically-correct Sacramento public school!

Admittedly the Sacramento public school system faces a demanding situation--according to the news report, forty-four recognized languages are spoken by the student body. Logically, that would provide a rationale for assimilation, unifying the student body by placing a premium on English skills rather than furthering cultural fragmentation. But logic is not the strong point of contemporary education.

“Students begin to see themselves in the curriculum,” said Jonathan Tran, an organizer (of course) with a group called Hmong Innovating Politics and a past school board candidate and who is worked on the ethnic studies campaign, said. “They become more invested in the subject they're studying.” But the subject isn’t supposed to be themselves; that is solipsism, not education.

Education ideally takes us beyond ourselves. Sacramento's ethnic studies program sounds very like the destructive educational theory that kids from poor urban areas should read specially-written school books about life in the ghetto rather than being introduced to a different world, through the novels and plays that used to be part of the usual high school curricula. Whose life is not enriched by knowing history and literature? Is a poor kid less able to thrill to Odysseus' adventures than a rich one?

This doesn't require a rejection of one's roots, and there is no reason why Hmong culture cannot be preserved in a family whose children nevertheless read Shakespeare and study the Founding Fathers. But I suspect that Mr. Tran's motive is not strictly cultural. His website says that the mission of Hmong Innovating Politics (HIP--get it?) is "to strengthen the political power of Hmong and disenfranchised communities through innovative civic engagement and strategic grassroots mobilization." Hmmm.

Forgive me if I think this sounds more like a political boondoggle than a program of cultural and ethnic enrichment that will make life easier and more prosperous for kids of immigrants. And may I further inquire as to what specific communities are "disenfranchised" in Sacramento?

Communities whose kids aren't required to become proficient in English stand a pretty good chance of becoming, if not quite disenfranchised, certainly disadvantaged. Sacramento's ethnic program will be introduced in 2016, pending a determination that it is in accord with Common Core. If it does pass muster, it will be monitored by the district's High School Graduation Task Force, which will "be responsible for making sure ethnic studies courses satisfy graduation requirements, and incorporating ethnic-studies elements in classes across the board."

It may sound quaint now, but in the past immigrants struggled to master English and gain the attributes that enabled them to contribute to their new nation. And I know there still are immigrants out there trying to do just that—and it ought to be our most fervent duty to support their efforts and facilitate the next generation’s assimilation into our culture and economy.

In fact, if I had a Fourth of July wish this year--and it is a year when I am worried about the future of the republic--it would be that a worthy citizenry will wake up before it is too late and remember to appreciate what it is that made our country great. Programs such as the one in Sacramento convince me that the prospect for this is iffy at best.