College Experiment: You’re Not Doomed Without A Degree 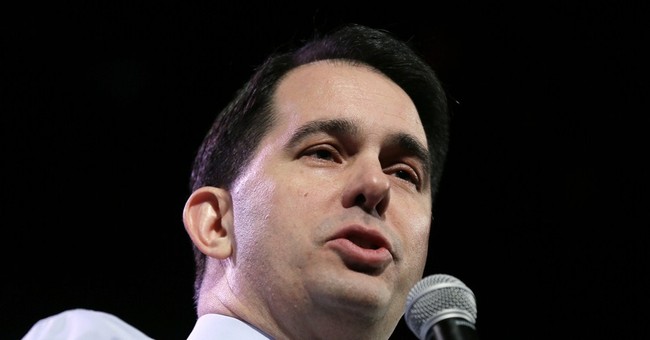 The Washington Post, the newspaper that brought us an in-depth investigation into the prep school high jinks of W. Mitt Romney, has delivered even more shocking news about the educational career of Scott Walker, twice-elected governor of Wisconsin and increasingly plausible GOP presidential hopeful: Seems Walker doesn’t have a college degree.

While many Beltway Washington Post readers no doubt reached for the smelling salts, stunned that even Republicans would stoop so low, my gut reaction was quite different: Wow! I knew I liked that guy. I bet a lot of Americans thought exactly the same thing.

After eight years of misrule by a highly-credentialed product of Columbia University and Harvard Law, isn’t it just possible that the country might be ready for a street smart Marquette University drop out?

Though the Post is at pains to paint Walker’s leaving Marquette in his senior year to take a job as a “failure,” many people wouldn’t see it that way. It looks like the “failure” may have been nothing more than the result of a lack of money, not exactly a moral failing. Walker is the son of a small-town Baptist minister, hardly a get rich profession.

Upstanding, successful working people whose values are not shaped by the Acela culture might not look askance at somebody who eschews a life devoted to paying back horrendous college loan debts for the dubious privilege of sitting in courses on Transgender Poetry or The Crusades as Western Imperialism. And the Constitution doesn't mandate a college degree for presidents.

After all, Harry Truman, Walker’s fellow Midwesterner, didn't have a college degree either, and the haberdasher did okay. It bears noting that Truman, while not credentialed, was educated--self-educated. He brought historical literacy and courage to the highest office.

If you’d like to read the letters of a man steeped in history, you can do no better than Affection and Trust: The Personal Correspondence of Harry S. Truman and Dean Acheson, 1953-1971. Truman didn’t prattle on about the “arc of history”--whatever that is--because he was acquainted with the facts of history through deep and wide reading. He is a fitting correspondent for the blue-blooded, elegantly educated Acheson.

During the 2008 presidential campaign, I went to Richmond to observe Michelle Obama at a View-like event where women aired their grievances (not enough government!), and where the future first lady shared a few of her own, foremost among them the Obama family’s struggles with college debt. Quite revealingly, I thought, she said, "Barack and I had world-class educations," adding "otherwise we wouldn't be here." I wondered at the time: Could the fragile Obama promise not have survived, say, a large state university?

It was a telling remark. For the Obamas, their Ivy League education is seen as the sine qua non for their success. They may be underestimating themselves, but the point is that they believe this. Occupy Wall Street was populated in part by people who had degrees from good colleges but were unemployed and burdened by debt and aren’t likely to be president of the United States. Still, the lesson the president took from his own life is reflected in his belief that you can’t get anywhere without a degree. Scott Walker knows you can.

President Obama’s view of educational cachet, coupled with a lack of real life experience, has driven some disastrous policy prescriptions. President Obama wants to tinker with the way college loans are repaid and pour more of our tax dollars into making loans available—because, you know, without a degree, you are doomed. Unfortunately, these policies, which focus on increasing loans rather than bringing down exorbitantly high tuitions around the nation, won’t really help students.

If colleges know the government will come to the rescue, they don’t have to offer competitive tuitions. Scott Walker knows that you can walk away and not be doomed to a live of failure. If colleges knew people could do this, they might also grasp that ever escalating costs of education will at some point break the system. So let’s hope that, if Walker moves ahead, taxpayer dollar guzzling college administrators will get really, really scared.

We can expect more stories on Scott Walker and his college career. The Post story today is an indication that liberals think he is a threat. What better way to deal with the threat than to roll out the artillery and brand Walker as an ignoramus who couldn’t get through college. I leave to you the irony that this same press was incurious about President Obama’s college career. But I think that the college meme is going to backfire.

Most Americans are likely to be impressed by the spunk and fortitude of a guy who can make it despite not having gone to college. The Post’s contention that “Walker’s decision to quit college has been a lingering mystery” is probably not going to be such a mystery to parents who are lying awake nights wondering how to finance college educations for their children. The article describes Walker as Marquette’s “suit-wearing, Reagan-loving politico.” But might he also have been six-figure debt shunning?