Fed Lays It On Thick: Powell's Ode To Keep His Job

Charles Payne
|
Posted: Sep 23, 2021 12:37 PM
Share   Tweet
The opinions expressed by columnists are their own and do not necessarily represent the views of Townhall.com. 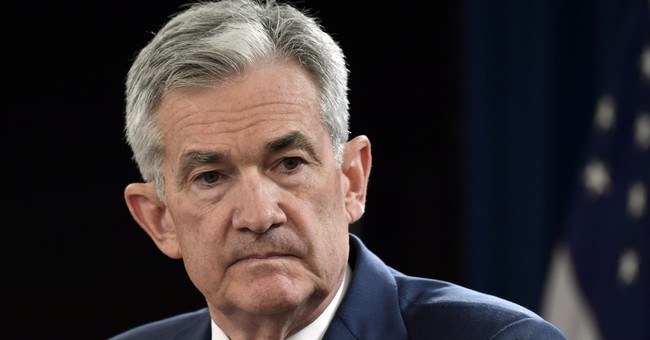 Wow. It looks as if Jay Powell lost a lot of his chill since his Jackson Hole, Wyoming speech. He was more hawkish about policy and took a firmer position on the tapering timeline. It’s what investors claim they wanted – a straight shooter on tapering. He also seemed on edge about questions on actual rate hikes, although his frustration might have been more about his colleagues than reporters.

Yesterday, while all the major equity indices closed higher, they all came down from where they were when the Federal Open Market Committee (FOMC) decision was announced (2:00 PM) and when Jay Powell began his question-and-answer session (2:30 PM). I was surprised the market didn’t finish lower. The December tapering is official.

The Fed updated its economic projections with a sharp decline in GDP for the current year with corresponding sharp increases in unemployment and inflation. What’s interesting is the Fed sees everything snapping back next year almost in perfect symmetry.

How likely is it the demand will linger for that long without some demand destruction from higher unemployment and inflation? The Fed didn’t even address housing and rents, nor was Powell asked by reporters that were more intrigued with the juicy story of Fed officials trading the market.

Powell on the obvious:

“Labor market should continue to improve, although job gains slowed markedly in August.”

Powell is a little disingenuous:

"No one knows with any certainty where the economy will be a year or more from now."

Powell’s ode to keep his job:

“The central bank can't shield financial markets or the U.S. economy from severe damage should Congress fail to lift the nation’s debt limit in coming weeks.”

“I was not aware of Fed presidents Kaplan and Rosengren’s trading.”

There were more advancers than decliners and up volume was significantly higher than down volume, but there were more 52-week lows than highs on the NASDAQ Composite.

It’s a beautiful sea of green, but those specks of red reflect companies dealing with bad news. Or in the case of Facebook (FB), it’s a series of bad news, including questions about the growth rates of Facebook and Instagram. I’m not sure when Mark Zuckerberg’s Metaverse goes live, but they might want to speed up the process.

We are watching Boeing (BA) to see if these sectors could finally take-off and gain altitude, while parsing through Energy (XLE) and Financials (XLF) for stand-out names.

The ten-year yield has been in an ascending triangle formation, but it is closer to breaking lower, pointing to a sharper move lower. This chart formation is typically bullish, as the breakout is more often than not to the upside.

All eyes are on the yield, as it made a dramatic spike this year that sent everyone back to the drawing board and got most of the Street to get out of growth and into value stocks. Initially, that looked smart; now, many are trapped by ego more than the market’s message.

By the way, the “buy the dip” crowd is bidding up Evergrande, the Chinese property company at the center of an international death watch. It rallied 26% yesterday. Be nimble, my friends, be nimble.

We added two Consumer Discretionary names and two names in Energy. We are fully vested.

Crude oil was quiet this morning, but I think it is poised for a big pop. Inventories are at the lowest level since October 2018, and the pace of global demand will come on stronger over the next six months.

West Texas Intermediate sees a big test of resistance beginning at $73.95, and breakout with close above $75.25. We’ve added SM and PXD back to the new buy list as their underlying fundamental proposition have improved even without the potential macro drivers. For more details reach out to your rep or research desk.

This could be the inflection point session – need a strong close.