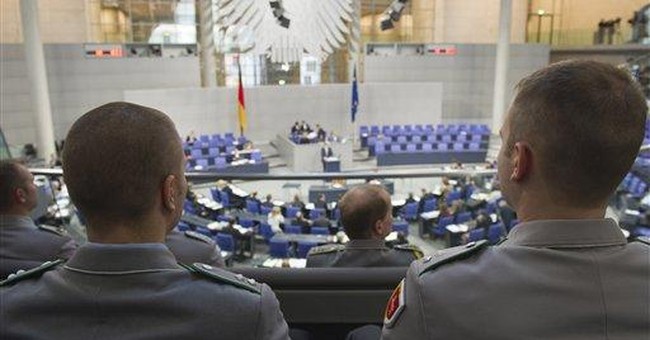 We shall never surrender -- unless the war gets too expensive, in which case, we shall quote Eisenhower on "the need to maintain balance in and among national programs" and then insist that "we can't simply afford to ignore the price of these wars."

The quotes are from President Obama's West Point speech announcing the Afghanistan troop surge. What a strange speech it was -- a call to arms so ambivalent, so tentative, so defensive.

Which made his last-minute assertion of "resolve unwavering" so hollow. It was meant to be stirring. It fell flat. In August, he called Afghanistan "a war of necessity." On Tuesday night, he defined "what's at stake" as "the common security of the world." The world, no less. Yet, we begin leaving in July 2011?

Does he think that such ambivalence is not heard by the Taliban, by Afghan peasants deciding which side to choose, by Pakistani generals hedging their bets, by NATO allies already with one foot out of Afghanistan?

Nonetheless, most supporters of the Afghanistan War were satisfied. They got the policy, the liberals got the speech. The hawks got three-quarters of what Gen. Stanley McChrystal wanted -- 30,000 additional U.S. troops -- and the doves got a few soothing words. Big deal, say the hawks.

But it is a big deal. Words matter because (BEG ITAL)will(END ITAL) matters. Success in war depends on three things: a brave and highly skilled soldiery, such as the U.S. military 2009, the finest counterinsurgency force in history; brilliant, battle-tested commanders such as Gens. David Petraeus and McChrystal, fresh from the success of the surge in Iraq; and the will to prevail as personified by the commander in chief.

There's the rub. And that is why at such crucial moments, presidents don't issue a policy paper. They give a speech. It gives tone and texture. It allows their policy to be imbued with purpose and feeling. This one was festooned with hedges, caveats and one giant exit ramp.

No one expected Obama to do a Henry V or a Churchill. But Obama could not even manage a George W. Bush, who, at an infinitely lower ebb in power and popularity, opposed by the political and foreign policy establishments and dealing with a war effort in far more dire straits, announced his surge -- Iraq 2007 -- with outright rejection of withdrawal or retreat. His implacability was widely decried at home as stubbornness, but heard loudly in Iraq by those fighting for and against us as unflinching -- and salutary -- determination.

Obama's surge speech wasn't a commander in chief's, but a politician's, perfectly splitting the difference. Two messages for two audiences. Placate the right -- you get the troops; placate the left -- we are on our way out.

And apart from Obama's own personal commitment is the question of his ability as a wartime leader. If he feels compelled to placate his left with an exit date today -- while he is still personally popular, with large majorities in both houses of Congress, and even before the surge begins -- how will he stand up to the left when the going gets tough and the casualties mount, and he really has to choose between support from his party and success on the battlefield?

Despite my personal misgivings about the possibility of lasting success against Taliban insurgencies in both Afghanistan and the borderlands of Pakistan, I have deep confidence that Petraeus and McChrystal would not recommend a strategy that will be costly in lives, without their having a firm belief in the possibility of success.

I would therefore defer to their judgment and support their recommended policy. But the fate of this war depends not just on them. It depends on the president. We cannot prevail without a commander in chief committed to success. And this commander in chief defended his exit date (versus the straw man alternative of "open-ended" nation-building) thusly: "because the nation that I'm most interested in building is our own."

Remarkable. Go and fight, he tells his cadets -- some of whom may not return alive -- but I may have to cut your mission short because my real priorities are domestic.

Has there ever been a call to arms more dispiriting, a trumpet more uncertain?