Hope and Change - But Not for Iran 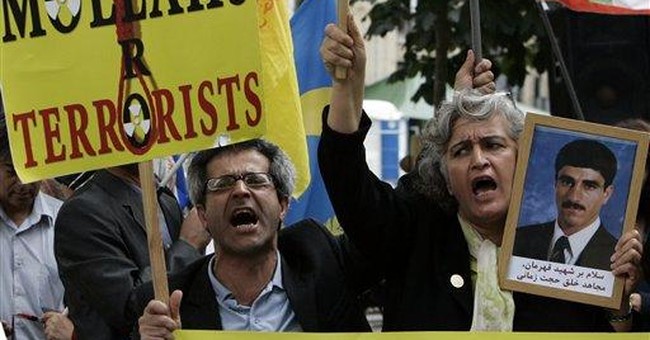 WASHINGTON -- Millions of Iranians take to the streets to defy a theocratic dictatorship that, among its other finer qualities, is a self-declared enemy of America and the tolerance and liberties it represents. The demonstrators are fighting on their own, but they await just a word that America is on their side.

And what do they hear from the president of the United States? Silence. Then, worse. Three days in, the president makes clear his policy: continued "dialogue" with their clerical masters.

Dialogue with a regime that is breaking heads, shooting demonstrators, expelling journalists, arresting activists. Engagement with -- which inevitably confers legitimacy upon -- leaders elected in a process that begins as a sham (only four handpicked candidates permitted out of 476) and ends in overt rigging.

Then, after treating this popular revolution as an inconvenience to the real business of Obama-Khamanei negotiations, the president speaks favorably of "some initial reaction from the Supreme Leader that indicates he understands the Iranian people have deep concerns about the election."

Where to begin? "Supreme Leader"? Note the abject solicitousness with which the American president confers this honorific on a clerical dictator who, even as his minions attack demonstrators, offers to examine some returns in some electoral districts -- a farcical fix that will do nothing to alter the fraudulence of the election.

Moreover, this incipient revolution is no longer about the election. Obama totally misses the point. The election allowed the political space and provided the spark for the eruption of anti-regime fervor that has been simmering for years and awaiting its moment. But people aren't dying in the street because they want a recount of hanging chads in suburban Isfahan. They want to bring down the tyrannical, misogynist, corrupt theocracy that has imposed itself with the very baton-wielding goons that today attack the demonstrators.

This started out about election fraud. But like all revolutions, it has far outgrown its origins. What's at stake now is the very legitimacy of this regime -- and the future of the entire Middle East.

The latter is improbable but, for the first time in 30 years, not impossible. Imagine the repercussions. It would mark a decisive blow to Islamist radicalism, of which Iran today is not just standard-bearer and model, but financier and arms supplier. It would do to Islamism what the collapse of the Soviet Union did to communism -- leave it forever spent and discredited.

In the region, it would launch a second Arab spring. The first in 2005 -- the expulsion of Syria from Lebanon, first elections in Iraq and early liberalization in the Gulf states and Egypt -- was aborted by a fierce counterattack from the forces of repression and reaction, led and funded by Iran.

Now, with Hezbollah having lost elections in Lebanon and with Iraq establishing the institutions of a young democracy, the fall of the Islamist dictatorship in Iran would have an electric and contagious effect. The exception -- Iraq and Lebanon -- becomes the rule. Democracy becomes the wave. Syria becomes isolated; Hezbollah and Hamas, patronless. The entire trajectory of the region is reversed.

All hangs in the balance. The Khamenei regime is deciding whether to do a Tiananmen. And what side is the Obama administration taking? None. Except for the desire that this "vigorous debate" (press secretary Robert Gibbs' disgraceful euphemism) over election "irregularities" not stand in the way of U.S.-Iranian engagement on nuclear weapons.

Even from the narrow perspective of the nuclear issue, the administration's geopolitical calculus is absurd. There is zero chance that any such talks will denuclearize Iran. On Monday, Ahmadinejad declared yet again that the nuclear "file is shut, forever." The only hope for a resolution of the nuclear question is regime change, which (if the successor regime were as moderate as pre-Khomeini Iran) might either stop the program, or make it manageable and nonthreatening.

And where is our president? Afraid of "meddling." Afraid to take sides between the head-breaking, women-shackling exporters of terror -- and the people in the street yearning to breathe free. This from a president who fancies himself the restorer of America's moral standing in the world.