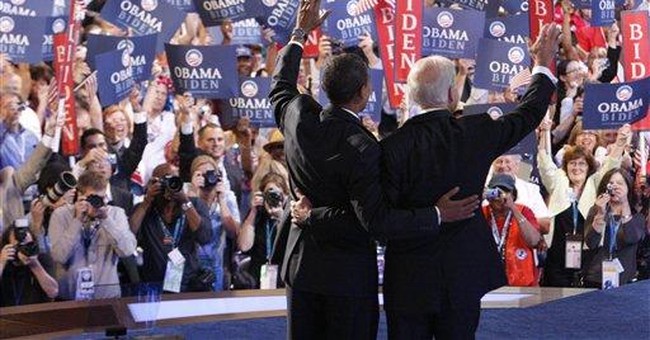 WASHINGTON -- Barack Obama is an immensely talented man whose talents have been largely devoted to crafting, and chronicling, his own life. Not things. Not ideas. Not institutions. But himself.

Nothing wrong or even terribly odd about that, except that he is laying claim to the job of crafting the coming history of the United States. A leap of such audacity is odd. The air of unease at the Democratic convention this week was not just a result of the Clinton psychodrama. The deeper anxiety was that the party was nominating a man of many gifts but precious few accomplishments -- bearing even fewer witnesses.

When John Kerry was introduced at his convention four years ago, an honor guard of a dozen mates from his Vietnam days surrounded him on the podium attesting to his character and readiness to lead. Such personal testimonials are the norm. The roster of fellow soldiers or fellow senators who could from personal experience vouch for John McCain is rather long. At a less partisan date in the calendar, that roster might even include Democrats Russ Feingold and Edward Kennedy, with whom John McCain has worked to fashion important legislation.

Eerily missing at the Democratic convention this year were people of stature who were seriously involved at some point in Obama's life standing up to say: I know Barack Obama. I've been with Barack Obama. We've toiled/endured together. You can trust him. I do.

Hillary Clinton could have said something like that. She and Obama had, after all, engaged in a historic, utterly compelling contest for the nomination. During her convention speech, you kept waiting for her to offer just one line of testimony: I have come to know this man, to admire this man, to see his character, his courage, his wisdom, his judgment. Whatever. Anything.

Instead, nothing. She of course endorsed him. But the endorsement was entirely programmatic: We're all Democrats. He's a Democrat. He believes what you believe. So we must elect him -- I am currently unavailable -- to get Democratic things done. God bless America.

Clinton's withholding the "I've come to know this man" was vindictive and supremely self-serving -- but jarring, too, because you realize that if she didn't do it, no one else would. Not because of any inherent deficiency in Obama's character. But simply as a reflection of a young life with a biography remarkably thin by the standard of presidential candidates.

Who was there to speak about the real Barack Obama? His wife. She could tell you about Barack the father, the husband, the family man in a winning and perfectly sincere way. But that only takes you so far. It doesn't take you to the public man, the national leader.

Who is to testify to that? Hillary's husband on night three did aver that Obama is "ready to lead." However, he offered not a shred of evidence, let alone personal experience with Obama. And although he pulled it off charmingly, everyone knew that, having been suggesting precisely the opposite for months, he meant not a word of it.

Obama's vice presidential selection, Joe Biden, naturally advertised his patron's virtues, such as the fact that he had "reached across party lines to ... keep nuclear weapons out of the hands of terrorists." But securing loose nukes is as bipartisan as motherhood and as uncontroversial as apple pie. The measure was so minimal that it passed by voice vote and received near zero media coverage.

Thought experiment. Assume John McCain had retired from politics. Would he have testified to Obama's political courage in reaching across the aisle to work with him on ethics reform, a collaboration Obama boasted about in the Saddleback debate? "In fact," reports the Annenberg Political Fact Check, "the two worked together for barely a week, after which McCain accused Obama of 'partisan posturing'" -- and launched a volcanic missive charging him with double cross.

So where are the colleagues? The buddies? The political or spiritual soul mates? His most important spiritual adviser and mentor was Jeremiah Wright. But he's out. Then there's William Ayers, with whom he served on a board. He's out. Where are the others?

The oddity of this convention is that its central figure is the ultimate self-made man, a dazzling mysterious Gatsby. The palpable apprehension is that the anointed is a stranger -- a deeply engaging, elegant, brilliant stranger with whom the Democrats had a torrid affair. Having slowly woken up, they see the ring and wonder who exactly they married last night.