Chad Savage
|
Posted: Mar 10, 2020 12:00 PM
Share   Tweet
The opinions expressed by columnists are their own and do not necessarily represent the views of Townhall.com. 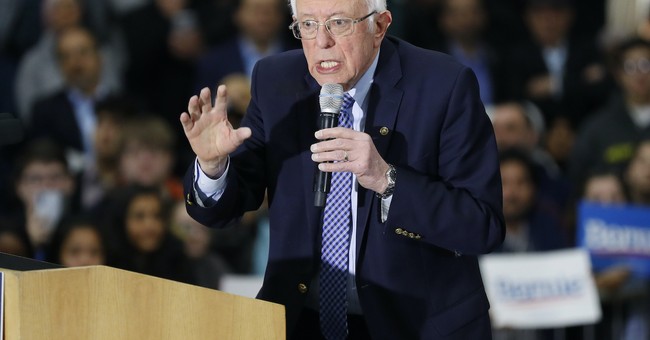 Sen. Bernie Sanders, a democratic socialist, is one of two candidates remaining in the race for the Democratic presidential nomination. Former New York Mayor Michael Bloomberg, a billionaire who recently dropped out of the Democratic race, is now spending a fortune trying to ensure President Donald Trump loses in November.

There’s a lot of talk about Bloomberg’s previous attempt at a soda ban and Bernie’s Medicare for All. But no one is talking about the insidious assumptions that animate these policies—or how they turn health care into a vehicle for stealing your personal liberty and implementing socialism.

Let’s back up a moment. In 2012, Bloomberg, then mayor of New York City, cited public health as he proposed limiting the size of soda that New Yorkers could purchase. In a country founded on freedom, this type of unprecedented government overreach directly conflicted with the liberties we enjoy in this country. So, how exactly did Bloomberg justify such an intrusion?

While it sounds like an argument with good intentions, this reasoning smuggles in an incredibly condescending assumption: “People are too dumb to choose their own beverages, so this measure is needed.”

This belief didn’t constitute legal ground for the soda restriction. Instead, the mayor said the soda ban would reduce health care spending paid for by the government.

Thus, to make this intrusion legally sound, they added another incorrect assumption: Soda makes people obese, obese people use more medical services, the government pays for these services, and the government can dictate behavior that could affect its health care expenses.

They argued that this government intrusion was justified as long as personal liberty ran afoul of government budgets. Missing from this reasoning was any explanation of why government felt entitled to take your money (taxes) to pay for health care in the first place.

The unstated belief was that government-funded health care provides financial security and prevents catastrophic personal financial loss. Government-funded health care, however, functions as the ultimate monopoly. Unlike private insurance, government could permit itself to pry into every aspect of our lives—since nearly anything we do can plausibly impact our health. This sacrifice of liberty for so-called safety is exceptionally dangerous.

Over 250 years ago, Benjamin Franklin warned of scenarios like this one: “Those who would give up essential Liberty, to purchase a little temporary Safety, deserve neither Liberty nor Safety.”

Ultimately, Bloomberg failed in his attempt to dictate soda size. A New York State appeals court ruled against him in 2013. But this case should serve as a warning of how government can use health care as an excuse for dramatic overreach.

Consider another example: Sanders is proposing a Medicare for All policy that promises to help. It will only succeed, however, in dramatically harming our freedom. Outlawing private insurance and trusting the government to make life-and-death health care decisions gives our liberty, and safety, a grim prognosis.

The point here isn’t the problem with one overambitious mayor trying to ban soda or one overzealous senator trying to take away your ability to purchase private health insurance. The point is the assumptions that undergird these dangerous policies: that government alone should pay for health care and make these decisions because you’re either too foolish or too irresponsible to choose for yourself.

Small government overreaches in health care can quickly spread to other areas of our lives. These small seeds of socialism can grow into trees that yield supremely bitter fruit — a dystopian future devoid of freedom.

Sure, it seems like a big jump from soda bans and Medicare for All to that nightmare. But it’s hard to turn around once we start down the dangerous road of ceding our freedoms to government bureaucrats.

Chad Savage, M.D. (info@d4pcfoundation.org) is a D4PCF policy fellow and the founder of the DPC practice YourChoice Direct Care in Brighton, Michigan.