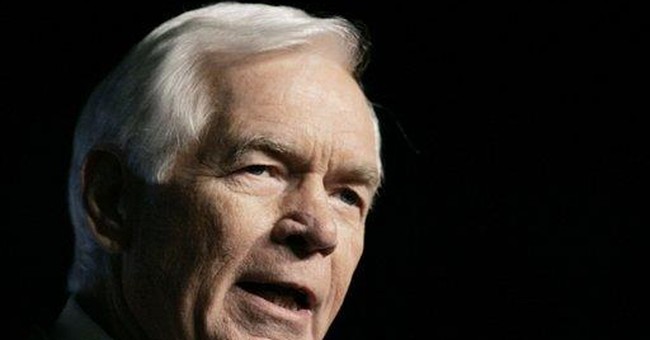 Trending
Congress is preparing to raise the Federal debt ceiling by a whopping $1.8 trillion. According to the Congressional Budget Office, the government will need to borrow $3 trillion for the two years 2009 and 2010. By contrast, it took America 219 years from 1789 to 2008 to amass $5.8 trillion in Federal debt. Before the Congress agrees to raise the national debt ceiling, it should approve measures to reduce deficit spending and balance the Federal budget.

Senators Judd Gregg (R-N.H.) and Kent Conrad (D-N.D.) have introduced legislation creating a bipartisan task force charged with producing a deficit-cutting plan that would be voted on in the Congress under expedited procedures. Gregg and Conrad are seeking to block the increase in the debt limit unless Congress approves their legislation. But according to Grover Norquist of Americans for Tax Reform: "Despite the appearance of protection for taxpayers, this commission would guarantee a net tax increase in its proposal. Every Democrat on the commission would insist on tax increases to 'balance' spending cuts in the recommendation."

Instead of guaranteeing a tax increase, which would hurt our struggling economy, here's a better approach: Bring back and update the Gramm-Rudman-Hollings emergency deficit-cutting law. Championed by former Sens. Phil Gramm (R-TX), Warren Rudman (R-N.H.), and Ernest Frederick "Fritz" Hollings (D-S.C.), the bipartisan Gramm-Rudman law was enacted in 1985, when Congress was under intense public pressure to reduce what was then considered an unheard-of budget deficit of $200 billion.

Specifically, Gramm-Rudman required Congress to meet year-by-year deficit-reduction targets, ending with a balanced budget by the end of 1991. If Congress missed those targets, the law triggered automatic across-the-board spending cuts - a process called "sequestration" - to reduce deficit spending to the mandated level.

Critics charged that Gramm-Rudman failed because Congress routinely missed the annual deficit-cutting targets by an average of $30 billion, and the budget was never balanced while the law was in effect. True, but all told, Gramm-Rudman did produce lower deficits: The fiscal 1989 deficit was about $100 billion lower than had been expected in 1985 without Gramm-Rudman, and deficits as a share of our national economy decreased from 5.8 percent to 3.8 percent from 1985 to 1989. Gramm-Rudman also curbed the growth of government spending from an annual average of 8.7 percent in the five years before the law to 3.2 percent in the five years it was in effect. Even entitlement-spending growth slowed to 5 percent annually as Congress trimmed mandatory spending to avoid draconian cuts in discretionary spending programs.

The 1990 budget deal suspended the automatic sequester and replaced the Gramm Rudman deficit-reduction targets with caps on discretionary spending and a pay-as-you-go requirement for direct spending and revenue legislation.

Here's what a new and improved Gramm-Rudman would look like: It would set annual deficit-reduction targets beginning in 2010 and ending with a balanced budget by 2016. Instead of annual dollar-amount deficit targets, the new Gramm-Rudman should have percentage of gross domestic product (GDP) deficit targets, starting at 10 percent of GDP in fiscal 2010 and declining in proportionate steps all the way down to zero in 2016. By setting annual deficit ceilings as a share of the economy, Congress would have more incentive to adopt pro-growth economic policies and avoid anti-growth policies such as increasing tax rates on work effort and investment or imposing value-added taxes.

The new deficit-control process should include all government expenditures in the across-the-board sequester except for interest payments and Social Security benefits. To avoid cheating and gaming, there also should be a second, "look-back" sequester to prevent Congress from back-loading spending programs to avoid the initial sequester, as it did in the late 1980s. For national and homeland security spending, the President would have the flexibility to protect specific defense and homeland spending from the automatic spending cuts.

Balancing the budget by 2016 is admittedly tough - some will say impossible. But it can be achieved through the combination of firm spending restraint and, most important, rapid economic growth. Remember, in the late 1990s, the Republican Congress and Mr. Clinton cut spending and reduced the capital-gains tax, which rapidly produced huge budget surpluses: From 1997 to 2000, the federal balance sheet went from a $21 billion deficit to a $236 billion surplus.