Immigrant Amnesty Has a Conservative History 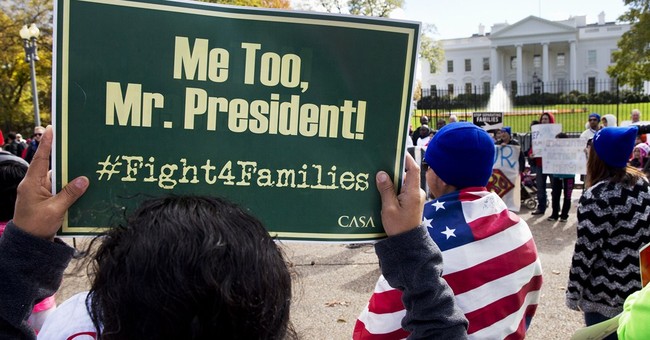 Here’s a pop quiz. Which president once said, "Illegal immigrants in considerable numbers have become productive members of our society and are a basic part of our work force”? Was it a liberal like Bill Clinton when he pushed for amnesty in 2000? Or, what about Barack Obama foreshadowing his forthcoming executive actions?

Actually, it was Ronald Reagan. As hard as it is to believe only three decades later, such pro-immigrant policy used to be a cornerstone of conservative politics. Many immigrants, after all, epitomize the American dream, traveling far from a foreign country with little other than the hope for a better life after some hard work. As President Obama considers extending amnesty to millions of immigrants who have already established roots in the United States, it’s important to reconsider Reagan’s actions as a conservative compass.

President Reagan worked with Congress to pass the Immigration Reform and Control Act of 1986 (IRCA). The law extended amnesty to over four million immigrants who had been living in the United States prior to 1982 while beefing up border security and legal repercussions for employers that hired undocumented labor. This paradigm of stricter rules with compassionate enforcement continued into the presidency of George H.W. Bush, who imposed a “family fairness” program by executive fiat that provided approximately 1.5 million children and spouses of immigrants covered under the 1986 law to remain in the country. Congress quickly formalized the policy with the Immigration Act of 1990 by providing a legal pathway to citizenship for family members of immigrants who have received amnesty.

Subsequent studies following the IRCA immigrants have found that most moved out of poverty. In fact, one 2009 study by the Immigration Policy Center found that “IRCA immigrants age 25-34 years in 1990 experienced an increase of 41 percentage points in home ownership rates by 2006.” Contrary to the popular myth of the lazy immigrant mooching off of welfare, immigrants as a group are more entrepreneurial than native-born Americans. In fact, 40 percent of Fortune 500 companies were founded by immigrants or their children. One 2010 study by the Competitive Enterprise Institute estimates that an immigrant is 30 percent more likely to start a business than a native-born American.

Hard work and entrepreneurship are conservative values, so it’s hard to grapple why Congressional Republicans are now threatening to sue or even impeach President Obama for taking executive action on amnesty. The details of Obama’s plan remain unclear as of the time of writing but may include a pathway to citizenship for parents of children who are US citizens. Republicans may object that such an action is an unconstitutional overreach of the president’s executive authority, but, again, it is not unprecedented. President Bush enforced a very similar policy in 1989 at first through executive action and later through Congress.

Of course, it would be better for the President to follow Reagan and Bush’s footsteps of working with congress to exact reform, but is such a strategy even conceivable given today’s GOP? Considering that such attempts at legislative reform went nowhere in the Republican-controlled House of Representatives over the past two years, it seems like a philosophical shift must first occur among conservatives towards a more compassionate immigration policy. Conservatives must once again embrace the words of Reagan who reminded us, “Our nation is a nation of immigrants.” Let us pay homage to the spirit of freedom and entrepreneurship that made America great by welcoming the people who value both the most — immigrants.