The True Price of Obamacare 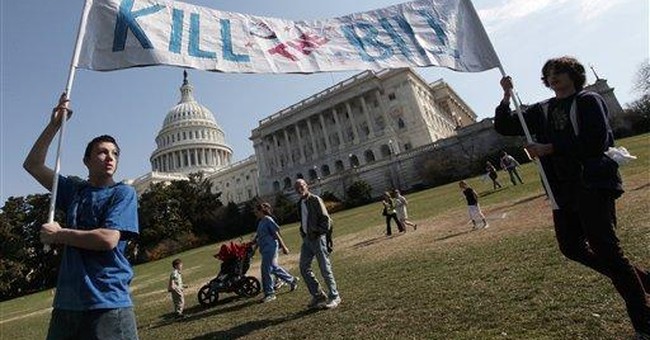 The Messiah sacrificed his life to save all who believed in Him, offering them eternal life. In contrast, the Obamessiah has called on his followers in the House of Representatives to sacrifice their political lives in order to save his presidency in pursuit of health care legislation that’s massively unpopular in the country.

Perhaps the biggest problem for Obama and the Democrats is this: Even though they have railroaded a “victory” on the health care bill, it will be a pyrrhic one. The President has revealed a ruthless arrogance – and the complete absence of any decent respect for the opinions of a majority of his fellow Americans – that will prove costly to him in the long run.

Health care is an issue that will touch each and every American (aside from our elected representatives, who are conveniently exempted from the “reform” the President is attempting to impose on the rest of us). If the staged presidential health care “summit” proved anything, it was that there are principled differences between the parties when it comes to reforming health care. Rather than acknowledging that truth and using the best ideas from both sides, however, the President attributed any congressional disagreement with him only to the basest motives – selfish political gain, a desire to block all reform, an improper embrace of the insurance companies (ironic, coming from an administration that itself sought to make a deal with “Big Pharma”), and indifference to the plight of suffering Americans.

But the contempt the President has manifested for his congressional opponents pales in comparison to the disregard he has shown for the honest objections of American citizens – many of whom voted for him. When a deep blue state voted a Republican into Ted Kennedy’s Senate seat, largely on the basis of his opposition to ObamaCare, the President and Democrats simply changed the rules of the game, attempting to shoehorn a massive expansion of the welfare state into a procedure intended to correct minor discrepancies between House and Senate legislation.

Apparently, House Rules committee member (and impeached, then removed judge) Alcee Hastings (D-FLA) was right when he insisted, “There are no rules here . . . we simply make them up as we go along.” But Americans understand that a Congress with “no rules” is a frightening beast – especially when its lawlessness is actively encouraged by the nation’s Chief Executive.

The underhanded process through which passage has been pursued highlights the dramatic deficiencies of the health care overhaul bill. Democrats – with their largest congressional majorities in years – wouldn’t have had to resort to a procedural trick like reconciliation if the substance of the bill warranted support on the merits. Nor would the President and his congressional allies have had to offer so many special deals: The union tax exemption, the Louisiana Purchase, the Cornhusker Kickback, the UConn – the list of infamy goes on, with no doubt more to come when the final bill can finally be scrutinized. And there would have been no need to rush the vote through before the bill’s costs could be thoroughly analyzed and digested.

Americans, a majority of whom oppose the health care bill, can see through all of this. They aren’t stupid. But apparently, their president believes that many of them are – they simply don’t understand the beneficence of the legislation that he is prepared to force upon them, presumably for their own good. As for the rest, it seems he thinks they’re wickedly opposing a bill that would benefit others for nothing more than their own selfish reasons.

Can a president successfully govern a nation when he apparently believes that a majority of its citizens are either stupid or wicked? We shall see. One thing, however, is certain: In a dazzling irony, through the ugly procedural health care “reform” drama in which he has embroiled the country, the most enthusiastically pro-government president in recent American history has demonstrated once and for all just how corrupt, cynical and inept government can be.

In the wake of this debacle, many of Obama’s Democrat allies in the House of Representatives will no doubt be the first lambs to the slaughter. But because her citizens are now more divided, demoralized, disillusioned – and disrespected – than ever, America as a whole is suffering for the Obamessiah’s triumph.