Is Everyone A Little Bit Racist? 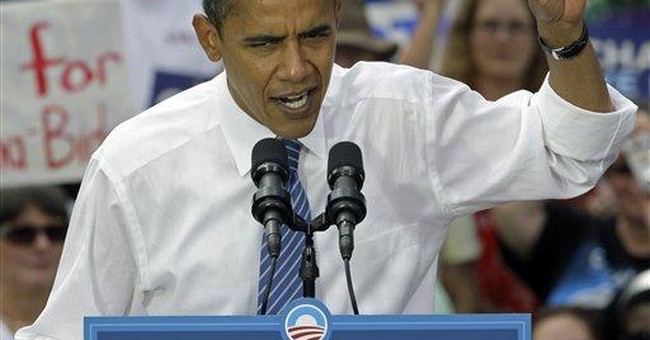 If Barack Obama’s primary campaign had had a Broadway theme song, surely it would have been “One Enchanted Evening” from “South Pacific;” Democrats saw “a stranger from across a crowded room” and fell for him – hard. But in the general election, the words have changed and the song no longer remains the same. Last week, it became clear that the Rogers & Hammerstein classic has been replaced by an anthem from the modern Broadway hit “Avenue Q”: “Everyone’s A Little Bit Racist.”

CNN’s Jack Cafferty surely spoke for legions of Obama supporters – and doubtless, a good deal of the press – when he proclaimed that it “doesn’t make sense” that the presidential polls remain neck-and-neck “unless it’s race.” In fact, by week’s end, the Associated Press was touting a poll it conducted with Yahoo News finding that one-third of Democrats “harbor negative views toward blacks.” From that, AP reporters concluded, “the percentage of voters who may turn away from Obama because of his race could easily be larger than the final difference between the candidates in 2004.” In other words, they claimed that voter racism alone could cost Barack Obama the election.

Certainly, the meme perfectly encapsulates elite views on the “latent racism” of regular Americans. The only problem? It’s logically flawed. It suggests that just because some voters may “harbor negative views” about African Americans in the abstract, they will refuse to vote for this particular African-American candidate just on that basis.

The piece undermines its own premise by conceding, “Many whites who see blacks in a negative light are still willing or even eager to vote for Obama.” Of course they are. Despite even negative preconceptions, people are capable of evaluating specific individuals on their own merits. That’s why – so long as he remains vigorous and seems in good health -- John McCain can still hope to win over those who generally believe that the seventy-plus set belongs in retirement homes, not The White House.

Or take gender as an example. No doubt plenty of men who would label women as “flighty” or “over-emotional” in the abstract are ardent supporters of Sarah Palin. And feminists like Gloria Steinem – who have eagerly purveyed negative stereotypes about men in general – have been enraptured with Bill Clinton, a man whose personal behavior encapsulates everything they purport to oppose.

It’s time to accept the fact that almost everyone (including America’s elite) stereotypes others – consciously or unconsciously, favorably or unfavorably – on the basis of age, gender, race, ethnicity, religion, socio-economic status and a myriad of other characteristics. Indeed, Barack Obama himself has done it, with his comments about the “bitter” people “clinging” to guns and religion; similarly, most of the liberal rage at Sarah Palin stems from her refusal to conform to many Democrats’ cherished stereotype of a “woman leader.”

But the mere fact that stereotypes exist doesn’t mean they’re determinative. The AP report admits, “Race is not the biggest factor driving Democrats and independents away from Obama.” In fact, more Americans are concerned about his competence – and should be worried about his far left policies, inexperience, naivete and obvious discomfort with American exceptionalism. Chances are, if Obama can address those issues, the matter of his race will largely take care of itself.

Although it’s tempting for his supporters to blame his defeat prospectively on the bigotry of the American public, in truth, it’s almost impossible to predict how and whether Barack Obama’s race will hurt him. Many Americans, especially the young, have been attracted to Obama – not despite his race – but because of it. After all, it’s hard to imagine a white, first-term politician, from a northern state and with the most left-wing voting record in the Senate having been made his party’s standard bearer four short years after first emerging on the national scene. What’s more, Obama enjoys nearly unanimous support among blacks, and can count on unprecedented voter turnout in the African American community. Most importantly – contrary to many elite stereotypes – the American public is both decent and fair, and its members will vote accordingly.

Ultimately, all the energy expended on frenzied societal self-flagellation about stereotyping would be better spent on recognizing and correcting for the biases that all of us have. And that’s a process that would be infinitely easier if robust discussion about our misunderstandings and differences hadn’t become so taboo. As the cast sings at the conclusion of “Everyone’s a Little Bit Racist,” if “everyone stopped being / So PC / Maybe we could live in /Harmony!”