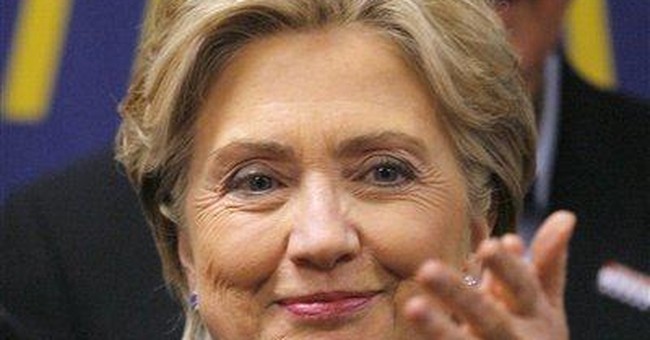 In the Capitol rotunda, there’s a piece of marble etched with the faces of famous women like Susan B. Anthony and Elizabeth Cady Stanton. But part of it will remain conspicuously untouched – bare until the image of the first female President is carved upon it. Given her victory last week in the New Hampshire primary, it’s entirely possible that Hillary Clinton’s will be the face that joins Anthony’s and Stanton’s on the sculpture.

For some time, Hillary has embraced (some would even say exploited) her status as the first female ever to be a serious contender for the presidency, presenting herself as a champion for all women. But just as Bill Clinton sold out almost every political or ideological ally at one time or another for his own political advantage, Hillary is poised to do the same thing -- by engaging in behavior that resurrects the worst stereotypes about female leaders, even as it advances her own quest for power.

Commentators far and wide have acknowledged the political benefits to Clinton of her emotional display during a meeting with New Hampshire voters after her third place finish in the Iowa caucuses. The New York Daily News’ Helen Kennedy observed that Hillary’s “smashing primary success Tuesday came after showing a little female vulnerability, emotion and weakness.” A member of the Obama team credits Hillary’s “choking up” for her come-from-behind victory in the nation’s first primary.

They may well be right. Hillary’s weepiness offered a glimpse at the inner life of a candidate who too often seems unattractive – almost inhuman – in her hectoring, rigidity and relentless pursuit of power. But although her tears helped Clinton as an individual candidate, they certainly make life more difficult for any woman who follows in her footsteps. After all, it's fair for voters to ask: If a tough old bird like Hillary dissolves into tears when the going gets tough, what woman wouldn't?

The behavior that some believe clinched Clinton's New Hampshire victory raised other serious questions: If Hillary is tearing up publicly over a single political defeat in the earliest phases of the presidential election process, how exactly would she (or any woman) handle the dispiriting setbacks that inevitably come with holding the most powerful office in the world? And is an image of “female vulnerability” – however politically advantageous to Hillary personally, now or in the future – really what Americans want to project to Islamofascists around the world?

Nor were her tears the only setback Hillary dealt the cause of women in politics last week. When two men – dolts, to be sure – disrupted a Clinton event by raising signs and chanting “Iron my shirt!” Hillary immediately responded with some bitterness, “"Oh, the remnants of sexism, alive and well tonight.” With that, she immediately lent credence to the all-too-widely held suspicion that lurking within even the most powerful professional woman is a humorless feminist, ready (even eager) to denounce men as sexist pigs.

For Hillary herself, it made good political sense to play the victim, and her gambit to elicit sympathy and fellow-feeling from women in the crowd seems to have worked. But how much more admirable would she have been if her reply had reflected a mature recognition that some people – men and women alike – are simply idiots, to be dismissed with grace and good humor? She could easily have demonstrated a particularly female kind of resilience had she joked, "Well, it certainly looks like someone needs to iron your shirts – just for starters – and, by the way, when’s the last time you guys showered?!”

Ultimately, no one can justly claim the mantle of a feminist pioneer if she ends up creating more, not fewer, barriers for the women who will one day seek to succeed her. After all, part of the reason that Anthony and Stanton have been immortalized in marble in the nation’s Capitol is because they actually succeeded in improving the quality of life not so much for themselves as for those who came after them.

As Hillary uses every sniffle and lecture to bring her one step closer to the job she’s yearned for so fiercely and so long, it would be good if she thought about the kind of trail she’s blazing for the next female presidential hopeful, Democrat or Republican. But then, thinking of others has never been the Clinton way.