In Pakistan, They Trust

Caroline Glick
|
Posted: Jan 12, 2016 10:22 AM
Share   Tweet
The opinions expressed by columnists are their own and do not necessarily represent the views of Townhall.com. 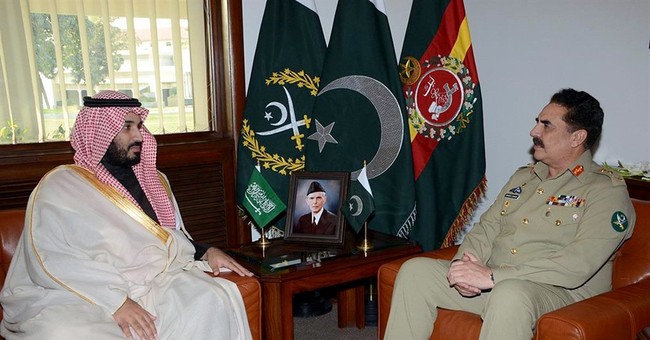 It is a testament to the precarious state of the world today that in a week that saw North Korea carry out a possible test of a hydrogen bomb, the most frightening statement uttered did not come from Pyongyang.

It came from Pakistan.

Speaking in the military garrison town of Rawalpindi, Pakistani Army chief Gen. Raheel Sharif said that any Iranian threat to Saudi Arabia’s territorial integrity will “wipe Iran off the map.”

Sharif made the statement following his meeting with Saudi Arabia’s defense minister and Deputy Crown Prince Mohammed bin Salman. According to media reports, Salman was the second senior Saudi official to visit Pakistan in the past week amid growing tensions between Iran and the kingdom.

Salman’s trip and Sharif’s nuclear threat make clear that following the US’s all-but-official abandonment of its role as protector of the world’s largest oil producer, the Saudis have cast their lots with nuclear-armed Pakistan.

When last October, the USS Harry Truman exited the Persian Gulf, the move marked the first time since 2007 that the US lacked an aircraft carrier in the region. Nine years ago, the US naval move was not viewed as a major statement of strategic withdrawal, given that back then the US had some one hundred thousand troops in Iraq.

While the USS Truman returned to the Gulf late last month, its return gave little solace to America’s frightened and spurned Arab allies. The Obama administration’s weak-kneed response to Iran’s live-fire exercises on December 26, during which an Iranian Revolutionary Guards vessel fired rockets a mere 1,370 meters from the aircraft carrier as it transited the Straits of Hormuz, signaled that the US is not even willing to make a show of force to deter Iranian aggression.

And so the Saudis have turned to Pakistan.

It would be foolish to view Sharif’s nuclear threat as mere bluster.

By every meaningful measure, Pakistan is little more than a failed state with nuclear weapons. Pakistan appears in every global index of failed or failing states.

To take just a few leading indicators, as spelled out by Basit Mahmood in a report last summer for The Political Domain, barely 1% of Pakistanis pay taxes of any kind. More than half the population lives in abject poverty. The government has no control over most Pakistani territory.

Public health is a disaster. Polio, eradicated throughout much of the world, is now galloping through the country.

Last summer more than 1,300 people died in a heat wave in the supposedly advanced city of Karachi.

These data do not take into account the wholesale slaughter and persecution of minority groups – first and foremost Christians – and the systematic denial of basic human rights and widespread, violent persecution of women and girls.

As for its nuclear arsenal, a 2010 report by the Bulletin of Atomic Scientists estimated that Pakistan possesses between 70 and 90 nuclear warheads. Other credible reports estimate the size of the arsenal at 120.

Pakistan refuses to adopt a no-first strike policy. In the US and worldwide, it is considered to be the greatest threat to global nuclear security.

Following a Pakistani jihadist assault on the Indian parliament in late 2001, India and Pakistan both deployed forces along their contested border. In the months that followed, due to Pakistani nuclear threats, the prospect of nuclear war was higher than it had ever been.

In 2008, following the Pakistani jihadist assault on Mumbai, India threatened to retaliate against Pakistan.

India’s threats rose as evidence mounted that, as was the case in 2001, the jihadists were tied to Pakistan’s ISI spy service. Once again, rather than clean its own house, Pakistan responded by threatening to launch a nuclear attack against India.

And now, following the unraveling of US-strategic credibility, Pakistan’s aggressive nuclear umbrella is officially coming to the Persian Gulf.

Saudi Arabia’s decision to turn to Pakistan for protection indicates that the second wave of the destruction of the Arab state model is upon us. The notion of Arab states was invented almost 100 years ago by the British and French at the tail end of World War I. The Sykes-Picot agreement, which partitioned the Arab world into states, rewarded national dominion to the most powerful tribal actors in the various land masses that became the states of the Arab world.

With the possible exception of Egypt, which predated Sykes-Picot, the Arab states formed at the end of World War I were not nation states. Their populations didn’t view themselves as distinct nations. Rather the populations of the Arab states were little more than a hodgepodge of tribes, clans and sectarian and ethnic groupings. In each case, the British and French made their determinations of leadership based on the relative power of the various groups. Those chosen to control these new states were viewed either as the strongest factions within the new borders or as the most loyal allies to the European powers.

The first wave of Arab state collapse began six years ago. It submerged the non-royal regimes, which fell one after the other, like houses of cards.

Egypt, which in the space of two years experienced both an Islamist revolution and a military counter-revolution, still teeters on the brink of collapse.

Lebanon will likely break apart at the slightest provocation.

Today we are seeing the opening stages of the collapse of the Arab monarchies, and most importantly, of Saudi Arabia.

Most of the international attention to Saudi Arabia’s current threat environment has focused on Iran. The Iranian threat to the Saudis has grown in direct proportion to the Obama administration’s determination to realign the US away from its traditional Sunni allies and towards Iran. The conclusion of the US-led nuclear pact with Tehran has exacerbated Iran’s regional aggression as it no longer fears US retaliation for its threats to the Sunni monarchies.

But Iran is just the most visible of three existential threats now besetting the House of Saud.

The most profound threat to the world’s largest oil power is economic.

The drop in world oil prices has endangered the kingdom.

As David Goldman reported last week in the Asia Times, according to an International Monetary Fund analysis, the collapse in Saudi oil revenues “threatens to exhaust the kingdom’s $700 billion in financial reserves within five years.”

The house of Saud’s hold on power owes to its oil-subsidized economy. As Goldman noted, last month dwindling revenues forced the Saudis to cut subsidies for water, electricity and gasoline.

According to Goldman, Riyadh’s mass execution of 43 long-jailed prisoners at the start of the month was an attempt by the aging royal house to demonstrate its firm control of events. But the very fact the Saudi regime believed it was necessary to stage such a demonstration shows that it is in distress.

The third existential threat the regime now faces is Islamic State. Since 1979, the Saudis have sought to deflect domestic opposition by promoting Wahabist Islam at home and Wahabist jihad beyond its borders.

Now, with Islamic State in control over large swathes of neighboring Iraq, as well as Syria and Libya and threatening the Saudi-supported Sisi regime in Egypt, the Saudi royal family faces the rising threat of blowback. Some analysts argue that given the popular support for jihad in Saudi Arabia, were Islamic State to cross the Saudi border, its forces would be greeted with flowers, not bullets.

If the House of Saud falls, then the Gulf emirates will also be imperiled.

The Egyptian regime, which is bankrolled by the Saudis and its Gulf allies will also be endangered. The Hashemite monarchy in Jordan, which is protected by the US and by Israel, will face unprecedented threats.

The implications of expanding chaos – or worse – in Arabia are not limited to the Middle East. The global economy as well as the security of Europe and the US will be imperiled.

Obviously, the order of the day is for the US security guarantee to Saudi Arabia to be reinforced, mainly through straightforward US action against Iranian naval aggression and ballistic missile development.

Unfortunately, the Obama administration can be depended on to take just the opposite approach. And as a consequence, at least for the next year, the main thing propping up the Gulf monarchies, and with them, the global economy and what passes for global security, is a failed state with an itchy finger on the nuclear trigger.