The Newest Round of War 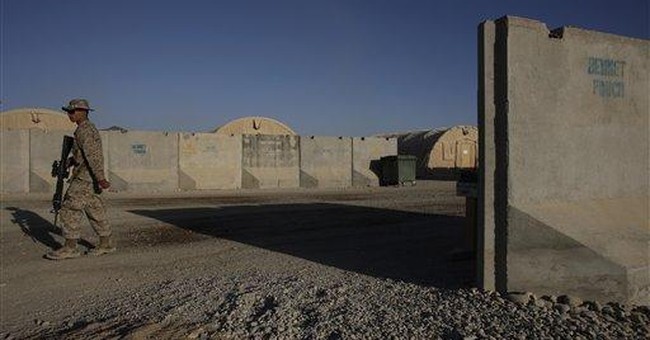 An atmosphere of fantasy pervaded US President Barack Obama's Middle East peace processor George Mitchell's meetings with Israeli leaders on Thursday. In separate photo opportunities, Mitchell stood next to President Shimon Peres and Defense Minister Ehud Barak and pledged to surmount all obstacles to achieve peace not only between Israel and the Palestinians but between Israel and Syria and Lebanon and with the whole Arab world.

Mitchell's remarks were even more stunning than similar statements from him during previous visits, because this week the Palestinians launched their newest terror campaign against Israel. Like previous rounds of Palestinian terror against Jews beginning in 1929, the latest round has been precipitated by wholly fabricated claims by Muslim leaders that Israel is asserting Jewish rights to the Temple Mount - Judaism's most sacred site - and so endangering the Muslim claim to the sole right to worship at the site that was never even mentioned in the Koran.

Beginning last week, convicted felon Raed Salah - who served a prison sentence for his Israeli Islamic Movement's northern branch's financial and other ties to Hamas - began inciting Israeli and Palestinian Muslim worshipers to make war against Israel. As he does every few months, Salah claimed falsely that Jews were committing the unforgivable "crime" of seeking to worship on the Temple Mount during Succot. Succot, which we observed this past week, is of course one of the three harvest festivals in which Jews are commanded to go up to the Temple Mount. This time, Salah's lies were accompanied by similar ones from Hamas leaders and Fatah leaders alike.

As is their standard practice, Palestinian leaders used known euphemisms in their declarations of war. Rather than openly call for Jews to be slaughtered, they called on Muslims to defend the Temple Mount from fictional Jewish assault. Wheelbarrows of rocks were found stockpiled on the Temple Mount on Monday. The rocks made clear the intention of Muslim leaders to reenact the 1990 stoning of Jewish Succot worshipers at the Western Wall. That Muslim assault precipitated a steep increase in Palestinian terror during the months that followed.

This week's riots similarly recall the 1996 Palestinian onslaught. That aggression was justified by the false Palestinian allegation that Prime Minister Binyamin Netanyahu's decision to open the Western Wall archeological tunnel was part of a secret plot to dislodge the Aksa Mosque. Yasser Arafat used his manufactured libel as an excuse to order his US-trained and Israeli-armed Palestinian security forces to open fire at IDF soldiers. In the violence that followed some 15 soldiers were killed.

The most violent exploitation of fabricated claims of Jewish aggression against Judaism's most sacred site to date, of course, came in September 2000. Then Arafat and his deputies in Fatah supported by Hamas and the Israeli Islamic Movement claimed that then-opposition leader Ariel Sharon's September 28, 2000, visit to the Temple Mount - a visit that had been coordinated in advance with the PA - was an act of war against the Palestinians and against Islam as a whole. More than 1,500 Israelis were killed in the seven years of terror war that followed.

Perhaps the most overt call for a renewal of jihad against Israel this week came from Fatah leader and titular PA President Mahmoud Abbas. In an interview on Yemenite television, Abbas said, "The second intifada erupted because of Sharon's visit to [the Temple Mount] and... it lasted seven years. This time, therefore the matter of Jerusalem requires a much greater effort [by the Palestinians], something more practical. It's not enough to talk about Jerusalem in books, or to give sermons in mosques. There is a need to work for it."

THE NEWEST round of violence has been building up for the past month. According to data released by the IDF, over the past month, the volume of terror attacks nearly doubled, from 53 attacks in August to 95 in September. This week's spike in violence caused IDF commanders to warn of the possibility that the violence will spread throughout Judea and Samaria. With the near seamless integration of Arab Israeli leaders in the incitement of violence, there is good reason for concern that Arab Israelis will play a prominent role in the newest round of jihad against Israel.

Abbas and his prime minister Salaam Fayad have augmented their violent attacks against Israel with a renewed diplomatic assault against the Jewish state. Fayad and Abbas have both called for the US and European governments to condemn Israel's imaginary provocations and moves to "Judaize" the eternal capital of the Jewish people. Rather than condemn these Fatah leaders for their key roles in inciting violence, the Europeans have been embracing them. Led by Sweden, which holds the rotating EU presidency, European governments have demanded that Israel end its provocative behavior.

For its part, rather than dismissing these obviously false allegations out of hand, the Obama administration demanded that Israel give an accounting of its actions to prove that it is not provoking Palestinian violence.

How long the newest Palestinian campaign lasts, and how many Israelis will be killed is still unknown. Due in large part to their military training provided by the US under Lt.-Gen. Keith Dayton, Fatah forces in Judea and Samaria are today better trained and equipped than ever before. In Gaza, Hamas is preparing for a new round of war by housing poor Palestinians along the border with Israel to make it difficult for Israel to defend itself without killing Hamas's civilian shields. At the same time, the IDF remains stronger than these Palestinian forces. So Israel's eventual victory over this new terror campaign is a foregone conclusion, contingent only on the political courage of its leaders.

SINCE THE Palestinians must know that their new terror campaign will end in an Israeli victory, it is worth considering why they have anyway decided to launch it. Four explanations come to mind.

First, it is notable that the calls for jihad are being sounded three weeks before Hamas and Fatah leaders are scheduled to meet in Cairo to reinstate their unity government pending a new round of parliamentary and presidential elections next year. It is possible that in inciting a new terror war against Israel, Abbas and Fayad and their comrades in Fatah are signaling Hamas that they will be willing collaborators in a Hamas-dominated government.

Then, too, since Hamas is favored to win both of those elections, Fatah leaders may be using their calls for jihad to increase their popularity among Palestinians ahead of a possible bid to cancel the elections or in anticipation of the likely derailment of the negotiations toward a unity government. Whatever the case, the looming talks between Hamas and Fatah no doubt figure prominently in the new round of anti-Jewish violence.

The second reason for the renewal of Palestinian violence against Israel and the use of false allegations of Jewish provocations on the Temple Mount as a justification for that violence is that Fatah leaders believe that they can use their campaign to convince the Obama administration to redouble its pressure on Israel to make massive concessions to the Palestinians even before any "peace" negotiations begin. This was Arafat's goal in inciting the 1996 violence. At that time, his gambit was wildly successful. Then-US president Bill Clinton responded to the Palestinian violence by blaming Netanyahu and forcing him to begin negotiating the IDF's redeployment from parts of Hebron.

There is also the possibility that Raed Salah - the most visible force behind this week's Temple Mount riots - is using them to jockey for a more powerful position in the Israeli Arab-Palestinian leadership hierarchy. Inspired by the Hamas takeover of Gaza and Hizbullah's chokehold on the Lebanese government, Salah may have decided that the time is ripe for Israeli Arabs to raise their profile in the jihadist pecking order.

The fourth possible explanation for the current round of violence is that it is being incited by the Syrian and Iranian governments who together control Hamas and are influential in Fatah and Israeli Arab circles. Iranian and Syrian interest in provoking such violence now is clear. If the Netanyahu government and the IDF are kept busy contending with Palestinian terrorism, it will be more difficult for them to address Iran's nuclear weapons program either diplomatically or militarily.

All of these possible causes of the violence shed light on how events are likely to progress. Future events, after all, will in large part reflect the interests of the parties involved in inciting the current attacks against Israel.

BY THE same token, the European and American responses to Palestinian calls for violence against Israel and Jews show how the newest round of Palestinian aggression against Israel is likely to be greeted by the West. In its easy willingness to accept false Palestinian accusations about imaginary Israeli provocations, the EU is demonstrating that a transformation has taken place in its policy toward the Arab conflict with Israel. Whereas in the past the EU has been a more or less neutral actor in the region - officially refusing to support either side, while unofficially siding with the Palestinians against Israel - the European position on the Palestinian violence over the past week has been indistinguishable from the Arab League's position. Europe's newfound willingness to openly side with the Palestinians against Israel makes clear that the EU's role in the violence to come will be qualitatively different from the role it has played in past Palestinian terror campaigns. Israel's ability to launch a relevant and coherent diplomatic campaign to defend itself is contingent on the Foreign Ministry recognizing that a transformative shift has taken place in Europe's treatment of Israel.

And this brings us back to George Mitchell in Jerusalem. What Mitchell's absurd statements about peace breaking out in the region in the near future show is that the Obama administration is perfectly willing to pretend away the Arab violence against Israel. Whether motivated by naivete, an overarching desire for international peace conferences, a plan to align US foreign policy with that of Europe, or hostility toward Israel, the fact that Mitchell can talk about peace when the Palestinians have just declared war makes clear that the Obama administration is uninterested in playing a constructive role in quelling the violence. It certainly isn't interested in helping Israel to secure the lives of its citizens.

Israeli officials have sought to play down the significance of the events this week in Jerusalem. This is a mistake. If the newest round of violence is to end quickly and at a minimal cost in lives, it is essential for Israel to stop defensively humoring Mitchell and move quickly to offense, both militarily and diplomatically.