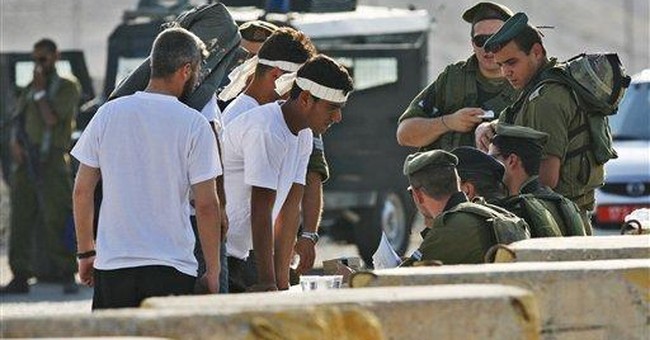 Monday will mark the third anniversary of the forcible expulsion of the Jews of Gaza and northern Samaria from their homes. Those expulsions were followed weeks later by the withdrawal of IDF personnel from the Gaza Strip.

Unlike the Rabin-Peres government's decision to embark on the Oslo peace process with the PLO in 1993, Ariel Sharon's withdrawal from Gaza did not take years to be discredited. It took moments.

As the last IDF personnel left Gaza, the Palestinians began torching the synagogues Israel abandoned. Within minutes of Israel's withdrawal from Gaza's border with Egypt, the Palestinians blew up the border wall. They immediately began transferring unprecedented quantities of heavy weaponry into Gaza - a practice that has continued to this day.

Another important distinction between the Oslo policy and the withdrawal policy is that at least Oslo asked the Palestinians to give Israel something in exchange for the land, money, arms and political legitimacy Israel lavished on them. As events would show, Israel asked the Palestinians for too little. But at least Israel asked them for something. The withdrawal policy, in contrast, demanded nothing from the Palestinians. It was simply an unconditional surrender of land. As a result, Hamas -- the terror group which has distinguished itself from Fatah by refusing to even pay lip service to peace -- was the chief beneficiary of Israel's retreat.

The first harbingers of Hamas's ascendance to power came the day after Israel completed its withdrawal. Tens of thousands of armed Hamas terrorists, clad in spanking new uniforms, goose-stepped through the streets of Gaza in their victory parade. The then-ruling Fatah government's own parade was dingy and poorly attended in comparison.

Hamas's pageantry was followed with the jihadist group's decisive electoral victory over Fatah in January 2006. This led to the further weakening of Fatah in March 2007 with the signing of the Mecca accord that rendered Fatah a junior member of Hamas's ruling coalition. The Mecca accord also signaled a shift in the Arab world's sympathies from Fatah to Hamas. That agreement then paved the way for Hamas's violent ouster of Fatah forces from Gaza in June 2007 and its rising challenge to Fatah's leadership in Judea and Samaria.

It should be pointed out that Hamas's victory over Fatah was not a victory of extremists over moderates in any real sense of the terms. Both Hamas and Fatah share the aim of destroying Israel. This was made clear most recently in the lead-up to the Annapolis conference last November. As US Secretary of State Condoleezza Rice announced the coming of peace, Fatah leader Mahmoud Abbas refused to recognize Israel's right to exist.

Moreover, there is little to distinguish between the groups' embrace of terrorism as a means of achieving their aim of destroying Israel. Fatah forces have carried out more attacks against Israel than Hamas has.

Hamas's refusal to even pretend that it is willing to live at peace with Israel is what distinguishes it from Fatah. And the Palestinians' embrace of Hamas after Israel withdrew from Gaza demonstrated that the withdrawal increased the popularity of the prospect of continuous war against Israel among the Palestinians.

Hamas's rise to power has changed the nature of the Palestinian conflict with Israel in a fundamental way. It is not simply that Hamas has abandoned the rhetoric of Arab nationalism for the rhetoric of Islamic jihad and so changed the nature of the Palestinian war from a limited struggle to an unlimited war for Islamic domination.

Unlike Fatah, which was beholden to several Islamic countries at once, Hamas is a wholly-owned Iranian proxy. Consequently Gaza, like Lebanon, has become an Iranian colony. And as Hamas's star rises in Judea, Samaria, Jerusalem and within the Israeli Arab community, Iran's influence over events in those quarters rises. This was made clear this week with the revelation that Khaled Kashkoush, an Israeli Arab from Kalansuwa, last month became the latest Israeli Arab arrested for spying for Hizbullah.

GIVEN THE absolute, obvious failure of the Gaza withdrawal, what is most distressing about the initiative is that three years on, Israeli society has managed not to discuss why it failed or to learn the lessons stemming from its failure. There has been no chastening of the political leaders involved. No heads have rolled. There has been no official inquiry into how decisions regarding the withdrawal were made. Indeed, many of the plan's chief proponents have prospered.

Prime Minister Ehud Olmert succeeded Sharon to power due in large part to his support for the plan. Foreign Minister Tzipi Livni built her entire political career on her role as one of the architects of the expulsion of Israeli civilians from their homes. And today she is the frontrunner to succeed Olmert as head of Kadima and replace him as prime minister until the next elections are held. Her chief opponent, Transportation Minister Shaul Mofaz, was defense minister during the operation and an active participant in implementing the ill-conceived initiative.

In contrast, those who opposed the withdrawal remain in the opposition. They are never recognized for their attempts to divert their country from this disastrous course. Indeed, they continue to be castigated as somehow extremist for the fact that they oppose basing Israel's national strategies on capitulation and faith in other people's willingness to defend us.

There are three main reasons that there has never been an accounting for the failure of the withdrawal from Gaza. The first reason is luck. Sharon got "lucky." He was felled by a debilitating stroke and slipped into a coma before the dimensions of the failure of his most significant policy became widely understood.

Since Sharon pushed the withdrawal plan through against the wishes of his government colleagues, his voters and his party by turning the plan into a popularity contest that pit himself against his opponents, once he was gone, there was no way to hold him to account. And his incapacitation itself made discussing the failure of the withdrawal somehow unseemly. After all, it was said, the poor man can no longer defend himself, how dare you add insult to injury by noting that his most significant action while in power imperiled the country? In this manner, not only Sharon, but all his supporters in his government, were immunized from criticism and the need to account for their strategic imbecility.

Israel is presented with a similar situation today with Olmert. Like Sharon, Olmert has not had to face the voters to account for his failures in the Second Lebanon War; for his refusal to act against Hamas's Iranian-backed regime in Gaza; or for his apparent willingness to expand on those failures by seeking to withdraw from Judea, Samaria, Jerusalem and the Golan Heights and so enable Iranian proxies to surround Israel on all sides.

And now, with his announcement that he will leave office not for his substantive incompetence but for his suspected criminal activities, Olmert has removed the substantive causes of his failure in office from the national agenda. In so doing, he has immunized his cohorts, and particularly Livni and Defense Minister Ehud Barak, from the need to account for their continued strategic imbecility.

The most recent example of this high-speed bungling is the government's penchant for releasing terrorists from prison. The public has scarcely had a chance to digest the colossal stupidity and inherent danger of the government's terrorists-for-dead-hostages swap with Hizbullah last month. No serious review of that policy - which enhanced Hizbullah's popularity sufficiently to compel the Lebanese government to formally accept its right to attack Israel at will - has been conducted. And already on Wednesday, fresh from that failure, Olmert announced his intention to expand it by releasing another 150 terrorists from prison by the end of the month.

THE FINAL reason that the failed Gaza withdrawal has not led to any change in either the public discourse or in the general tenor and direction of government policy is because of the debilitating impact the withdrawal had on Israeli democracy. In order to build the public's support for his inhumane and strategically irredeemable decision to expel 10,000 Jews from their homes and destroy their communities in Gaza and northern Samaria in exchange for nothing, Sharon and his colleagues worked systematically to demoralize, disenfranchise and criminalize his political opponents.

He demoralized them by castigating them as criminals, extremists and enemies of the people in general. He disenfranchised them by ignoring the results of the Likud's referendum on his plan that he himself initiated.

In all his activities, Sharon received crucial assistance from the law enforcement system and the media which were themselves corrupted by his plan. As Ha'aretz's left-wing military commentator Amir Oren noted five months after the plan was carried out, Sharon was given a free ride by Israel's elites due to their common "hatred of the settlers."

To enable Sharon to carry out the expulsions they so desired, the state prosecution, backed by the Supreme Court, was willing to close corruption probes of Sharon. As retired Supreme Court justice Michel Cheshin explained, "If Sharon had stood trial, there would have been no disengagement."

More egregiously, as public protests against the withdrawal gained force, Israel's law enforcement system became a tool of political repression, and the media became apologists for that repression. The police conducted mass arrests of law-abiding demonstrators, used brutal force against them and suspended the civil rights of opponents of the plan. The state prosecution and the courts sent thousands of protesters - including children - to jail for weeks and months without filing charges against them.

Then too, Sharon's personalization of the withdrawal distorted the country's public discourse by moving it from substantive discussions of government policies to superficial discussions of personalities. And this transformation has remained in effect until today. It was most recently in evidence in the media's rendering of the debate over the terrorists-for-dead-hostages swap as the personal struggle of the Goldwasser and Regev families against the government.

Sharon's successful repression and castigation of his opponents, and Olmert's successful repetition of Sharon's behavior both in the brutal repression of demonstrators at Amona in February 2006 and in his dismissive attitude towards the protest movement in the wake of the Second Lebanon War, have imbued the public as a whole with a sense of powerlessness. This sense manifested itself with the historically low voter turnout in the 2006 elections.

Israel's prolonged failure to reckon with the disastrous outcome of the Gaza withdrawal bodes ill for the country's prospects. Until the country reckons with the mistakes that led to that withdrawal, and forces those responsible to account for their failings, we will be doomed to repeat those mistakes with those same incompetents leading us over and over and over.