Carl Jackson
|
Posted: Oct 02, 2018 12:01 AM
Share   Tweet
The opinions expressed by columnists are their own and do not necessarily represent the views of Townhall.com. 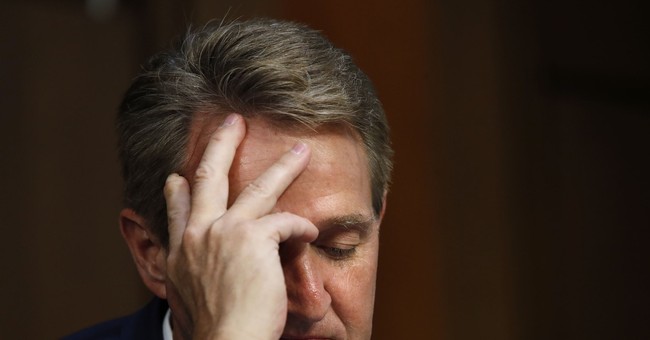 Can you imagine if Sen. Jeff Flake had to endure the additional week of hell he unleashed on President Trump’s Supreme Court nominee, Judge Brett Kavanaugh, last Friday?

Flake couldn’t even handle being cornered in an elevator by a woman claiming to be a sexual assault survivor. Yet, because he supposedly saw the light on how Kavanaugh’s confirmation process, in lieu of Dr. Christine Blasey Ford’s accusation of sexual assault, was “tearing the country apart,” within hours he reneged on his word to confirm Kavanaugh on the Senate floor. Instead, he voted him out of the committee, contingent upon a seventh FBI investigation, totally acquiescing to the Democratic scheme to delay Kavanaugh’s confirmation until after the midterm elections at any cost.

Sen. Flake may have had great intentions, but unfortunately despite his years in the swamp, he failed to learn a valuable lesson: You can’t make honorable deals with indecent people.

For example, Sen. Kamala Harris, is reportedly a conceited diva that treats her staffers badly and loves to live the high-life at the taxpayer’s expense, and by the way, she’s running for president. Sen. Dianne Feinstein is responsible for sitting on Ford’s letter for 6 weeks before dropping the bombshell on the Senate Judiciary Committee, when the FBI could’ve been investigating the allegations all along. Sen. Cory Booker, admitted to groping a drunken teenager without her consent in a column he wrote while at Stanford University decades ago. He too, is running for president. Sen. Richard Blumenthal, lied about his involvement in the Vietnam War. Apparently, Sen. Mazie Hirono believes all of her male constituents need to “shut up.” Then you have Sen. Sheldon Whitehouse that questioned Judge Kavanaugh about farting – our tax dollars at work! Sen. Dick Durbin made a total spectacle of his questioning by badly reenacting a scene from Tom Cruise’s movie “A Few Good Men” when questioning Kavanaugh. Then of course, Senators Chris Coons and Amy Klobuchar, were expected to be the grown ups on the Democratic side but had already announced a no vote for Kavanaugh despite his answers. Talk about a charade!

I’m empathetic to credible victims of any type of violent crime. Twenty years ago, I was the victim of a violent crime myself. Likewise, several women in my family and a couple of old friends were raped, not groped. Most of these attacks occurred two to three decades ago. Yet, despite the gap in time, they can describe their attacker and the events surrounding their attack in vivid detail to this day. I understand that each case is different. However, it is still hard for me to believe that the only thing Dr. Ford can remember in detail is the alleged assault itself.

Furthermore, over the weekend, Rachel Mitchell, the prosecutor who questioned Ford at the Senate hearing, detailed in a five-page memo nine reasons why Christine Blasey Ford’s case is even weaker than a “he said, she said” case. Here are the nine reasons as outlined by Rachel Mitchell and reported by NBC News:

If Sen. Jeff Flake was honestly concerned about how the Kavanaugh confirmation hearings were “tearing the country apart,” his request to delay the confirmation yet again sure didn’t succeed in bringing the nation closer together. All he’s done is contribute to the smear campaign of a good man, a good citizen and a good friend and father who should be applauded not scorned.