Calvin Beisner
|
Posted: Mar 16, 2016 12:01 AM
Share   Tweet
The opinions expressed by columnists are their own and do not necessarily represent the views of Townhall.com. 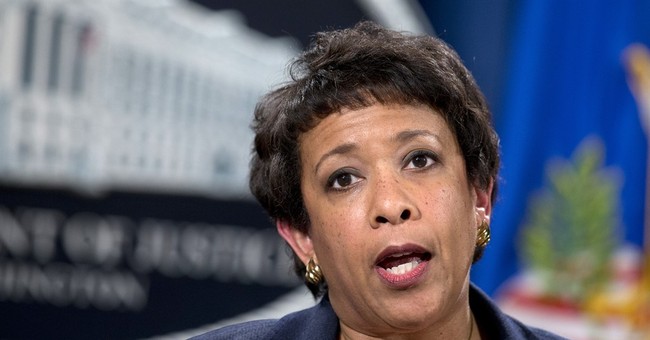 In 1779 Thomas Jefferson wrote in Virginia’s Statute of Religious Freedom, “Truth is the proper and sufficient antagonist to error, and has nothing to fear from the conflict, unless, by human interposition, disarmed of her natural weapons, free argument and debate.”

That conviction found its way into the First Amendment to our Constitution as “Congress shall make no law … abridging the freedom of speech, or of the press ….”

Attorney General Loretta Lynch seems not to have gotten the message. She told the Senate Judiciary Committee March 9 she has discussed possible civil actions against “climate change deniers” (whatever those are) and “referred it to the FBI to consider whether or not it meets the criteria for which we could take action.”

Her rationale, and that of Sen. Sheldon Whitehouse (D-RI), who has called for such action for nearly a year now, is that “climate change deniers” are analogous to tobacco industry apologists who intentionally suppressed scientific evidence of the dangers of smoking. That wasn’t just free speech, which the First Amendment protects, but fraud (“some deceitful practice or willful device, resorted to with intent to deprive another of his right, or in some manner to do him an injury”), which it doesn’t.

For smoking, the path of harm was eminently clear, for both correlation and causal mechanism, and had been for several decades by the time President Clinton’s Justice Department prosecuted tobacco companies in the 1990s.

But for climate change, or—to be more precise, since the other side likes so much to obscure the real subject of debate—dangerous, manmade climate change, the evidence is far less so.

That carbon dioxide is an infrared-absorbing gas (misnamed a “greenhouse gas,” since it doesn’t work as a greenhouse does) is universally recognized. That adding it to the atmosphere is almost certain therefore to raise global average temperature (GAT), all other things being equal, is almost universally recognized. That human additions of CO2 to the atmosphere have therefore probably contributed to the rise in GAT since the Industrial Revolution is nearly as widely acknowledged.

But after that, there is enormous divergence of opinion among qualified scientists, precisely because “all other things” aren’t equal. There are hundreds of climate feedbacks the magnitude of which we still don’t know, and some the sign (positive or negative—warming or cooling) we still don’t know. Therefore we cannot know how much net warming will come from an increment of CO2.

The U.N. Intergovernmental Panel on Climate Change (IPCC) claims 95% confidence that anthropogenic CO2 caused “most” (meaning over 50%) of the recent warming, although there are no underlying numbers from which that 95% confidence level was calculated (meaning it’s “expert judgment,” i.e., a hunch), and plenty of climate scientists contest it. But let’s assume that’s right.

Of course the IPCC claims future warming, not past, will be catastrophic. Yet its scenarios show all of mankind wealthier, several times over, by the end of this century and the next, even if we do nothing to slow global warming. Why? Because the same fossil fuel energy that drives the warming also drives economic growth. And with that added wealth comes reduced vulnerability to pretty much every risk to health and life imaginable, climate related or not.

In short, the case for harm from CO2 emissions from fossil fuel use is extremely tenuous even if we grant the IPCC’s estimates of 1.5–4.5°C (with “best estimate” of 3.0°C) of warming in response to doubled CO2 concentration. And because that “best estimate” calls for GAT to rise at a rate two to three times faster than actually observed over the relevant period, and because natural contributors to GAT’s rise can’t be ruled out, that estimate is almost certainly high by a factor of two, three, or more.

That is why estimates of climate sensitivity (how much warming comes from doubled CO2) published in refereed journals have been declining over the last fifteen years or so, with various experts estimating it at from 0.3–2.0°C, which is below what the IPCC considers the danger threshold.

Then, unlike with smoking, there are the offsetting benefits: Rising atmospheric CO2 causes increased plant growth all over the world, making more food available for animals and people—especially the poor, and energy from fossil fuels makes people wealthier and so healthier and longer lived.

So it will be far more difficult to prove fraud on the part of “climate change deniers”—in or out of the fossil fuel industry—than it was with the tobacco industry.

I suspect Lynch and Whitehouse know this and that ultimately there will be no prosecutions. But the threat has a chilling effect. Some climate scientists will be afraid to publish disagreements or even do research that might provide evidence against alarmism.

That is bad news for science, which thrives on vigorous, open, unimpeded debate, even over matters on which there is overwhelming consensus (such as the belief, which prevailed for decades, that peptic ulcers were caused by excess stomach acid and spicy foods—a belief overturned in the 1980s when it was proved that most are caused by bacterial infection, a discovery that won the Nobel Prize).

There should be no lynch mob against freedom of speech, press, and scientific inquiry. They are the friends of truth, liberty, and human well-being. The enemies are those who would squelch them.