Cal Thomas
|
Posted: Mar 02, 2021 12:01 AM
Share   Tweet
The opinions expressed by columnists are their own and do not necessarily represent the views of Townhall.com. 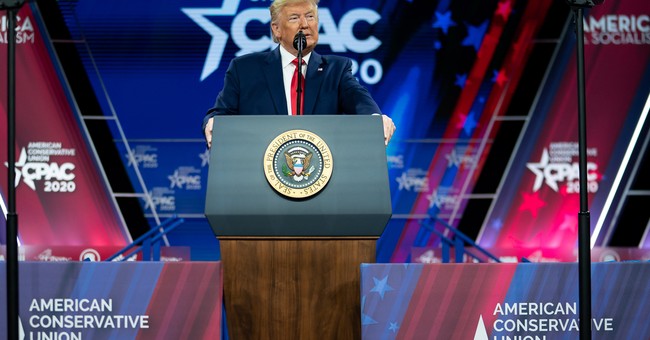 Former president Donald Trump emerged from 38 days of self-enforced silence for a lengthy speech at the Conservative Political Action Conference (CPAC) in Orlando, Florida, that was frequently interrupted with boisterous applause and chants from an adoring, mostly white and older crowd.

He was spot-on in his indictment of the five-week-old Biden administration, accusing the new president of lying about his "radical far-left" agenda during the campaign. Predictably, he also slammed the "fake news" for what he said was their assistance in covering up that agenda.

Conservatives will not disagree with Trump when it comes to the issues he mentioned. These issues included Biden allowing more immigrants to unlawfully cross our southern border and resuming a so-called "catch-and-release" policy Trump ended, the killing of the Keystone XL pipeline, which has led to lost jobs and higher energy prices, rejoining the Paris climate agreement and withdrawing Trump's restoration of UN sanctions on Iran, and the reversal of his energy policies, which Trump claims caused gasoline prices to soar by "30 percent" since he left office. He predicted a gallon of gas could eventually cost "$5 $6 $7" dollars unless those policies are reversed.

Trump touched on "cancel culture," transgender men who would "destroy women's sports" and by implication suggested Biden is cozying up to China because of his "close personal relation" with Beijing, a not-so-subtle dig at Hunter Biden and his business dealings with the communist country.

Some TV commentators said it was "unprecedented" for a former president to attack his successor so soon after leaving office. That doesn't fly given the attacks by Democrats against Trump from the time he announced his candidacy, through the 2016 campaign and his four years as president, including two impeachment trials and two acquittals.

The contrast between Trump's high energy and Biden's near-empty tank is stark. There is also that special bond between Trump and his supporters that Biden does not appear to enjoy with Democrats. When was the last time you heard an audience chant "we love you" to any Democratic president, or any other Republican?

All was going swimmingly from a conservative perspective until the moment I hoped would not happen. Trump had to revisit the November election and repeat claims that have been debunked and proven false. It was unnecessary. His calls for voting reform, including voter identification, signature matching, "one-day voting" and the use of absentee ballots for people who are legitimately absent on Election Day and for members of the military overseas, was all fine and defensible. The rest was not. We have heard it so many times. Most people can repeat it from memory.

Trump criticized several Republican senators and House members by name. All voted to impeach and remove him from office after he left the White House. He called them "Rinos" (Republicans in name only). In doing so he violated what Ronald Reagan used to call the 11th Commandment: "thou shalt not speak ill of any fellow Republican."

How does his slamming fellow Republicans who admittedly have criticized him, foster unity in the party? Trump promised not to create a third party. He was right when he said Democrats mostly stand together. He said he intends to help Republicans take back the Senate and House in 2022 and the White House in four years.

He coyly hinted he might run again in 2024, which brought wild cheering. But four years is forever in politics and a CPAC poll showed strong approval for Florida Governor Ron DeSantis should Trump not run. DeSantis and South Dakota Governor Kristi Noem (who came in third in the poll) delivered speeches full of substance and style.

There was plenty to like in Trump's address, but as usual he stepped on good issues by returning to conspiracy theories and charges that the election was stolen from him. It is why Republicans in four years might choose someone who embraces Trump's policies, but who has a different personality.