Cal Thomas
|
Posted: Feb 18, 2021 12:01 AM
Share   Tweet
The opinions expressed by columnists are their own and do not necessarily represent the views of Townhall.com. 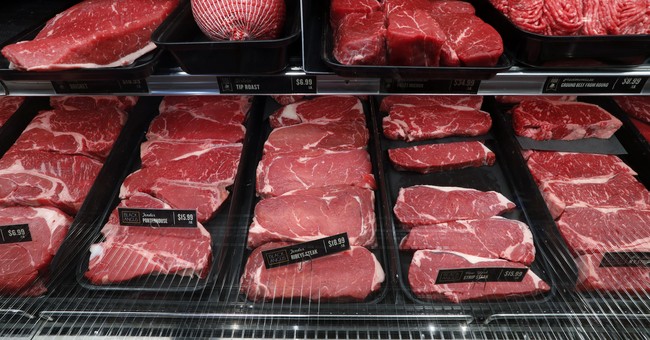 What is it about people who are successful in one field and believe that gives them credence to serve as an expert in a totally unrelated field?

Bill Gates, the founder of Microsoft and reportedly the fourth richest person on the planet, now self-identifies as a climate expert, and not only an expert, but a fervent disciple of the latest religion for the non-religious, which would be "climate change."

In a new book, "How to Avoid a Climate Disaster," Gates takes the rhetoric to a new and hysterical level when he claims the battle against changing climate is "an all-out effort, like a world war, but it's us against greenhouse gases."

As all statists do, he urges "regulation to force people to eat synthetic meat."

Gates invests in a synthetic meat company called Beyond Burgers. Anyone else see a potential conflict of interest? He's not alone. Al Gore, the original "Chicken Little" of climate panic, has lobbied for climate policies that limit meat while his firm invests $200 million in meat substitutes.

Bill Gates also believes cow flatulence contributes to climate change but told a CNN interviewer he doesn't know how to control it. Since there are more humans on Earth than cows, I wonder why he doesn't go after human gas emissions?

Like most people of a certain worldview, Gates tries to have it both ways. He says, "It's true that my carbon footprint is absurdly high. For a long time I have felt guilty about this." The message? You can continue to live like a plutocrat, as long as you feel guilty about it and donate money to organizations and causes favored by your ideological fellow travelers. Gates adds, "I am aware that I'm an imperfect messenger on climate change ...so who am I to lecture anyone on the environment?"

Even The Guardian newspaper expresses skepticism about Gates' goal of "carbon neutrality" in a decade, calling it "a fairytale."

Are we seeing a pattern? Government and "experts" have already robbed us of some of our liberties, using the pandemic as their excuse. The Biden administration wants more gun laws, which will only be obeyed by people who obey laws, but not by criminals who are, by definition, lawbreakers. Now comes Bill Gates proposing restrictions on our food choices and lifestyles while he continues to fly around the world on his private jet (like Biden's "climate envoy" John Kerry) and presumably eats whatever he wants.

Liberty is fragile. When it is lost to the state and regulators, it is difficult to get back. Like the frog in the kettle story, the heat is being slowly turned up on us. If we continue to willingly bow to the state, it will think it has permission to further erode liberties until they are either gone, or so rare we won't recognize the country we once loved.

In the film "The Matrix," the character Cypher says to the agent known as "Mr. Smith: "I know this steak doesn't exist. I know when I put it in my mouth the Matrix is telling my brain that it is juicy and delicious." In a sense, Cypher is eating fake meat.

The World Economic Forum is also promoting fake meat. It says a printer can print up to six kilograms of the stuff in an hour. They expect we will get used to it, as we do over time with many lies that become accepted truth.

Wendy's, the fast-food chain, used to run a TV ad that promoted their hamburgers. It ended with an old woman shouting, "Where's the beef?"

It could be a shout by meat lovers everywhere unless we tell our "masters" we have had enough. Isn't that at least part of the explanation for the rise of Donald Trump and why so many still support him?