The State of President Trump

Cal Thomas
|
Posted: Feb 06, 2020 12:00 AM
Share   Tweet
The opinions expressed by columnists are their own and do not necessarily represent the views of Townhall.com. 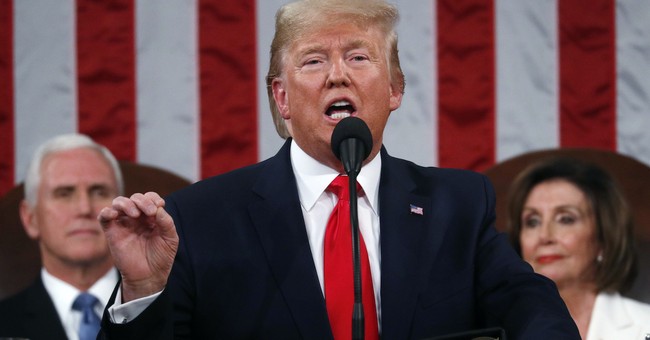 The president's State of the Union speech Tuesday night resembled a campaign rally. Some Republicans shouted "four more years" as he approached the lectern. Democrats mostly looked glum, shook their heads, pursed their lips, laughed in response to some of his remarks and in the case of Speaker Nancy Pelosi appeared to be talking to herself. At the end, she tore up her copy of the address, and Trump refused to acknowledge her before stepping down from the platform.

This was more than a victory lap for the president. It was a celebration of all he and Republicans have accomplished the last three years. The latest Gallup poll reflects the public's recognition of those achievements with 49 percent of those polled approving the president's performance, up 10 points since November. Yes, 50 percent still disapprove of him, but based on what? It can't be the economy, which he again touted as strong and getting stronger. According to Gallup, 63 percent approve of his economic policies.

Mr. Trump made a strong case for school choice, putting a face on "failing government schools" by introducing a young African American girl and her mother from Pennsylvania. The governor, he said, recently vetoed an Opportunity Scholarship bill, but the president said he was offering her a scholarship so she and her mother could choose a better school.

There was the dramatic moment when the president brought back from Afghanistan Sergeant First Class Townsend Williams, who had been on his fourth tour, and reunited him with his wife, Amy, and their two children. Tears flowed.

Speaking of tears, when was the last time you saw radio talk show host Rush Limbaugh cry? He did as he received from Melania Trump the Presidential Medal of Freedom. Limbaugh announced on Monday he has advanced lung cancer. Many Democrats refused to applaud. This is what hate does to some people.

The president directly and indirectly got in digs at Democrats, including former President Barack Obama, by noting the millions he said had been removed from welfare and food stamp rolls. "We've created 5.3 million new jobs, and importantly, added 600,000 new manufacturing jobs," he said, though, according to AP and ABC News fact-checkers, that number is actually "4.9 million jobs created since February 2017, including 454,000 manufacturing jobs."

In another of his many pro-life statements, the president introduced a woman and her 2-year-old child. "In 2017," he said, "doctors at St. Luke's hospital in Kansas City delivered one of the earliest premature babies ever to survive. Born at just 21 weeks and six days, and weighing less than a pound, Ellie Schneider was born a fighter. Through the skill of her doctors -- and the prayers of her parents -- little Ellie kept on winning the battle for life. Today, Ellie is a strong, healthy 2-year-old girl sitting with her amazing mother Robin in the gallery." He then pivoted and called on Congress to pass legislation finally banning "the late-term abortion of babies."

One wishes he had said something about eliminating outdated and unworkable government programs. Instead, he proposed even more programs, adding to our $23 trillion (and growing) national debt. He apparently still thinks growth will solve the problem, but not if he and Congress keep spending.

This was more than a State of the Union address. It was a campaign kickoff. According to Gallup, Trump received "a 10 percent approval rating among blacks in 2017, 11 percent in 2018 and 10 percent in December 2019." Emerson Polling and Rasmussen Reports put that number at 34 percent, which, depending on which poll you believe, might suggest the president's appeal is growing in the African American community. Maybe the administration's criminal justice reform legislation and the call for expansion of school choice legislation are responsible for the rise?

Following his acquittal by the Senate on two articles of impeachment, the president clearly has the wind at his back. With issues going his way and with the Democratic Party in disarray (the broken vote-counting app in the Iowa caucuses was an appropriate symbol of their dysfunction) the president is poised for four more years.