Cal Thomas
|
Posted: Jan 09, 2020 12:01 AM
Share   Tweet
The opinions expressed by columnists are their own and do not necessarily represent the views of Townhall.com. 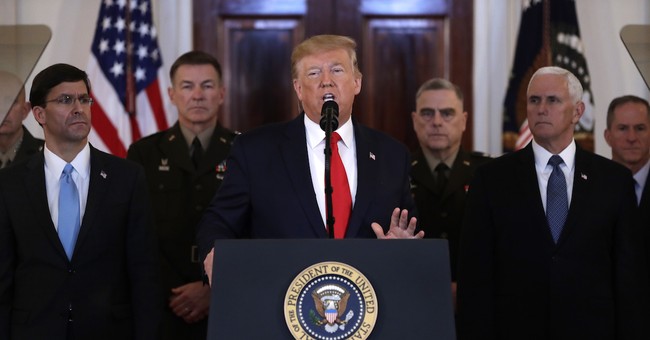 Prior to Iran's missile attacks on U.S. bases inside Iraq, Secretary of Defense Mark Esper said, "We are not seeking war with Iran, but we are prepared to finish one." Esper said the U.S. prefers a "diplomatic" solution to the escalation of tensions in the region.

Yes, that would be ideal, but a diplomatic solution would require Iran to reverse course, no longer fund and practice terrorism, stop developing a nuclear weapon and cease its repeated threats to destroy Israel.

Never at a loss to make political hay out of a serious foreign conflict with American troops in danger, Speaker of the House Nancy Pelosi criticized the president in a mixed message: "We must ensure the safety of our service members, including ending needless provocations from the Administration and demanding that Iran cease its violence. America and the world cannot afford war."

Pelosi said nothing about the endless provocations by Iran, the world's number one sponsor of terrorism.

In an appearance at the White House, President Trump said: "As long as I am President of the United States, Iran will never be allowed to have a nuclear weapon." He called for a greater involvement by NATO in the Middle East without spelling out what that would look like. And he promised more "punishing" economic sanctions on Iran, whose economy is already teetering on the brink.

That the president did not announce or threaten new military operations against Iran was significant and offers Tehran an opportunity to de-escalate the conflict.

I have written this before, but it bears repeating. Iran's theocratic leadership believes war is the path to revealing the "12th Imam," their version of the Christian second coming. The Mullahs of Iran are true believers who it appears are willing, even eager, to die for their cause, or more accurately have others die in their place.

Here is the formula the "no more war" crowd doesn't get or refuses to accept. Iran and its proxies kill U.S. troops, along with Iranian and foreign civilians and we are supposed to take it. If America responds to Iran, as President Trump has done (unlike Obama and Clinton), we are the enemy of peace and guilty of "escalating" the conflict. War is never a one-way street, unless one side pre-emptively surrenders. Victory must be our goal and should be defined.

Perhaps feckless European nations, Saudi Arabia and other countries will see clearly now that we have been at war with these fanatics at least since 1979 when Iranian college students belonging to the Muslim Student Followers of the Imam's Line seized the U.S. embassy in Tehran and held 52 people hostage for 444 days until the inauguration of Ronald Reagan when the hostages were released. Maybe the Iranians feared Reagan would do then what Trump has done now, which is to punch back when attacked.

Yes, Iran must not be allowed to create nuclear weapons. Most in the West and Israel believe that. The question is how to stop them. There are multiple ways, short of armed conflict. There will not be an invasion of Iran, but cyberattacks, computer viruses, targeting missile sites and increased sanctions are all options. So is supporting those inside Iran who hate their government and wish to replace it.

Perhaps Iran's retaliatory attack was about "saving face" for the Iranian regime. Since no Americans were killed, and President Trump has said that is a red line for him, this could be the end of the latest conflict. It will most assuredly not be the end of this war. But no one should be under any illusion that what the U.S. and the West does short of surrender will affect the stated goals of the fanatics, who are in it to win it.

The ultimate question is, are we?