Cal Thomas
|
Posted: Jan 07, 2020 12:01 AM
Share   Tweet
The opinions expressed by columnists are their own and do not necessarily represent the views of Townhall.com. 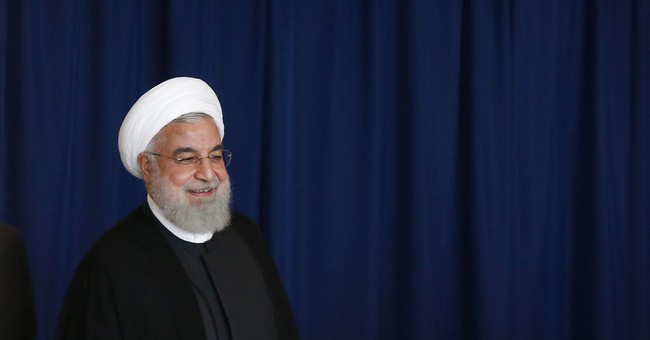 Addressing the British Parliament in 1982, President Ronald Reagan outlined a plan for placing the Soviet Union and Marxism-Leninism on the "ash heap of history." It is an objective President Trump might pursue against the mullahs in Iran, who are subsidizing terrorism in the Middle East and threatening to export it elsewhere.

The latest military and verbal volleys between the United States and Iran started when a branch of the Hezbollah terrorist group (called "militants" by some reporters), attacked the American Embassy in Baghdad. Unlike the 2012 terrorist assaults in Benghazi, Libya, during which U.S. Ambassador Christopher Stevens, Information Officer Sean Smith, and two CIA operatives, Glen Doherty and Tyrone Woods, both former Navy SEALs, were killed, while President Obama and Secretary of State Clinton did little, President Trump sent in the Marines who repelled the terrorists.

The Baghdad incident followed U.S. airstrikes that killed 25 militia members, who the U.S. had claimed were responsible for the death of an American contractor. Following the repulsion of the embassy attackers, new U.S. airstrikes near the Baghdad airport killed Qasem Soleimani, the leader of Iran's elite Quds Force.

This prompted a response from Iranian President Hassan Rouhani, who said Iran and other "free nations in the region" will take revenge on the United States. The only "free nation" in the region is Israel, which Iran has promised to destroy.

In terms of a focused verbal response, it is hard to beat what Sen. Ben Sasse (R-NE) said. "This is very simple: General Soleimani is dead because he was an evil b*stard who murdered Americans. The President made the brave and right call, and Americans should be proud of our service members who got the job done. Tehran is on edge -- the mullahs have already slaughtered at least a thousand innocent Iranians -- and before they lash out further they should know that the U.S. military can bring any and all of these IRGC butchers to their knees."

The policy of the United States (and other truly free nations) -- whether declared or undeclared -- should be to destroy the dictatorial and murderous Iranian regime. The fiction of "moderates" embedded among Iranian leaders is just that. The West has long engaged in self-delusion, believing that somewhere within radical Islam there are flowers of freedom just waiting to bloom if only they are watered and fertilized properly, because doesn't everyone want to be free?

It depends on the definition of "freedom," which means different things to different people.

The U.S. has again demonstrated it has the power to retaliate and kill evil people, but that doesn't solve the problem. The supply of these fanatics seems unlimited. They really believe if they are killed while killing others they will immediately ascend to Heaven where their god will dispense virgins and figs.

Sanctions are helping but sanctions are not enough. An invasion will not work and would be bloody. Iran must not be allowed to develop nuclear weapons it would likely use to threaten Israel and possibly U.S. forces in the region.

President Trump is demonstrating a toughness that was mostly absent in the Obama and Clinton administrations when it came to Iran. Obama, who released $400 million plus $1.3 billion in interest payments in cash the day after U.S. hostages were released by the regime, may have had the legal right to do so under a previous agreement with Tehran, but it looked to many like ransom money and to the Muslim world like weakness.

Tyrants and bullies count on the weakness and indecisiveness of their adversaries. The Soviet Union lost its battle for worldwide domination (though China is seeking to fill that void) because the goal of Reagan was to assign it to history's ash heap. President Trump should make sure Iran's mullahs are added to the pile.