My Sentimental Journey With Doris Day

Cal Thomas
|
Posted: May 16, 2019 12:01 AM
Share   Tweet
The opinions expressed by columnists are their own and do not necessarily represent the views of Townhall.com. 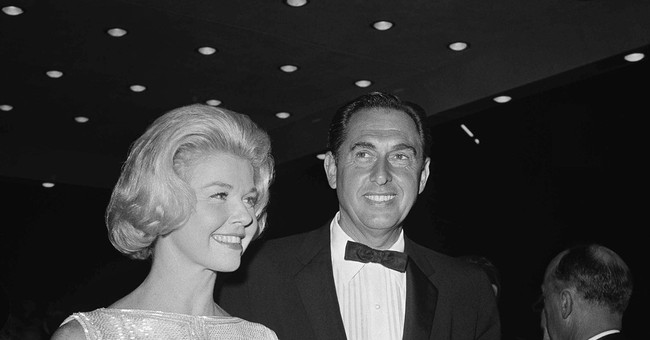 It was Oscar Levant who uttered the famous line: "I knew Doris Day before she was a virgin."

In a way it was a backhanded compliment to a woman who represented in most of her film roles an image of chastity and virtue that was once mostly promoted in American culture, though not always practiced in private lives, including hers.

Day, who died last Monday at age 97, became a friend late in her life.

The circumstance involved radio talk show host Rush Limbaugh and his mother. Limbaugh had once mentioned how few Republicans and conservatives there are in Hollywood. He said Doris Day was one of them and that she and his mother had become friends. I had always loved Day's music and many of her films, especially the few dramatic roles she played, as in "The Man Who Knew Too Much," co-starring Jimmy Stewart, and my personal favorite, "Love Me or Leave Me," the story of singer Ruth Etting, co-starring James Cagney.

She even adopted a "duck tail" hairstyle for her role in "The Pajama Game," which many teenage girls at the time copied in beauty shops across the country. Boys got their duck tail inspiration from other films.

I asked Rush if I could speak to his mother and he gave me her contact information. She called Day, who said she was a fan of mine (who knew?), and would love to meet me. So, my wife and I flew to California and we met at a local restaurant in Carmel and later at her home where she kept many of her dogs in bedrooms others might have used for their children. She regarded animals as her children.

There we were regaled with the kind of stories I love to hear about show business people. After all "there are no people like show people," as Irving Berlin wrote.

The most fascinating story was when Doris said she never listened to playbacks of her songs after she recorded them. But then her son, Terry Melcher, informed her that a German company had re-mastered many of her songs and put them in a beautiful box set. He brought the box to her, along with a CD player and left them. One night after putting her dogs to bed, she went to the refrigerator, poured a glass of white wine, put on one of the CDs "and I danced around the room."

I responded, "I wish I had been there to dance with you."

As obituary writers and she herself noted, many of the virginal roles she played were not the real her. Married four times, including to one husband who ruined her financially (her son managed to restore her fortunes) she was more a symbol of virtue than its best example. But the same could be said of many of us.

In her songs every word is understandable, unlike much of the noise that passes for contemporary popular music today. Her songs promote love, kindness and joy. Even the sadder ones don't seem to sound as sad when she sings them.

One of the great benefits of being part of a profession called journalism is the people one gets to meet. Presidents and other politicians are on my list, but my favorites are the performers, because they help people forget everything else and often lift their spirits to new heights of joy and delight.

Doris Day took me on a "sentimental journey" from which I don't think I shall ever return.