Cal Thomas
|
Posted: Nov 27, 2018 12:01 AM
Share   Tweet
The opinions expressed by columnists are their own and do not necessarily represent the views of Townhall.com. 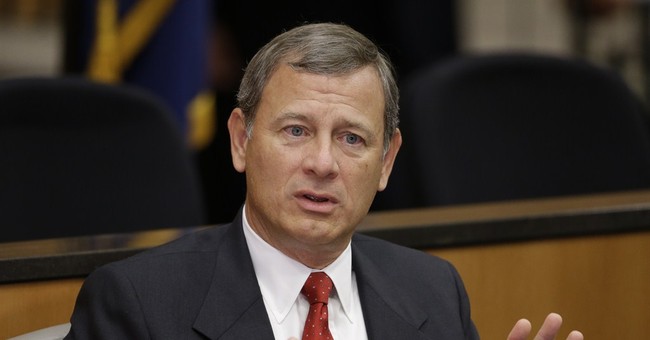 Last week the president criticized the U.S. Court of Appeals for the Ninth Circuit, based in San Francisco, calling it "a lawless disgrace." The New York Times writes, "Mr. Trump's remarks came after a federal trial judge ordered the administration to resume accepting asylum claims from migrants no matter where or how they entered the United States."

The judge issuing the ruling was Jon S. Tigar, of the United States District Court in San Francisco, whom Trump quickly singled out as an "Obama judge." This prompted a rare pushback from Chief Justice John Roberts, who said in a statement, "We do not have Obama judges, or Trump judges, Bush judges or Clinton judges. What we have is an extraordinary group of dedicated judges doing their level best to do equal right to those appearing before them. The independent judiciary is something we should all be thankful for."

The problem, as the president correctly sees it, is that the judiciary in too many cases appears to have become independent of the Constitution, making laws and reading liberal policies into the document that are not there. If all judges thought the same, as Roberts seems to suggest, why are there so many 5-4 rulings by the high court?

Conservatives have long complained that liberal judges advance policies that would never get through Congress. Besides, if there are no Trump, Obama, Bush or Clinton judges, then why the battle over every candidate nominated by a Republican president? Have we already forgotten the recent all-out war mounted by the left against Justice Brett Kavanaugh?

In a Thanksgiving Day tweet, the president claimed, "...the 9th circuit has a horrible reputation. It is overturned more than any circuit in the country, 79 percent, & is used to get an almost guaranteed result...Judges must not legislate security and safety at the border or anywhere else. They know nothing about it and are making our country unsafe. Our great law enforcement professionals must be allowed to do their job! If not there will be only bedlam, chaos, injury and death. We want the Constitution as written."

In fact, the Ninth Circuit's rulings are not the most overturned. According to data compiled by the U.S. Supreme Court blog, that particular distinction goes to the U.S. Court of Appeals for the 6th Circuit, which is in Ohio.

But that last sentence is at the heart of a debate that has been going on at least since the 1960s, and centers on what standard should be used to interpret the Constitution. Does the Constitution speak for itself, or does it say only what judges say it says, as the late Chief Justice Charles Evans Hughes contended a century ago?

The president is on solid footing when he argues to preserve the prerogatives of his office. In 1950, the Supreme Court said, "The exclusion of aliens is a fundamental act of sovereignty ... inherent in the executive power." Congress increased that power in 1952, passing legislation declaring the president "may by proclamation and for such period as he shall deem necessary, suspend the entry of all aliens and any class of aliens as immigrants or non-immigrants whenever he thinks it would be detrimental to the interests of the United States."

President Truman vetoed the measure, but Congress overrode him. It is the standard that ought to be employed today.

This debate is more than a legal squabble between politicians and judges with differing points of view. It is about the character and makeup of our country and whether we who are now living will bequeath to our descendants something resembling what our predecessors passed to us.

Most immigrants in the past wanted to learn English, embrace the culture and become fully American, not hyphenated Americans with agendas and policies brought from their homelands.

The back and forth between President Trump and Chief Justice Roberts has brought the real issue to the forefront again where it is likely to remain through the next election and, depending on the outcome, for elections after that until it is resolved either to the benefit or detriment of the nation.