How to Keep Aretha's Music Playing

Cal Thomas
|
Posted: Aug 21, 2018 12:01 AM
Share   Tweet
The opinions expressed by columnists are their own and do not necessarily represent the views of Townhall.com. 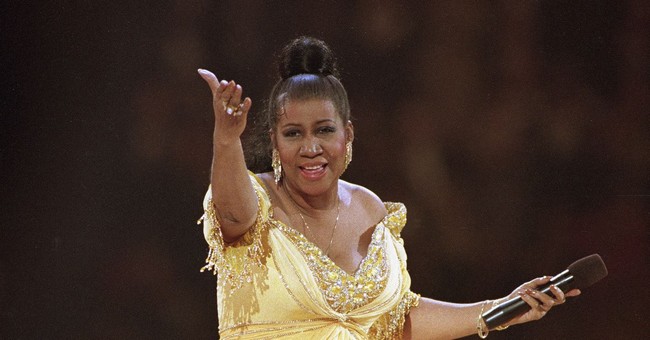 What does a white boy from the white suburbs of Washington, D.C., have to say about the passing of soul singer Aretha Franklin?

At 16, I was a DJ on a local radio station, playing the rock 'n' roll and doo-wop recordings of the day. Many of the artists were black. Richard Penniman (aka "Little Richard") tells a funny story about white kids back then. In "Hail, Hail, Rock 'n' Roll," the 1987 documentary about Chuck Berry, Little Richard noted that white kids would have Pat Boone's albums on the top of their dressers to fool their parents, but the records of black artists hidden inside the dresser drawers.

The music of black artists like Aretha Franklin was soulful, and some of it was incredibly sexy, like Fats Domino's "I Found My Thrill on Blueberry Hill." Black artists, especially gospel singers, influenced Elvis Presley and other white singers of the day, who mimicked their style and artistry, sanitized it, and then presented it to white audiences, many of whom would not have accepted music sung by blacks.

Aretha Franklin began singing in church, and her music, her soaring voice, which touched every part of one's anatomy from head, to heart, to soul, soon became a vital part of the civil rights songbook.

It was my privilege to see many of these performers in person, including Ella Fitzgerald, Count Basie and Duke Ellington and their orchestras, Ray Charles, Cab Calloway in the all-black cast of "Hello, Dolly" starring Pearl Bailey, and many others on TV and in film, such as Nat "King" Cole, Sammy Davis Jr., Diana Ross and The Supremes, The Platters and the doo-wop singers of the '50s.

These performers and their stories of racism and injustice helped form my positive views of the civil rights movement, along with my time at NBC News in Washington where I listened to stories brought back by reporters who had covered demonstrations in the South, meant to be peaceful, but which quickly devolved into violent confrontation, and even acts of murder perpetrated by racists, a word that today is too lightly and too often overused.

Little Richard tells a story about how he and other black artists would writes songs only to see the name of a white label owner or producer credited with their authorship, resulting in royalties going to them, leaving black artists with little to nothing.

Aretha Franklin suffered similar inequities. Take her most famous song, "Respect." It was written by the late Otis Redding, but as The New York Times reported, "...every time the song is played on the radio, Mr. Redding's estate ... has been paid. Ms. Franklin never was."

I count two of Franklin's performances among my favorites. One is her role as a waitress in the cult hit "The Blues Brothers," starring Dan Aykroyd and John Belushi, which also included knockout performances by Ray Charles and Cab Calloway. Franklin sings "Think" in a scene so fantastically choreographed that it would have been a showstopper on the Broadway stage.

My other favorite performance is a duet with Tony Bennett titled "How Do You Keep the Music Playing?" If you haven't seen it, go to YouTube. I tear up every time I watch.

"How do you keep the music playing?

How do you make it last?

How do you keep the song from fading

How will we keep Aretha Franklin's music from fading? By playing it over and over again and introducing future generations to it, as we might any other classic. Hers is a story in song and a life that inspired and influenced millions.

That's not a bad epitaph for anyone.