Cal Thomas
|
Posted: Jul 31, 2018 12:01 AM
Share   Tweet
The opinions expressed by columnists are their own and do not necessarily represent the views of Townhall.com. 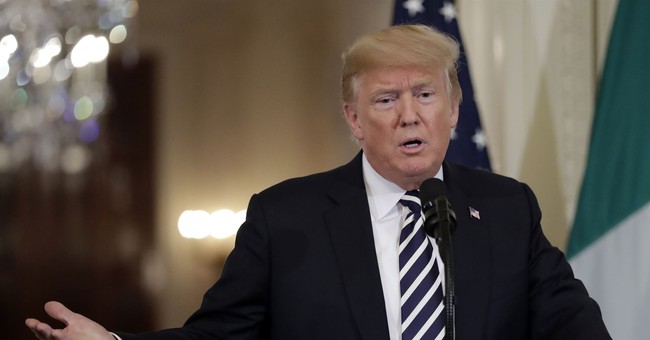 Like a baseball team that is way behind going into the fifth inning, Democrats (and socialists) are hoping for the political equivalent of a rainout, so that the game President Trump is winning will be canceled, allowing them time to regroup.

The president's opponents are going to need more than that figurative cancellation, however; they're going to need a real plan of action. Democrats, whose policies of tax, spend and regulate, are being reversed, seem to have nothing to offer except failed policies that have slowed growth and discouraged business expansion. Their "policy" is a vain hope that "scandal" and Russian "collusion" will lead to Trump's downfall. So far that strategy isn't working. His base continues to support him.

During the 2016 campaign when candidate Trump pledged a growth in the Gross Domestic Product (GDP) of 4 percent, "experts" claimed it was impossible. President Obama said we would have to accept much smaller growth because the days of rapid economic expansion were over.

The left is coming up with all sorts of excuses, including the export of large amounts of soybeans, to explain 4.1 percent GDP growth as a one-off. Some of the same "experts" who claimed such growth was impossible now say it is unsustainable. Let's recall that other 'experts" said there was no way Donald Trump could beat Hillary Clinton. And yet the media continue to return to these people, as they might a soothsayer, hoping they will get it right next time.

Within days of his inauguration, the Dow Jones industrial average climbed above the 20,000 mark for the first time. As of last Friday the Dow stood at 25,451, a 5,000-point rise. Retirees with their 401k accounts and other investments must be happy with those numbers. Low unemployment figures for African Americans and Hispanics (President Trump claims they are the lowest in history "because of my policies," even though black unemployment had been on a years-long downward trend when he assumed office) nonetheless have fueled a hiring boom.

Tax cuts and tax reform have put more money in the pockets of some Americans to spend (or save) on goods and services, producing more of them and leading to the hiring of more people, who will pay more taxes. The Treasury last quarter again took in record amounts of revenue, though Congress spends it faster than it comes in.

It appears the president may have won a significant battle in the trade war with a promise last week from European Commission chief Jean-Claude Juncker to negotiate zero tariffs on U.S. steel and aluminum; something else the "experts" said was impossible. The president is on the way to winning this battle because of his assertion that the U.S. has been treated unfairly by other countries that slap tariffs and taxes on American goods while we import their products with few or no penalties.

Would Mr. Obama like salt or salsa on the words he should eat? President Trump is proving that the past can be prologue.