The UK's Consequential Embrace of Secularism

Cal Thomas
|
Posted: Dec 28, 2017 12:01 AM
Share   Tweet
The opinions expressed by columnists are their own and do not necessarily represent the views of Townhall.com. 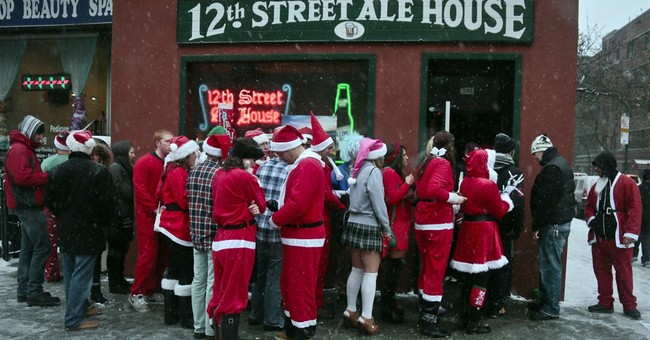 ANGLESEY, Wales -- The UK Daily Mail has again published a story about a subject that has become a recurring theme this time of year. No, not Christmas, but rather drunkenness, though the holiday is used as its primary excuse. Pictures accompanying the story show young people collapsing in gutters and vomiting on the sidewalks. It is not a pretty sight.

More than 100 years after the 1904 Welsh revival and more than 60 years after American evangelist Billy Graham preached at a London Crusade, which lasted 12 weeks, and at its height brought 120,000 people to Wembley Stadium in the rain, registering thousands of converts, the United Kingdom is a spiritual shadow of its former self.

The BBC recently announced its intension to expand religion coverage on the theory that more information about faith might stem growing anti-Semitism and create understanding of various beliefs. Currently only one religion program, "Songs of Praise" is regularly shown on BBC.

The announcement brought a stinging rebuke from London Times columnist David Aaronovitch: "Given that for the first time since the Black Death a majority of Britons are not actually religious, this new emphasis seems perverse."

A considerable amount of mocking follows: "Maybe there'll be a sitcom called 'The End is Nigh,' in which a family of Jehovah's Witnesses moves next door to a family of Seventh Day Adventists and evangelical mayhem ensues. Or the corporation will buy the rights to 'Saudi Arabian Big Brother,' where the all-male housemates compete to see which of them is the most pious. That one really exists, by the way."

Aaronovitch might examine the difference between the cultural influences of past revivals and the British approach to faith today, which has moved from indifference to open hostility in many cases and produced faithless acts, like public drunkenness.

During the Welsh revival and for at least two decades after, drunkenness was cut in half. As the late minister and chronicler of Christian revivals, J. Edwin Orr has written, "The movement went like a tidal wave over Wales, in five months there being a hundred thousand people converted throughout the country."

Here is where secularists must be challenged if they think faith has no role in modern life. Again, Orr paints the picture: "The social impact was astounding. For example, judges were presented with white gloves, not a case to try; no robberies, no burglaries, no rapes, no murders, and no embezzlements, nothing. District councils held emergency meetings to discuss what to do with the police now that they were unemployed. In one place the sergeant of police was sent for and asked, 'What do you do with your time?' He replied, 'Before the revival, we had two main jobs, to prevent crime and to control crowds, as at football games. Since the revival started there is practically no crime. So we just go with the crowds.'

"A councilor asked, 'What does that mean?' The sergeant replied, 'You know where the crowds are. They are packing out the churches.' 'But how does that affect the police?' He was told, 'We have seventeen police in our station, but we have three quartets, and if any church wants a quartet to sing, they simply call the police station'."

It turns out faith -- at least faith that does not embrace violence to achieve its goals -- promotes positive cultural values better than politicians do. As in America, politicians here are being outed and ousted over claims of sexual harassment and consumption of pornography on their government computers. Perhaps acknowledgement of a Higher Authority in their lives might have prevented them from embracing baser instincts.

If the BBC is rediscovering faith, that might possibly lead to a renewed interest in the subject among the public and who knows, another revival? God knows the UK (and America) could use one.

Share this on Facebook
Tweet
Psaki Flared Up At a Reporter’s Question on Abortion Ahead of Biden’s Visit with the Pope
Madeline Leesman
Cradle to Grave: Biden Introduces America to the 'Life of Linda'
Katie Pavlich
Cori Bush Says Rittenhouse Judge's Ruling Shows 'How Deeply Rooted White Supremacy Is In Our Society'
Julio Rosas
Biden Announces a 'Deal' on a Bill That Doesn't Exist Yet
Katie Pavlich
Tom Cotton Tells AG Garland What So Many Others Are Thinking: 'Thank God You Are Not on the Supreme Court'
Rebecca Downs
Former ATF Nominee David Chipman Blames This Reason for Why His Nomination Failed
Julio Rosas

Dana Loesch Gets Ahead of the Liberal Media's Predicable Move to Protect Alec Baldwin Post-Accidental Shooting
Townhall
Apparently Ayanna Pressley's DC office has been sending constituents to voicemail for the past year and a half and doesn't know how to stop
Twitchy
Biden's New Hope to Solve the Supply Chain Crisis Is so Bad, It Defies Belief
Redstate
Aging Hippies Ruin a Wedding Officiated by Sinema Because That's What Commies Do
PJ Media