Cal Thomas
|
Posted: Oct 14, 2017 12:01 AM
Share   Tweet
The opinions expressed by columnists are their own and do not necessarily represent the views of Townhall.com. 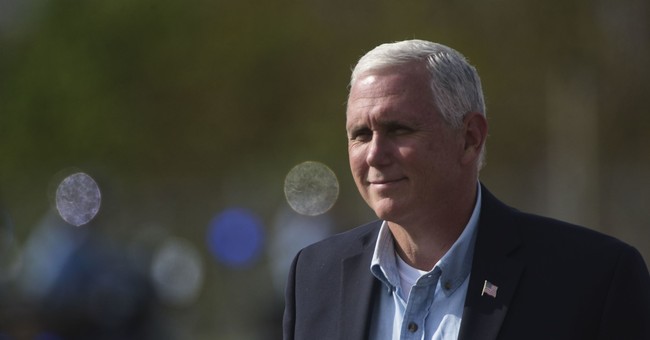 If a metaphor could be used for this White House, it might be a two-sided coin with President Trump the head and Vice President Mike Pence the tail.

The president tends toward the bombastic to get people's attention and make his points, while his vice president is calm and measured in his response to questions, sometimes resembling a contemplative monk. In many ways, they complement each other.

During an interview Thursday, the vice president said tax reform is now the administration's top domestic priority and that "we have the best opportunity between now and the end of the year to do that." He believes it will get done.

Why the optimism? Because, he says, "there is broad-based and more than a little bipartisan support for tax relief to get this economy growing again." Pence thinks the "failure to repeal Obamacare in 2017 has created (an) even greater sense of urgency. There's a great sense of anticipation among the American public. I think Members of Congress are very aware of that."

What about Obamacare and the failure of Republicans to repeal and replace it, leading to a number of executive orders (issued Thursday) to address what the president feels is the harm caused by that law?

Pence predicts the Senate will go along with the House next spring when a new budget bill comes up for consideration. "The word we got from Senators (Lisa) Murkowski (R-AK) and (John) McCain (R-AZ) was very favorable toward the Graham-Cassidy bill, which would have repealed the individual mandate, repealed the business mandate and block grant(ed) resources back to the states. Their attitude on the substance was very favorable, but both of them wanted to give the Senate time to go through the committee process, the hearing process, for full floor consideration and amendments."

What about Iran and the decertification of the nuclear deal made during the Obama administration? Pence said the president considers the deal a "disaster agreement for the United States." From the White House on Friday, the president announced he was decertifying the deal, imposing new sanctions and asking our allies and Congress to address the deal's "serious flaws."

North Korea? Pence notes how "truly remarkable" he believes it is that there is a "global consensus around a commitment to a nuclear-free Korean peninsula. ... What we've seen from the Kim regime in recent months is a series of provocations and a nuclear missile test I believe has created an environment that has made it possible for us to forge not only stronger relations with our allies in the region, but given President Trump's strong relationship with President Xi of China, we've seen China take action regarding North Korea that they've never taken before (including) cutting off access to financial institutions in China."

I ask if a nuclear-free Korean peninsula and getting Kim to stop production of nuclear weapons can be achieved without war and get the standard answer the president has given: "We remain hopeful we'll be able to achieve it by economic and diplomatic means, but all options are on the table."

As might be expected of a loyal vice president, Pence suggests the president is not getting the credit he thinks he deserves for undoing some of the policies of previous administrations, attempting to loosen the grip of ISIS in Iraq and for his businessman's approach to government, emphasizing more private-sector jobs and relaxing or eliminating unnecessary regulations that stifle economic growth.

Would he care to comment on the Harvey Weinstein story everyone is talking about?

He smiles and demurs, possibly adopting the philosophy that when your liberal political enemies are destroying themselves, why get in the way by changing the subject?

On the way out of the White House Mess where we had lunch, Pence pauses to admire a model of an old ship. To employ a nautical phrase, Mike Pence is a calming influence on sometimes stormy political seas. He may be President Trump's greatest political and personal asset.