Cal Thomas
|
Posted: Dec 20, 2016 12:01 AM
Share   Tweet
The opinions expressed by columnists are their own and do not necessarily represent the views of Townhall.com. 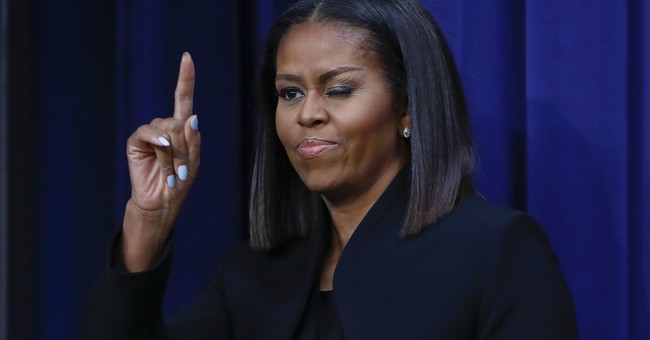 Former Sen. Alan Simpson (R-WY) once said that, "Those who travel the high road of humility will not be troubled by heavy traffic."

That descriptive and funny line came to mind after I heard what first lady Michelle Obama told Oprah Winfrey last week in a TV interview. Because of Donald Trump's election, she told the former talk show host, "We are feeling what not having hope feels like."

She couldn't prove that by the polls. A recent Quinnipiac University poll found that 59 percent of voters are "optimistic about the next four years with Donald Trump as president." Sixty-six percent of respondents said they believed he would create jobs, 52 percent said they believe Trump's policies will help the economy, 53 percent expressed confidence he will take the country in the right direction, and 49 percent think Trump will be either a "great" president or a "good" president.

Michelle Obama's hubris that only her husband could provide hope, despite the unpopularity of his policies (his personal popularity remains high), may be why St. Paul cautioned: "Do not think more highly of yourself than you ought." (Romans 12:3). Pride is the first sin, which leads to all others.

Anyone who puts faith in a politician to make his or her life better is worshipping a false god. Politicians can make your life worse by overtaxing your income, overregulating your business and conducting foreign policy in ways that put America's security at risk, but the qualities that improve any life -- a good education, strong work ethic, self-control, taking personal responsibility for one's actions, obeying the law, developing good character -- these are virtues over which government has little influence.

Politicians promote faith in themselves because it helps their careers and feeds their egos. When was the last time you heard a politician say only you can make your life better by the choices you make? Have you ever heard a politician say, "We are clearing the field of liberty as much as we can so that you have the best opportunity to succeed at whatever you believe your gifts qualify you for"?

If politicians started talking like that people might have more faith in themselves and politicians would see their influence and power decline significantly.

People hope for many things. Some people hope to win the lottery; others choose to hope in someone, or something, that can actually deliver. Hoping to win the lottery, or hoping a politician can improve your life, is a vain hope that can lead to disappointment, even cynicism.

A friend of mine once observed that humility is so light a grace that once you think you have attained it, you've lost it. Humility is the polar opposite of what Michelle Obama displayed to Oprah and what the president has mirrored during his eight years in office. Throughout his presidency, you might have thought the pronoun "I" was his first initial for all the times he referred to himself.

The Obamas could have offered real hope, especially in the hearts of African-American children, by leading the poor among them out of failing inner-city schools and giving their parents a choice of where to send them for a better education, which would have led to a better life. They rightly sent their daughters to elite private schools, rather than bad D.C. public schools, but denied that choice to those less affluent, thus perpetuating a spirit of hopelessness in those voters who had hoped for something beyond a "let's move" exercise program and a vegetable garden on the White House lawn.