Cal Thomas
|
Posted: Jul 28, 2016 12:00 AM
Share   Tweet
The opinions expressed by columnists are their own and do not necessarily represent the views of Townhall.com. 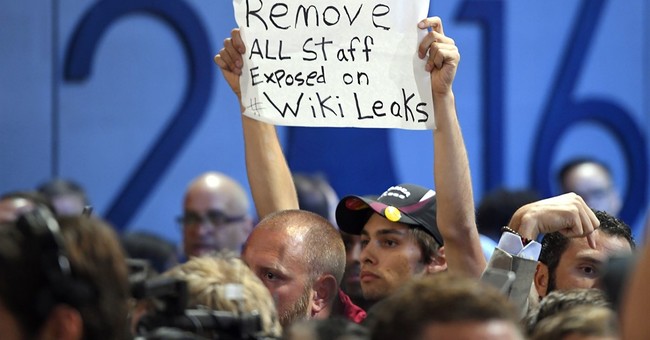 Thanks to WikiLeaks, which has released nearly 20,000 emails hacked from the Democratic National Committee -- with promises of more to come -- we have proof the party that styles itself as inclusive, diverse and tolerant isn't.

Among the delectable tidbits on which Republicans are feasting are these: one male DNC staffer wrote another male staffer saying "I love you" and added "no homo." Another DNC email referred to Latino voters as "taco bowl outreach." Now ousted DNC Chair Debbie Wasserman Schultz is exposed as a liar for falsely claiming she was not working behind the scenes to defeat Sen. Bernie Sanders and secure the Democratic nomination for Hillary Clinton.

DNC chief financial officer Brad Marshall violated what is for Democrats a sacred doctrine of church-state separation when he wrote in an email to DNC CEO Amy Dacey about Sanders' religious beliefs: "Ask his belief. Does he believe in a God. He had skated on saying he has a Jewish heritage. I think I read he is an atheist. This could make several points difference with my peeps. My Southern Baptist peeps would draw a big difference between a Jew and an atheist."

Disclosure of this email particularly outraged the Center for Inquiry, a secular group, which issued a statement that reads in part: "We found it appalling that anyone within the Democratic National Committee would casually suggest attacking a candidate for their alleged atheism. Entertaining such a cynical and bigoted line of attack violates any number of basic American principles: It presumes a religious test for holding office, something expressly prohibited in the Constitution."

Of further interest is evidence of collusion between the DNC and the media. Conservatives already believe most journalists favor all things Democrat, and this should help seal the deal in their minds. According to Breitbart, Ken Vogel, a reporter for Politico, sent a copy of a story he wrote to the DNC's deputy communications director before showing it to his editor. "Per agreement," said the subject line. Should reporters be making agreements with a political party?

Numerous other examples of the cozy relationship between reporters and the DNC -- along with examples of media bias -- can be found at newsbusters.org. Expect the promised additional emails to add more to the public's dislike of journalists.

Thanks to WikiLeaks, the unity Democrats had hoped to present to the country at their convention makes last week's Republican convention look like something out of "Robert's Rules of Order." Supporters of Bernie Sanders are right to be outraged. The emails showing the DNC maneuvered to guarantee Hillary Clinton's nomination prove his point. The system IS rigged.

Democrat operatives are spinning webs of conspiracy theories, hoping to divert public attention and perception. Hillary Clinton's campaign manager, Robby Mook, is saying Russia hacked DNC emails to help Donald Trump win the election. It makes the conspiracy theory about Sen. Ted Cruz's father helping JFK assassin Lee Harvey Oswald look tame by comparison. Democrats are desperate to change the narrative from the contents of the emails to who hacked and released them.

As in so many other instances, the DNC emails make the Democrats and their numerous media allies look like cynical manipulators of public opinion. It is the modern equivalent of The Pentagon Papers, but unlike those documents, which helped topple a president, the major media can be relied on to do all they can to keep from reporting the most damaging of the emails or make excuses for those who sent them.

Perhaps "reporters" will even submit their stories in advance for approval by the DNC. Republicans and Donald Trump have been handed a gift. They should exploit it right up until the election.