Rebuilding Gaza for the Next Attack 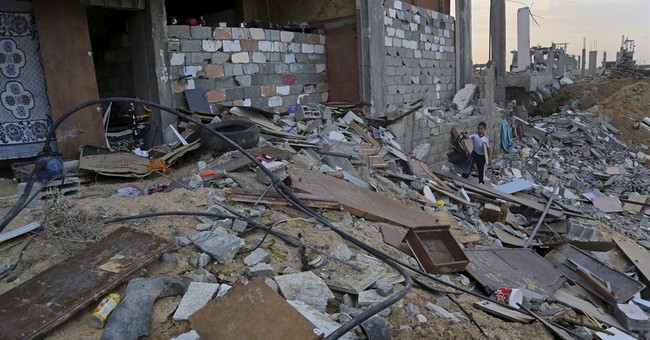 Trending
After World War II, the Marshall Plan helped rebuild a devastated Europe. The key word in that sentence is "after."

Last weekend at a conference of donor nations held in Cairo, Egypt, to discuss rebuilding Gaza, following the latest exchange of rockets between Hamas and Israel, Secretary of State John Kerry pledged an additional $212 million in U.S. aid for the project, nearly doubling the total U.S. commitment (so far). The Palestinian Authority claims rebuilding could cost $4 billion.

The aid is promised before the terrorist war against Israel is over and without a promise by Hamas or the Palestinian Authority that there won't be future attacks against the Jewish state. In fact, if history is a guide -- and it is, though the State Department pays little attention to history -- after the rebuilding of Gaza, there is likely to be more war made against Israel. Previous aid, which was supposed to go for "infrastructure" and other nonmilitary purposes, was reportedly used instead to build tunnels stretching into Israel that Hamas planned to use for suicide bombers and other attacks. Only Israel's cross-border assault and targeting of the tunnels prevented the potential of mass Israeli casualties.

In announcing the U.S. aid, Kerry said "with deep conviction" that "the United States remains fully and totally committed to returning to negotiations not just for the sake of it, but because the goal of this conference and the future of the region demand it."

CARTOONS | AF Branco
View Cartoon
Hamas, which controls Gaza, isn't demanding negotiations, except perhaps for tactical reasons. Hamas has a charter that is worth reading if anyone remains in doubt about its ultimate goal. Kerry should read it and believe it before making such meaningless and ridiculous statements as he made in Cairo.

Article 11 reads: "The Islamic Resistance Movement believes that the land of Palestine has been an Islamic Waqf throughout the generations and until the Day of Resurrection, no one can renounce it or part of it, or abandon it or part of it."

Does anyone see any daylight for negotiations in these statements, or in the rest of the charter?

To underscore their objectives, Hamas leader Khalil al-Haya insisted that Hamas "...would not abandon its weapons. We say to those who brought the Jews (to Israel) from all over the world, we are now confident and believe more than ever in the implementation of the promise of Allah -- that we will not keep you (Jews) in our country." Al-Haya said the "option available to you is to leave the country for its native residents (Palestinian Arabs)."

Al-Haya also said the Cairo talks, hosted by Egypt and Norway, gives political legitimacy to Hamas and proves that war works. Add these statements to a long list about eradicating Jews from the entire region as a direct mandate from Allah and anyone not in complete denial can readily see that negotiations produce nothing, except a weakened Israel and an emboldened Hamas and its terrorist brothers in ISIS, al-Qaida and other groups with different names but the same objective.

Meanwhile, American tax dollars are going to underwrite the demise of Israel and ultimately America. This is suicide by diplomacy.