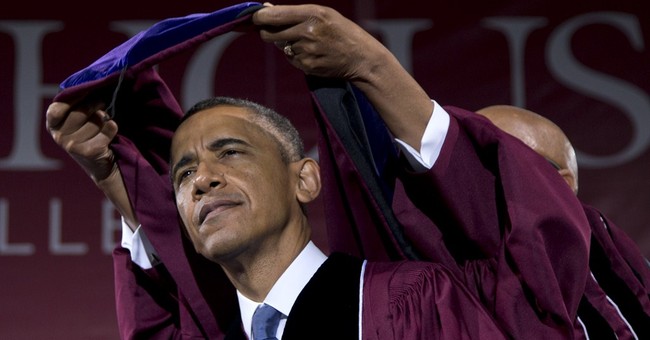 President Obama gave two commencement addresses in one to graduates of Morehouse College in Atlanta, Ga., last weekend. It would be easy for this conservative to critique the political and social elements of his speech. Instead, I choose to focus on the inspirational part.

The president struck the right note at the historically all-male college. African-American men in America need more role models and encouragement to counter the reality, reinforced by much of the media, of too much failure, crime, imprisonment, out-of-wedlock births, a disproportionate abortion rate and other social maladies affecting many in the black community.

The president underscored values any conservative could embrace when he spoke of the college's objective of producing "good men, strong men, upright men" who will "better themselves so they could help others do the same." He added, "In troubled neighborhoods all across this country -- many of them heavily African American -- too few of our citizens have role models to guide them." They do, but too often they are the wrong role models.

Only an African-American man could say what the president said to these young African-American men. In this, he repeated what comedian Bill Cosby has been saying for years about personal responsibility and accountability, while taking heat from some in the black community. The president challenged the graduates to think beyond what their degree could do for them: "...it betrays a poverty of ambition if all you think about is what goods you can buy instead of what good you can do."

Given the size of government and especially welfare programs, the president's statement "nobody is going to give you anything that you have not earned" rings a little hollow, but the ideal he stressed is worthy of praise.

The president spoke of previous generations who overcame hardships worse than theirs: "And if they overcame them, you can overcome them, too."

In the most poignant moment in the speech, the president said he wished he "had had a father who was not only present, but involved." In too many African-American homes, there is neither. He said because he didn't know his father he has tried to be a good husband and father to his wife and daughters. "I want to break that cycle where a father is not at home -- where a father is not helping to raise that son or daughter. I want to be a better father, a better husband, a better man." As a husband and father he is an excellent role model.

This is the message that needs to be delivered not only in the African-American community, but in all communities. Inspiration, followed by motivation, followed by perspiration can improve any life, while entitlement, envy and greed can only diminish it.

The president asked -- no, he commanded -- the Morehouse graduates to "be a good role model, set a good example for that young brother coming up. If you know somebody who's not on point, go back and bring that brother along -- those who've been left behind, who haven't had the same opportunities we have. ... You've got to be engaged on the barbershops, on the basketball court, at church, spend time and energy to give people opportunities and a chance. Pull them up, expose them, support their dreams. Don't put them down."

Beyond the rhetoric, the president acts as if these ideals can best be advanced by government, but even he seemed to acknowledge there is something more powerful than what happens in Washington. It is what happens inside an individual.

The values the president stressed are, or once were considered to be, American values. They are needed most, not only where people live in poverty, but among those who suffer from a poverty of spirit.