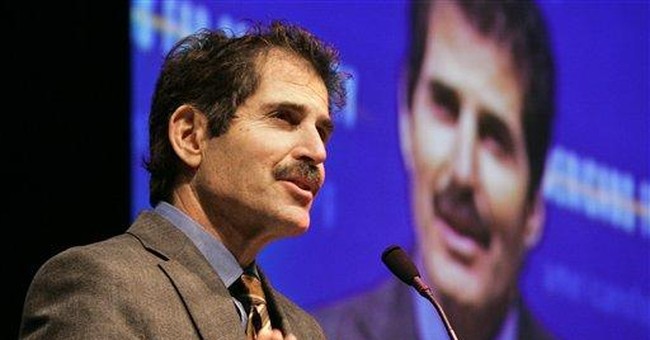 In order to get the correct answer to anything, one must ask the right question. That is what former ABC News and current Fox News TV host John Stossel does on his weekly program. If ever there was "must see-TV," this is it.

Stossel's show on Saturday, June 30 was a classic. It was called "Government, Incorporated" and focused on what private industry can do less expensively and more efficiently than government. After watching it, I wondered why this isn't happening. Why does inefficient, costly and unresponsive government continue to grow while the people and companies that could do the work much better are regulated and taxed to death?

In part it's because politicians speak only in poll-tested sound bites and rarely focus on what works. It isn't as if we don't have a history that can teach us. We know what works, but politicians too often prefer the issue to the solution. That's where Stossel comes in.

At the top of the program Stossel established the underlying foundation of his libertarian philosophy when it comes to government vs. private industry: "...even though the private sector is more efficient, politicians and bureaucrats usually won't let go. They want their tentacles on everything. And the public is usually happy to go along, because we're imprinted to believe the specialists in Washington and state capitals know better. They're from the government. They're here to help. And they're so smart."

One of his guests was Indiana Governor Mitch Daniels. Forget for a moment that Daniels is a Republican. Focus on his accomplishments. "You were $78 million in debt," Stossel said during the program. "Now you have a $1.5 billion surplus." In a controversial decision, Indiana leaders leased a 157-mile toll road to foreign investors. "In exchange," writes Ryan Holeywell of Governing.com, "for a $3.8 billion, lump-sum payment, the investors would get to keep toll road revenue for 75 years ... a windfall for Indiana, with little downside to taxpayers." Next year, Daniels announced recently, his state's surplus will be at least $2 billion. Taxpayers can expect a credit on their 2013 taxes.

Daniels said he invokes what he calls "the Yellow Pages test. If it's in there, then conceivably government shouldn't be doing it itself."

And the result? "The result," said Daniels, "is we're repairing bridges, building roads. We're the only state with a building boom in infrastructure and it didn't cost the taxpayers a nickel."

Re-read that last sentence and then ask yourself why the federal government still sees itself as the primary builder of roads and bridges when it costs more and delivers less. This is a real solution to a nagging problem. Why isn't it more widely embraced? Refer to Stossel's previous answer about government: "They want their tentacles on everything." They're about power. The rest of the country wants results, which they must have in order for their businesses to survive and prosper.

Amtrak was another subject addressed on the program. For 40 years, the rail service has been subsidized by government, but it still loses money, lots of it. The guest was Randal O'Toole who specializes in transportation for the CATO Institute. O'Toole noted that when government started subsidizing Amtrak rail fares were lower than airfares. Now it's the reverse. Some routes, like New Orleans to Los Angeles, lose money, but because politicians want trains running through their states and districts, the money keeps flowing in from Washington.

Contrast this with freight trains, O'Toole says, which once were regulated by the government and are now competitive in the private market. Costs, he says, have gone down for freight.

If results and not political outcomes or rehearsed sound bites become the primary objective in our political discourse, it's difficult to refute the arguments coming from Stossel's show. Instead of focusing on the familiar talking points from politicians, John Stossel's program repeatedly demonstrates that the way to a healthier economy and a stronger government is through the private sector, not government. It doesn't require a surgical procedure to remove that "imprint" that government can do it better; just a different way of thinking.