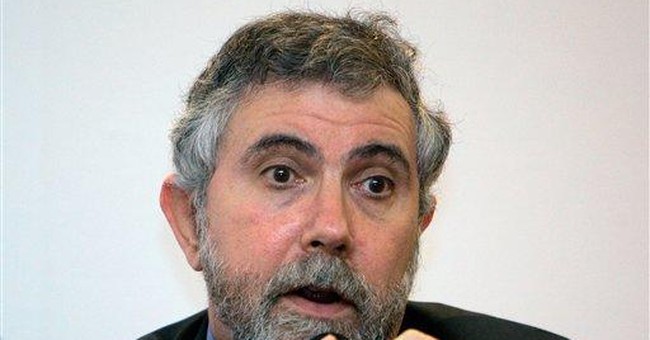 President Obama may have experienced his Walter Cronkite moment over the economy.

Responding to Cronkite's reporting from Vietnam four decades ago that the only way to end the war was by negotiating with the North Vietnamese, President Lyndon Johnson was reported (though never confirmed) to have said, "If I've lost Cronkite, I've lost Middle America."

Now President Obama appears to have "lost" New York Times liberal economic columnist Paul Krugman. Krugman, who enthusiastically supported the president's redistributionist and stimulus plans, has bowed to the reality that they are not working. In a recent column titled "This is Not a Recovery," Krugman took issue with the president and Vice President Joe Biden that we have experienced a summer of economic recovery. "Unfortunately, that's not true," he wrote. "This isn't a recovery, in any sense that matters. And policymakers should be doing everything they can to change that fact."

Krugman asked an essential question: "Why are people who know better sugarcoating economic reality? The answer, I'm sorry to say, is that it's all about evading responsibility."

It is that, and more. The administration is so locked into its left-wing, "tax, borrow and spend" ideology that it has become like someone trapped in a cult: unable to escape and endlessly repeating the same mantra.

In a speech last week to central bankers and economists in Jackson Hole, Wyo., Federal Reserve Chairman Ben Bernanke acknowledged the economy is fragile, especially in light of the government's latest report, which showed the weakest quarterly growth in a year. He added that high unemployment poses a serious threat. Still, Bernanke tried to sound optimistic by forecasting some pickup in growth in 2011 and beyond.

Optimism not based on reality is false hope based on wishful thinking. One might as well ask a high-performance engine to run at peak level after several of its cylinders have been disabled. It is impossible, no matter how shiny the paint job.

An economy burdened down with debt because of too much government spending, a health care law that will add new and unknown burdens, expiring tax cuts that will take more money from the private sector for government to waste and abuse, and a stock market unsure and thus unable to fuel the economic engine to propel us out of this recession, is not a "summer of recovery," but a winter of discontent.

The solution is not a "Star Trek" approach in which we must go where no one has gone before. We know what works and what must be done. Social Security and Medicare must be reformed; government programs that have failed, or are obsolete, should be scrapped; military spending designed to enhance re-election prospects for some members of Congress, while doing nothing to improve the military, must be ended, and people should be asked to return to the attitude of previous generations that all of us, including government, must live within our means.

Writing in U.S. News & World Report, publisher Mort Zuckerman takes the Krugman view a step further by calling the administration he once supported "The Most Fiscally Irresponsible Government in U.S. History."

Zuckerman writes: "People see the stimulus, fashioned and passed by Congress in such a hurry, as a metaphor for wasted money. They are highly critical about the lack of discipline among our political leaders. The question that naturally arises is how to forestall a long-term economic decline."

The answer is for the Republicans, so eager and so likely to regain power in the House and possibly the Senate in the coming election, to expose the administration's sugarcoating of reality and get out the bad-tasting medicine. The good news is that by swallowing fiscal responsibility, we will all be better off in the end. But can Republicans withstand and prevail over the Democratic demagoguery that will predictably be heaped on them? They'd better, or they don't deserve to lead.

As Walter Cronkite used to say, "That's the way it is."