What Would Newt Do? 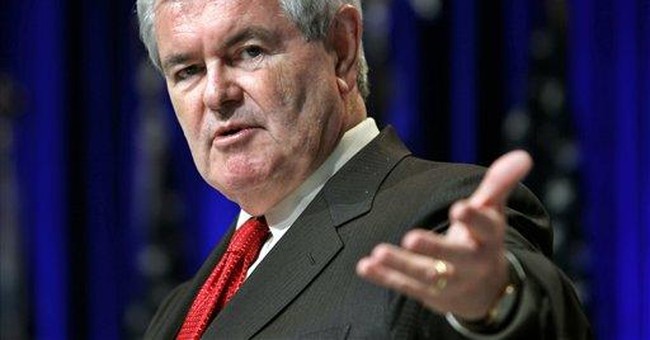 Sitting in his spacious Washington, D.C., office on K Street, the leader of the last Republican revolution, former Speaker of the House Newt Gingrich, ponders the future and likes what he sees. The intensity and commitment by the tea partiers to "throw the bums" out, seems to him as strong as the 1994 revolution that swept Democrats from power and gave Republicans an opportunity Gingrich readily admits they squandered.

"People are now much madder and sicker at the system than they were in 1994," he says. That doesn't mean they hate everything about government. It is the process they hate most. "People actually want an open, bipartisan, transparent process. So you can't say, 'OK, I'll pass these 10 things' (he's thinking of his Contract With America). You've got to come in and say, 'We will work together in the open in a way that is transparent before the whole country to achieve these 10 things.' That's a big difference."

Gingrich thinks one of the 10 things should be repeal of the new health care law: "Republicans should promise that a Republican president and a Republican Congress in February 2013 will repeal and replace Obamacare. That's pretty straightforward and it's doable." He says the more that is learned about the law, "the more it kills jobs, the more it puts us in debt, the more it cripples us with bureaucracy -- this will become a more and more popular position."

And if Republicans are wrong? "The Democrats will have won their great gamble to create a socialist country."

Gingrich describes the Obama administration as a "secular-socialist machine." He says though the country is largely center-right, "it is a tribute to the power and capability of the Democratic Party and the incompetence of the Republican Party -- it's a dual effort -- that you end up with 70 percent of the country being misgoverned by a militant minority."

As the country shifts demographically from a white majority, to majority minority, I ask why the GOP has done so poorly among minorities, especially African-Americans. Gingrich responds: "In part there are very few conservatives willing to campaign for their votes. Why didn't President (George W.) Bush go to the NAACP convention for eight consecutive years and say, 'We need your help in liberating people'? I went around the country with Al Sharpton, who actually says the right things, and the reaction on the right is, 'how can you be associated with Al Sharpton'?"

Gingrich recalled an African-American man who "walked up to him after church and said, 'I notice you and the Rev. Sharpton care about children.' He didn't notice me, We have to decide whether we are prepared to go into every neighborhood in America, every precinct, knock on every door and say, 'there is a better future than a bureaucratic-welfare state-socialist model that is secular and will destroy our country and destroy our children's future.' "

What about charges that Republicans and conservatives are engaging in overheated rhetoric that could lead to violence against public figures?

"For people who are angry, the correct response is to beat them. Take all your energy, reach out and attract everybody you can, win the argument and beat them. The greatest satisfaction should be the retirement of Pelosi, Reid and Obama. ... For the mugger to complain that people are objecting vociferously to being mugged ... is an act of chutzpah on a grand scale. For any of these people who have deliberately bullied, bribed and abused the system to impose their will against the country to now be shocked that the country is unhappy with the machine, I think, is a further act of arrogance. They would like to mug you routinely while you quiescently thank them for the privilege of being mugged."

Is anyone in the party listening to him? He grins: "You'll have to ask them."

Gingrich sounds like he wants to run for president. When will he decide?