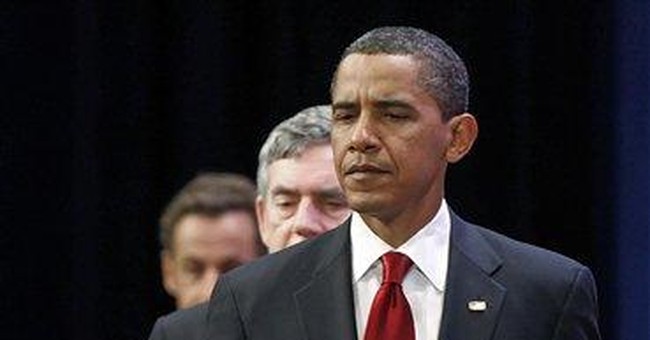 If you are an enemy of America seeking her destruction, you would add to your pursuit of nuclear, biological and chemical weapons the undermining of this nation from within. You would do this largely through deception, putting on a peaceful face while subtly plotting ways to bring America down.

That tactic was on display last Friday in Washington as a crowd estimated at 3,000 Muslims gathered to pray. The organizer of the rally, Imam Abdul Malik of Brooklyn, N.Y., told Americans what we like to hear: "What we've done today, you couldn't do in any Muslim country. If you prayed on the palace lawn there, they'd lock you up."

As reported by The Washington Times Sadara Shaw, a resident of Washington, D.C., was quoted as saying "It's a show of solidarity to show all Muslims are not terrorists but law-abiding citizens." That is probably true, but irrelevant since it takes only a small number of terrorists to cause havoc.

"We believe in America's possibilities," Malik told the crowd. "We didn't come to criticize our nation ... I want the American people to know that we love you."

The Imam's Facebook page tells a different story. But only The Times bothered to look at it. While Malik's Facebook shows him dressed in Western clothing, he attended the ceremony dressed as a sheik. That seems more appropriate to the real Imam Malik, because on his Web page he has written: "Democracy is not revelation, and democracy does not equal freedom, for in democracy you have apartheid, you have slavery, you have homosexuality, you have lesbianism, you have gambling, you have all of the vices that are against the spirit of truth; so no we don't want to democratize Islam, we want to Islamize democracy..."

Which Imam is telling the truth and which is practicing deception? One might debate whether apartheid (Jews and Christians), slavery (oppression of women) and homosexuality exist in Muslim countries, the claim of Iran's Ahmadinejad that homosexuals aren't present in his country notwithstanding.

President Obama says Iran has been building a second nuclear enrichment plant. Oh, but Iran will allow in U.N. and possibly even American inspectors. Secretary of State Hillary Clinton says she expects the Iranians will tell us exactly what they are up to at a gathering of six foreign ministers in Geneva on Oct. 1. But hasn't Ahmadinejad already said? All of that nuclear material is to heat, cool and light the homes of peace-loving Iranians. What else is there to discuss?

Iran has about as much credibility as North Korea and Venezuela. Iran reportedly will help Venezuela's Hugo Chavez mine uranium in his country. Chavez denies it, of course. And when he is forced to admit it, he will claim it is for peaceful purposes. Memo to President Obama: radical, fundamentalist Muslims believe they have a religious duty to lie and deceive "infidels." Chavez has more secular motivations for his untruths.

Has anyone noticed the apparent uptick in terrorist activity? In addition to the above, the Justice Department has brought charges in three "unrelated" bomb plots. In the most serious case, Najibullah Zazi, an airport shuttle driver from Denver, was indicted in New York on charges of conspiracy to use weapons of mass destruction against persons or property in the United States. Authorities last week also arrested a 19-year-old Jordanian citizen, Hosam Maher Husein Smadi, and accused him of trying to blow up a downtown Dallas skyscraper. And an Illinois man, Michael C. Finton (aka Talib Islam) was ordered held last week on charges he tried to blow up a federal building in the state's capital.

Are we being infiltrated and surrounded by people who want us dead and our country destroyed? Try a little experiment, Google "Islam near" and then type in the name of any city or town. When I tried the small town of Bryn Mawr, Pa., 10 Islamic-related sites came up. In larger cities, there are as many, or more. Deception is part of the terrorists' battle strategy. Who are you going to believe, the public Imam Malik of the prayer gathering, or the Imam Malik of the Facebook page?