Heard That (Middle East) Song Before 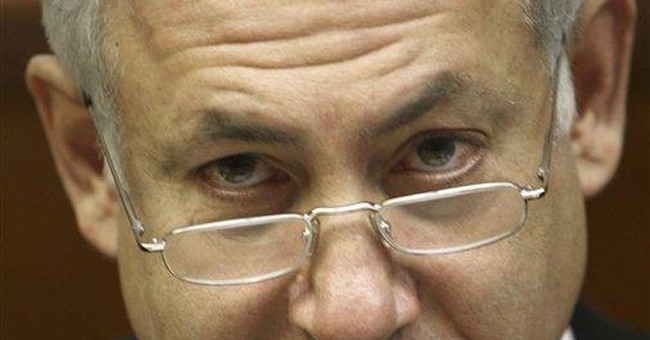 Prime Minister Benjamin Netanyahu visits Washington next week and if anyone wants an appropriate song to characterize the buildup to his meeting with President Obama it should be the old Sammy Cahn-Jule Styne number "I've Heard That Song Before," which goes, "It seems to me I've heard that song before; it's from an old familiar score; I know it well, that melody."

This time there is a twist. King Abdullah of Jordan, in an interview this week with the Times of London, raised the stakes by predicting war if the Palestinian side doesn't see real progress toward its own state.

Abdullah said a 57-state, not a two-state solution, is what's needed, which means all Arab and Muslim states, as part of any deal, would need to recognize Israel. Good luck with that.

Last week in London I spoke with Liam Fox, a conservative Member of Parliament and "shadow defense secretary." Fox told me, "There is a belief in some quarters that if only you can resolve the problems between Israel and Palestine, all the other problems in the Middle East, in a domino-like fashion, will fall into place. That is absolute nonsense."

Fox said on a recent visit to Iran that Iranian politicians told him they realize they lack an air force to fight back if they are attacked by Israel, so they would use Hezbollah and Hamas. "They are part of our defense policy against Israel," Fox quoted them as saying, "Hamas is not part of the Palestinian problem. Hamas is the foreign-policy wing of Iran in Israel."

Hezbollah has its own charter. It says in part: "Our primary assumption in our fight against Israel states that the Zionist entity is aggressive from its inception, and built on lands wrested from their owners, at the expense of the rights of the Muslim people. Therefore our struggle will end only when this entity is obliterated. We recognize no treaty with it, no cease-fire, and no peace agreements, whether separate or consolidated."

Anyone see any wiggle room there? Have the actions of these two radical Islamic organizations, and their many cousins, demonstrated that they don't mean what they say?

As I have previously -- and repeatedly -- noted, the pressure from the United States ought not to be on Israel, which has mostly lived up to every agreement -- from Oslo, to Madrid, to Wye River. U.S. pressure should be directed at those bent on Israel's destruction. Israel's enemies lost land through military action aimed at destroying Israel. They are winning it back through diplomacy, pressure and terrorist acts carried out by their proxies, Hamas and Hezbollah. Israel's enemies have used this newly acquired land to launch attacks.

Gaza is the latest example. Israel unilaterally ceded Gaza to the Palestinians, which has been used as a terrorist base for firing missiles at civilians inside Israel. Why would anyone think that additional concessions, including an autonomous Palestinian state, would deter Islamic extremists from fulfilling the mandates of their charters?

For people who regard any presence by Jews on "Muslim land" as a religious and personal affront and negotiations with "infidels" (that would be we American "crusaders" and the "Zionist entity") as against the will of their god, why should they be expected to compromise on a matter of doctrinal "truth"?

The Palestinians will deserve a state when they and their Arab-Muslim supporters prove by their actions and a reconsideration of their religious doctrines that they are prepared to allow Israel to exist in peace and have no intention of flooding a Palestinian state with "refugees" who might very well be used to finish the job so many of them wish Hitler had completed.

The question Netanyahu should ask President Obama is whether the United States wants to sustain the first democracy in the Middle East or whether it wishes to create another terrorist state?