The Jack Kemp I Knew 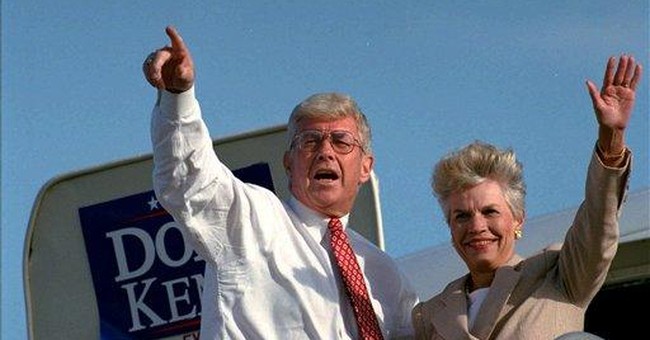 Many have commented on the life and legacy of Jack Kemp -- the former Buffalo, N.Y., congressman, former vice presidential candidate, former HUD secretary, former professional football star and a friend for life to all those who knew him.

I knew Jack and his family well. Our children grew up together. We belonged to the same church.

Next to Ronald Reagan, Jack Kemp was probably the most optimistic Republican I knew. He was also a conservative advocate for civil rights long before many other Republicans would address that issue. This was because, as he said, it was difficult to oppose people you had showered with as an athlete.

Kemp believed civil rights was a conservative issue. After all, don't conservatives value people before government and don't they want to liberate individuals from those things that limit their ability to succeed? Kemp saw racial discrimination as one of those limiting things and he tirelessly campaigned against it. He even supported voting rights for the District of Columbia, though it would ultimately mean more Democrats in Congress.

New York Times columnist Bob Herbert wrote that Kemp's attempt to get his Republican Party to accept blacks and other ethnic minorities was "futile," given the GOP's "Southern strategy" in the 1960s and since. Kemp advocated economic independence and strong families. Herbert suggested that Kemp's strategy should have been to embrace Democratic objectives -- i.e., bigger and ever-growing government -- to help blacks overcome discrimination and poverty. The Herbert and Democratic Party approach has deepened dependency on government handouts. The Kemp approach sought to make the poor self-sustaining and independent of government.

In 1988, I attended a reception hosted by Kemp during the Republican National Convention in New Orleans. There may have been more African Americans at that event than in the entire GOP at the time. Kemp's civil rights activism was not for the purpose of attracting black votes -- though he openly appealed to blacks that they would find a better home and a better future in the Republican Party. Rather, his civil rights activism flowed from his belief that when the Declaration of Independence says all are created equal, it actually means all .

Kemp was way ahead of Republicans and Southern Democrats on race. He would visit housing projects like the notorious Cabrini-Green in Chicago, a nest of poverty and gang activity that even Chicago police officers were afraid to enter. It is now in the process of being torn down and its residents relocated. Whatever replaces it should include a plaque with a tribute to Kemp.

Kemp was an idea man, not caring who got credit so long as people's lives were improved. He disliked those who demonized people on "the other side." He saw all Americans on the same side and this put him at odds with certain people in his party who made enemies out of those who held different beliefs in order to raise money and attract votes. Some had a divide-and-conquer approach. Kemp's approach was to unite for the benefit of all.

This attitude was most evident during his 1996 vice presidential debate with Al Gore. Kemp began his remarks by promising no personal attacks and pledging to conduct himself with civility. The approach angered some on the Right, who wanted blood, but Kemp was true to himself.

Kemp regarded the football teams he played against as opponents, not enemies. His politics displayed the same attitude, which is why his opponents admired him on and off the field. It is also why his funeral Friday will be held at Washington's massive National Cathedral (the service was moved from his church to accommodate the large crowd that's expected). The cross-section of attendees will be a testimony to the value of his approach to politics and to life.

Jack liked people and if there was anyone who didn't like him, he worked overtime to change their opinion.

As Republicans hold public forums on how best to rebuild their party, they could do a lot worse than consider the ideas and attitude of Jack Kemp. His approach to problem solving, not destroying opponents, ought to be the GOP's strategy for building a better future ... and a better America.