The President and the Governor 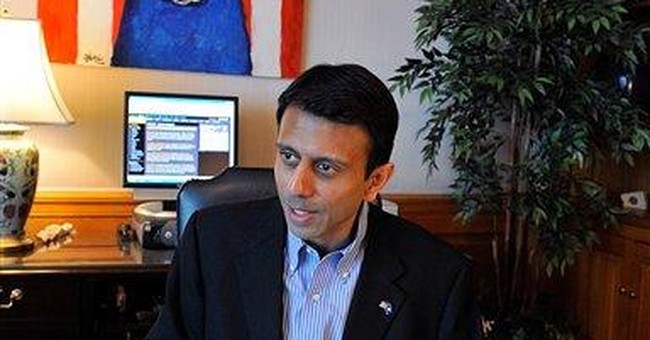 After weeks of "talking down" the economy and concern among some of his supporters that his sobering prognosis for the nation's recovery might be affecting America's natural optimism, President Obama delivered a speech to Congress on Tuesday, parts of which sounded as if they could have been written by a Republican.

"We will rebuild, we will recover, and the United States of America will emerge stronger than before," said the president to applause from members of both parties.

There were a number of contrasts, even contradictions, in Obama's address. The president claims he will halve the deficit, while substantially adding to it. He will improve schools, but opposes the voucher program. He will begin pulling most U.S. combat troops out of Iraq, but send 17,000 more to Afghanistan. He will "eliminate wasteful and ineffective programs," most of which were initiated by Congress and have constituencies who will be angry when these programs are cut.

In perhaps the biggest contrast of all -- bordering on subterfuge -- the president claimed the budget he presents to Congress this week is "free of earmarks." Well, if earmarks are absent from the budget, they are abundant in the $410 billion omnibus package that will be voted on separately, a bill that contains an estimated 9,000 earmarks. These include, as noted by Louisiana Republican Governor Bobby Jindal, who gave the GOP response to Obama's address, "$300 million to buy new cars for the government, $8 billion for high-speed rail projects, such as a 'magnetic levitation' line from Las Vegas to Disneyland, and $140 million for something called volcano monitoring." And according to Tom Jones, a staffer of Sen. Jim DeMint's who is going over the bill line by line and posting his pork findings on Twitter, $400,000 has been set aside to "combat bullying" and another $200,000 for tattoo removal, as part of a campaign to prevent violence.

There were many good lines in Jindal's speech, but he suffered the usual disadvantage of the opposition. He had no audience popping up like targets in a lively game of Whac-A-Mole to applaud him, and his delivery lacked the passion and personality that are Obama's supreme gifts.

Republicans have a lot to overcome, given their failure to live up to their self-professed standards. Obama has come to the presidency when the public is fearful about losing jobs, retirement savings and health insurance. It wants a nanny and Obama looks an awful lot like Mary Poppins.

The common theme of both speeches was that Americans can pull themselves out of this rut better than government, though government can help. Obama knows the country is tired of the partisan bickering that helps no one and that is why in saluting our common patriotism, he said, "I ... know that every American who is sitting here tonight loves this country and wants it to succeed. That must be the starting point for every debate we have in the coming months, and where we return after those debates are done. This is the foundation on which the American people expect us to build common ground."

Jindal seemed to reciprocate this sentiment when he said, "Here in my state of Louisiana, we don't care what party you belong to, if you have good ideas to make life better for our people. We need more of that attitude from both Democrats and Republicans in our nation's capital."

It is a noble sentiment, but old ways die hard as demonstrated by the silly popping up and down by members of Congress during Obama's speech and the knowing winks and one-upmanship practiced by the applauding factions. These people looked like children trying to emulate the bumper sticker, "My Kid Can Beat Up Your Honor Student."

Don't look for many Democrats to become converts to fiscal restraint now that they have the power to do whatever they want. The question is whether Republicans can demonstrate the superiority of their ideas at a time when the public memory of the party failing to live up to its principles is still fresh.

As Gov. Jindal noted, "You elected Republicans to champion limited government, fiscal discipline, and personal responsibility. Instead, Republicans went along with earmarks and big government spending in Washington."

Repentance can lead to quick forgiveness in Jindal's Catholic Church, but in politics absolution does not come as easily. The key for Obama is whether he can appear to be more of a Republican in some areas than Republicans, who have behaved like Democrats. So far, Obama has the upper hand, but the economic crisis, what happens when troops begin withdrawing from Iraq and where the terrorist suspects go and what they do after Guantanamo closes will determine his political future. If any of these go badly, his speaking skills will not save him. On these issues, at least, we stand or fall together.

Sen. Josh Hawley Wants to Know Why Pro-Lifers Are Held to an Unequal Standard by Biden's DOJ
Townhall
Tucker Carlson speaks at funeral for founder of the Hell's Angels and breaks Leftist brains
Twitchy
Woman's Disturbing Reaction to Man Calling Her out for Wrongdoing Shows an Infantilization of Society
Redstate
Now the Commies Want to Abolish Your Kitchen
PJ Media