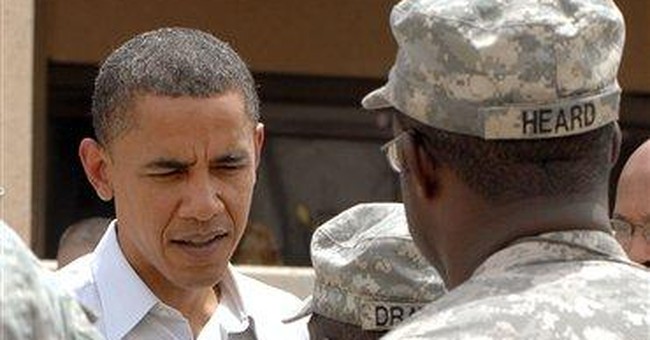 As an inveterate "stage-door Johnny," I have hundreds of song lyrics floating around in my head and can produce them at a moment's notice. Sometimes they jump out at the most appropriate time to describe a current event.

In the case of the Iraq War, Sen. Barack Obama has said that even though the military surge ordered by President Bush and backed by Sen. John McCain has worked, he still opposes it. Would he have preferred all-out defeat or an endless quagmire, which was where things appeared to be heading before the surge?

During the primary campaign, Obama said, if he were elected president, he would pull most - if not all - U.S. troops out immediately. He later added that before ordering a retreat, he would first consult commanders on the ground. Then he said he might have to "adjust" his timetable, which he said was 16 months. When the left went berserk over what it regarded as a broken promise to unilaterally withdraw, Obama said he was sticking to his 16-month timetable and had not changed his position.

Now to the song lyric, which characterizes Obama's decision-making process:

"You say yes, then it's no;
You say you'll stay, then you go
You're undecided now, so what are you gonna do?

Yes, it's about a fickle lover, but doesn't it apply to Obama and his "leadership" by focus group and political expediency?

Democrats have been critical of President Bush for what they regard as his stubborn refusal to admit mistakes in the war. They are less interested in confession than they are in using such statements to advance their own political agenda. They seem less concerned with promoting ultimate U.S. interests, which would, for now, be a stable and democratic Iraq. They say they want to win only the war in Afghanistan but have less to say about how to prevail in the much longer war against the radical Islamic extremists of which Iraq and Afghanistan are only a part.

Instead of leadership, Obama gives us politics and this:

Now you want to play, and then it's no,
And when you say you'll stay, that's when you go
You're undecided now, so what are you gonna do?

I've been sittin' on a fence, and it doesn't make much sense,
Cause you keep me in suspense, and you know it.

And suppose that after the pullout things deteriorate? The song covers that too:

You promise to return; when you don't I really burn,
Well, I guess I'll never learn, and I show it!

There is another possibility that the surge may be masking. It is that the enemies of democracy and America are lying low, knowing that if the surge appears to be working, U.S. forces are likely to withdraw more quickly. Then, after substantial numbers have left, the terrorists, backed by Iran, might flood back in, or come out of hiding and strike again. This could require a return of American forces at even greater cost in lives and money.

In a July 2 interview with Military Times, Obama said: "If current trends continue and we're in a position where we continue to see reductions in violence and situations and stabilizations and continue to see improvements on the part of the Iraqi army and Iraqi police, then you know my hope would be that we could draw down in a deliberate fashion in consultation with the Iraqi government, at a pace that is determined in consultation with Gen. Petraeus and the other commanders on the ground and it strikes me that that's something we can begin relatively soon after inauguration. If, on the other hand, you've got a deteriorating situation for some reason then that's going to have to be taken into account."

After all that, he still says before visiting Iraq that 16 months remains his timetable.

A drawdown of troops is now becoming a possibility, thanks to the surge and President Bush's refusal to buckle under political and media pressure. But that's no credit to Obama. He's undecided.

Team DeSantis Scores a Victory Against Jen Psaki
Katie Pavlich
American Medical Association Under Fire After Calling for Removal of Sex from Public Birth Certificates
Madeline Leesman
Will Biden Stick to What He Previously Said About Sexual Assault Allegations Against Cuomo?