After George Floyd, What One Year Has Brought

Byron York
|
Posted: May 26, 2021 12:01 AM
Share   Tweet
The opinions expressed by columnists are their own and do not necessarily represent the views of Townhall.com. 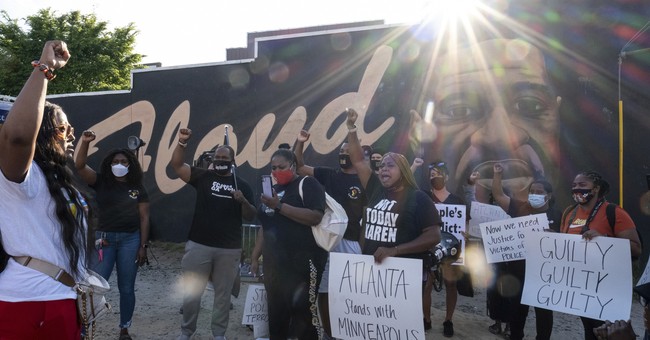 President Joe Biden and Vice President Kamala Harris met in the Oval Office Tuesday with the family of George Floyd, the man who died one year ago in the custody of Minneapolis police. The occasion is an opportunity to look at the enormous upheaval the reaction to Floyd's death has caused in the last year.

First, wall-to-wall media coverage of Floyd's death gave Americans a distorted picture of the extent of police violence. Unlike Floyd, most people who die in interactions with police are killed by gunfire. And fatal police shootings of unarmed civilians, black or white, are exceedingly rare. As the Manhattan Institute's Heather Mac Donald has pointed out, 14 unarmed black people and 25 unarmed white people were killed by police in 2019. That number, 14, represented two-tenths of one percent of black homicide victims in that year. It was also down significantly from previous years. And the toll of all those killed, of course, included a significant number of white victims as well as black.

Nevertheless, a national uproar over Floyd's death turbocharged the Black Lives Matter movement and the Defund the Police movement. Support for BLM skyrocketed after Floyd's death, and several city governments, including Minneapolis, took steps to defund their police departments. They did so even in the face of warnings that fewer officers and less active policing would inevitably lead to more crime.

And now those cities are suffering through a wave of increased violence. New York, Chicago, Los Angeles, St. Louis, Atlanta -- all have experienced huge increases in crime. The situation in Minneapolis is particularly dire. "Minneapolis homicides between Jan. 1 and last week were up 108% compared with the same period in 2020," writes Mac Donald. "Shootings were up 153%, and carjackings 222%. The crime increase began after Floyd's death and has never let up."

As anyone could have predicted, the reaction is here. "The surge [in crime] is prompting cities whose leaders embraced the values of the movement last year to reassess how far they are willing to go to reimagine public safety and divert money away from the police and toward social services," The New York Times reported recently. Instead of defunding the police, some cities are now talking about increasing funding for law enforcement. That's what a crime wave will do.

In addition, some on the left are worried that rising crime will hurt Democrats who were sympathetic to the movement. It might also give energy to law-and-order candidates who run for office on the basis of actually enforcing the law rather than diverting police money to other purposes like housing and health care. "Fear of violence undermines liberal politics," the leftist Times columnist Ezra Klein tweeted last week. "Strongmen politicians win, punitive responses like mass incarceration and warrior policing rise."

So Biden and Harris welcomed the Floyd family to the White House amid an uncertain atmosphere. There was a political purpose to the event; the president wants to build support for the George Floyd Justice in Policing Act on Capitol Hill. Biden had wanted the bill passed by now, but it is still hung up in Congress.

Finally, there is the image of George Floyd himself. As the name of the bill suggests, and as the White House visit suggests, a year of activism, protest and upheaval has lent a certain martyr's status to the Floyd name. "The martyrdom of George Floyd gave the American experience a moment of national anguish as we grieve for the black Americans killed by police brutality," House Speaker Nancy Pelosi said at a news conference on June 8, 2020. Later that day, on MSNBC, Pelosi said, "Isn't it a beautiful sight to behold? The martyrdom -- the martyrdom of George Floyd has evoked such a response of peaceful demonstrators calling for the change that they know our country needs as we go forward." Also on June 8, Pelosi, Senate Majority Leader Charles Schumer and other top Democrats held an event at which they knelt for 8 minutes and 46 seconds in Floyd's memory.

But it is important to remember that the issue here is how police treat people who are criminals or who are suspected of committing crimes. Suspects in custody have the right to be treated decently and in accordance with the law, which is why former Minneapolis police officer Derek Chauvin was convicted of second- and third-degree murder and manslaughter in the Floyd case. But no one would want to emulate George Floyd. He had a record of nine arrests, almost all of them for drugs and theft, and served stints in jail before being sentenced to five years in prison for aggravated robbery with a deadly weapon. On the day of his death, he was high on fentanyl, hanging out with a known drug dealer and allegedly engaged in petty crime at a convenience store. Then he resisted arrest.

What is important in the Floyd matter is to focus on the issue of police handling of cases like Floyd's -- on the lawful treatment of suspects -- and not on George Floyd himself. It is not about creating a martyr. It is not about defunding the police. Dwelling on that has contributed to what is now an ongoing disaster of increased crime in the United States.

This content originally appeared on the Washington Examiner at washingtonexaminer.com/opinion/byron-yorks-daily-memo-what-one-year-has-brought.