Byron York
|
Posted: Dec 05, 2018 12:07 AM
Share   Tweet
The opinions expressed by columnists are their own and do not necessarily represent the views of Townhall.com. 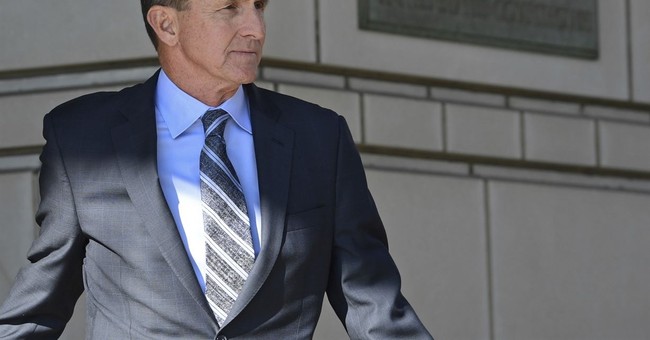 Michael Flynn has been waiting for more than a year to be sentenced. The retired three-star Army general, who spent 24 days as the Trump White House national security adviser, pleaded guilty on Dec. 1, 2017, to lying to the FBI in the Trump-Russia investigation. He agreed to cooperate with special counsel Robert Mueller.

Flynn's sentencing, which has been delayed a number of times for reasons that have never been disclosed, is scheduled to finally take place on Dec. 18. Late Tuesday, Mueller filed what is called a sentencing report. Citing Flynn's "substantial assistance" to the investigation, Mueller recommended "a sentence at the low end of the guideline range -- including a sentence that does not impose a period of incarceration."

It's no surprise Flynn might be spared jail time. So far, two figures in the Trump-Russia matter have been sentenced for lying to investigators, the same offense as Flynn. Alex van der Zwaan, a bit player connected to Paul Manafort, was sentenced to 30 days in jail. George Papadopoulos, a short-time Trump campaign foreign policy adviser, was sentenced to 14 days -- and that was after Mueller complained that Papadopoulos had not been cooperative when he was purportedly assisting the investigation.

Flynn, on the other hand, is a retired general with a long record of service to the United States, which Mueller took into consideration in recommending no jail time. "The defendant's record of military and public service distinguish him from every other person who has been charged as part of the (special counsel's) investigation," Mueller wrote.

What the sentencing recommendation did not address was the sketchy beginnings of the Flynn investigation. It started with the Obama administration's unhappiness that Flynn, during the transition as the incoming national security adviser, had phone conversations with Russia's then-ambassador to the U.S., Sergey Kislyak. Because Kislyak was under American surveillance, U.S. intelligence and law enforcement agencies had recordings and transcripts of the calls, in which Flynn and Kislyak discussed the sanctions Obama had just imposed on Russia in retaliation for its 2016 election interference.

There was nothing wrong with an incoming national security adviser talking to a foreign ambassador during a transition. There was nothing wrong with discussing the sanctions. But some officials in the Obama Justice Department decided that Flynn might have violated the Logan Act, a 218-year-old law under which no one has ever been prosecuted, that prohibits private citizens from acting on behalf of the United States in disputes with foreign governments.

The Obama officials also said they were concerned by reports that Flynn, in a conversation with Vice President Mike Pence, had denied discussing sanctions. This, the officials felt, might somehow expose Flynn to Russian blackmail.

So Obama appointees atop the Justice Department sent FBI agents to the White House to interview Flynn, who was ultimately charged with lying in that interview.

The FBI did not originally think Flynn lied. In March 2017, then-FBI director James Comey told the House Intelligence Committee that the two FBI agents who questioned Flynn "did not detect any deception" during the interview and "saw nothing that indicated to them that (Flynn) knew he lying to them," according to the committee's report on the investigation into the Trump-Russia affair. Comey said essentially the same thing to the Senate Judiciary Committee and, in the words of chairman Charles Grassley, "led us to believe ... that the Justice Department was unlikely to prosecute (Flynn) for false statements made in the interview."

FBI number two Andrew McCabe told the House the same thing. "The two people who interviewed (Flynn) didn't think he was lying, (which) was not (a) great beginning of a false statement case," McCabe told the Intelligence Committee.

Only later, after Comey was fired and Mueller began his investigation, was Flynn accused of lying. He ultimately pleaded guilty.

Mueller's sentencing recommendation specifically mentions the suspicion that Flynn violated the Logan Act. It says nothing about the Obama Justice Department's blackmail tale.

Hill Republicans have been suspicious about the Flynn case for quite a while. But they have not been able to get their hands on some key documents and testimony that might tell them what happened.

House investigators have a chance to learn more this week when, on Friday, Comey appears for a behind-closed-doors interview with members of the Judiciary and Oversight committees.

Lawmakers have promised to release the transcript of the interview within a day or two of its completion. That might possibly give the public a more complete picture of the Flynn case. Investigators could ask Comey specifically how the agents who interviewed Flynn characterized his answers and behavior. They could ask whether Comey believed Flynn would be indicted. They could ask what evidence Comey saw to suggest that Flynn did, in fact, lie. And they could ask if Comey ever saw the reports, the so-called 302s, that the agents wrote describing the interview.

Congress has long ago pressed the Justice Department to hand over the 302s and other documents. So far, the answer has been no. But soon the Flynn case will be entirely over. Perhaps then the public will finally learn what really went on in United States of America v. Michael T. Flynn.