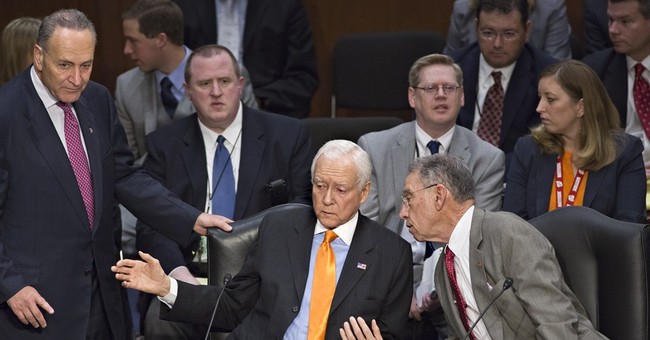 Are snowboard instructors key to American immigration policy? Well, they're important enough to be specifically included in the Senate bipartisan Gang of Eight immigration reform bill.

How did that happen? The original 844-page Gang of Eight bill, released in mid-April, granted a break to certain foreigners who come to the United States to work but do not wish to settle here. The Gang -- which includes Democratic Sen. Michael Bennet from the nation's skiing capital of Colorado -- gave one of those breaks to anyone who is "a ski instructor seeking to enter the United States temporarily to perform instructing services."

That was in mid-April. A couple of weeks later, the Gang released an 867-page substitute bill filled with changes large and small. Among those changes was new language adding snowboarders to the ski-instructor clause.

In the revised bill, the break goes to anyone who is "a ski instructor, who has been certified as a level I, II, or III ski and snowboard instructor by the Professional Ski Instructors of America or the American Association of Snowboard Instructors, or received an equivalent certification in the alien's country of origin, and is seeking to enter the United States temporarily to perform instructing services."

So now the American Association of Snowboard Instructors has been recognized in historic legislation that could bring profound changes to the United States.

The bill has been public for less than a month, and the substitute version for an even shorter period of time. Only now are analysts beginning to go through all of its details, and only now are those details surfacing in the public conversation.

For example, in another overlooked portion of the bill, as conservative writer Yuval Levin points out, the Gang of Eight "defin[es] the hourly wages of immigrant farm workers to the second decimal place."

It's true. Among other things, the bill sets pay scales for "Animal Breeders; Graders and Sorters; Farmworkers and Laborers, Crop, Nursery, and Greenhouse; and Farmworkers, Farm, Ranch and Aquacultural Animals." The Gang dictates, for example, that graders and sorters will be paid $9.84 an hour in 2016, equipment operators $11.58 in 2015, and nursery and greenhouse workers $9.64 in 2016.

Despite the bill's far-reaching scope and extraordinary level of detail, Democrats are trying to move it through the Senate with unusual speed. This week marks a new stage of that effort. On May 9, the Senate Judiciary Committee began considering amendments to the bill -- work that chairman Sen. Patrick Leahy, D-Vt., has promised will be finished, with a final committee vote, by the end of this month. After a few initial sessions, Leahy said recently, the committee will meet "every day and evening" to make the deadline.

Democrats are hurrying because they can. They outnumber Republicans 10 to eight on the Judiciary Committee, which means Democrats can by themselves shoot down any unwanted amendments. In addition, two of the committee's eight Republicans, Lindsey Graham and Jeff Flake, are members of the Gang of Eight, giving pro-reform forces even more strength, should they need it.

Sure enough, in the first session devoted to considering amendments, Graham and Flake joined with a unanimous Democratic majority to defeat several Republican-sponsored border security proposals.

When it's finished, the bill, with whatever amendments Democrats on the Judiciary Committee approve, will go to the full Senate, where Majority Leader Harry Reid, D-Nev., has vowed to keep the rush on. Again, Democrats enjoy another big numerical advantage, with 55 members. Add to that the four Republicans on the Gang of Eight, and you've got 59 in a body in which 60 votes are required to overcome a filibuster. Getting that 60th vote from Republicans still panicked by last November's election results will likely be no problem for the pro-immigration forces.

Unless things change. One key indicator of immigration reform's prospects in the full Senate will be positions taken by Democratic senators -- Mark Pryor, Mary Landrieu and Jon Tester -- who voted against reform in 2007. Back then, they were voting against a Republican president, George W. Bush, who favored reform. Now, they would be crossing a president of their own party.

In addition, there are other Democrats up for re-election next year in states won by Mitt Romney in 2012. Together, what they decide to do could shape the final bill.

But the bottom line is that in the Senate, Democrats have an advantage that will be hard to beat. That makes what happens in the Republican-controlled House, which still has not come up with a plan, crucial to the future of immigration in America.