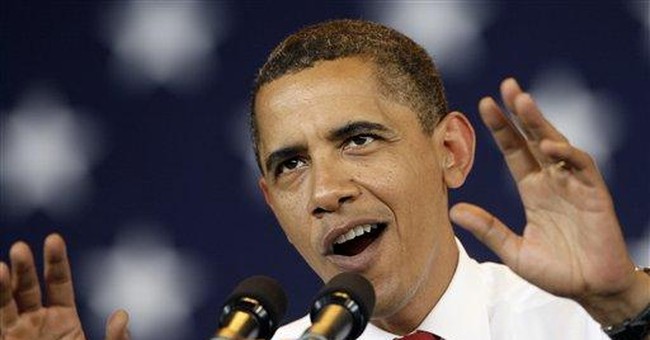 Nobody has to tell me things are going from bad to worse in America. The question that preys on my mind is when it was that we began our descent. Some would say it started when Jimmy Carter turned his back on the Shah of Iran, thus providing an impetus for latter-day Islamic terrorism. Others might say it was the first time Bill Clinton dropped his pants in the Oval Office, while still others might contend it began when the Supreme Court determined that the Pursuit of Happiness was a rationale for 80 million abortions on demand.

For all I know, things might have begun sliding the very first time some slack-jawed teenager struck a pose and struck a chord on an imaginary guitar. There was a time, after all, when most American kids were actually given music lessons and learned how to play an actual instrument, and even saved up their allowance to buy sheet music.

Whenever the slide began, in the months since Obama was crowned, we’ve slid faster and further than I would have dreamed possible. Obama keeps huffing and puffing and the federal government just keeps expanding like a gigantic balloon. It’s only a matter of time until it blows up in all our faces.

Not in my wildest nightmares would I have imagined that an American president would travel to countries we’ve bled and died to defend, and apologize for our arrogance. Neither would I have ever expected that the same man who casually dismissed our special relationship with England would curtsy to a Saudi prince; refer to a blood-thirsty Muslim cleric, the Ayatollah Ali Khamenei, as the Supreme Leader; and butter up a Russian tyrant who cut his eye teeth working for the barbaric KGB.

After all that, I wasn’t the least bit surprised when Obama joined Hugo Chavez and the Castro brothers in demanding that Honduras allow dictator wannabe Manuel Zelaya back in the country to resume his assault on democracy.

Obama’s groupies in and out of the media used to cry “Foul!” during the campaign whenever people would question the character of a man whose intimate circle included a corrupt Chicago lobbyist, an unrepentant terrorist, a racist minister and a spouse who announced that America was a mean country. It seems that in the past several months, his circle has grown in size, but unfortunately not in character.

The president’s good friend, Al Gore, who stands to clean up, thanks to the Cap and Trade bill, has long campaigned for the greening of America. How long will it take people to wake up to the fact that his major concern is the greening of Al Gore? For good measure, the greedy oaf recently compared the battle over global warming to the war against the Nazis. And, to think, some folks thought PETA was over the top when they compared a chicken farm to Auschwitz.

Speaking of Nazis and Auschwitz reminds me that I wish Israel, a haven for many of those who survived the concentration camps, would stop referring to portions of their country as settlements. Israel was attacked by its Arab enemies, fought back and won. Part of what the Israelis won was turf. It’s how just about every country on earth wound up having its present dimensions. Referring to the land as settlements makes it sound like they’re only borrowing it until the rightful owners come by and pick it up. You might as well call California, Texas and Arizona settlements. Well, come to think of it, I guess La Raza does.

As hard as it is to accept, there’s no getting around the fact that Al Franken is a U.S. senator. On the upside, just as people used to say that any boy could grow up to be president, now people can say that any comedian who’s smug, obnoxious and not the least bit funny, can grow up to be a senator. That being the case, I guess it’s not too much of a stretch to imagine that Sen. Franken might one day be joined by the likes of Bill Maher and David Letterman.

It is appropriate, though, that Franken represents Minnesota. Its state bird, after all, is the loon.

Before signing off, I found myself wondering the other day why it is, now that Afghanistan is Obama’s war, I don’t hear the Democrats or their lap dogs in the media referring to it as a quagmire, pointing out that the Taliban didn’t attack us on 9/11, and demanding that President Obama announce his exit strategy?