Liberals: The Enemy Within 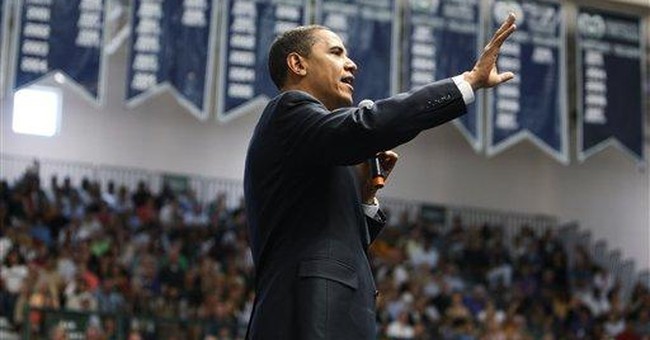 Feeling as I do about Barack Obama, it’s only natural that I would look for people to blame for putting him in the Oval Office. I mean, aside from the 63 million oafs who actually voted for the guy. The first villains who come to mind are members of the media who are still, in the words of Bernard Goldberg, slobbering over him. But I have come up with another group of troublemakers. They’re the folks who came up with the cockamamie primary system.

When you realize how much emphasis is placed on early results, both in terms of momentum and fund-raising, you can readily see how goofy it is that a tiny New England state and a handful of Midwesterners wield so much influence. I have nothing against the voters of New Hampshire or the folks who vote in the Iowa caucus, but it’s absurd that they should have so much power. The solution is quite simple. On the very same day, the Republicans and the Democrats would hold their primaries in all 50 states. The two winners would then square off in November. Not only would my plan streamline the entire process, but there would be far fewer interruptions of regularly scheduled TV programs. So, what’s not to like?

Frankly, I don’t think my system would result in better candidates. On the other hand, after 2008, it’s hard to imagine either party doing much worse.

Issues aside, one of the things I like better about Republicans than Democrats is that we aren’t so partisan that we automatically give our guys a free pass. When McCain joined with Ted Kennedy to pass their amnesty bill, he got worked over pretty good by conservatives. When Bush ran up the national debt, he got clobbered by Republicans and Democrats, alike. But when, in just three short months, Obama tripled the deficit, nary a discouraging word did we hear from a single liberal. Massive inflation looms over all of us, but Democrats just keep smiling and giving each other high-fives while Obama cranks out funny money like a counterfeiter on speed.

Of all the terrible things Democrats are responsible for, perhaps the worst is the way they foster and promote class and race wars in America for their own political advantage. They tell black people that nothing is ever their fault -- not early pregnancies, not an embarrassing school dropout rate, not an overemphasis on athletics, not selling or using drugs -- that everything, instead, is the fault of white Republicans. To poor people, they say they’d be rich if only white Republicans didn’t steal all their money, just as they say to the 41% of Americans who pay no income taxes, “here’s a rebate.”

And who is feeding them all this tripe? Why none other than Charles Schumer, Keith Olbermann, John Kerry, David Letterman, Dianne Feinstein, Bill Maher, Norman Lear, the Clintons, Michael Moore, Harry Reid, Jon Stewart, Patrick Leahy, Arianna Huffington, Barbara Boxer and George Soros, all of whom are white millionaires. Clearly, P.T. Barnum was right about the birthrate of suckers and the Baltimore sage, H.L. Mencken, wasn’t being overly cynical when he observed that nobody ever went broke underestimating the intelligence of the American public.

When I heard the other day that a California senate committee had passed a resolution making May 22nd “Harvey Milk Day,” my head began spinning. Naturally, a homosexual advocacy group announced that “the bill would explain how important Harvey is to all Californians.” I’m afraid if the silly movie, “Milk,” didn’t do the trick, a mere senate bill isn’t likely to pull it off. On the other hand, this is California, after all, a place where Abe Lincoln, Thomas Jefferson, George Washington and even Jonas Salk, don’t have their own days, but a union leader named Cesar Chavez does!

The frustration of trying to be logical in an illogical world is nothing new. In the 19th century, a clergyman named Charles Colton observed: “The soundest argument will produce no more conviction in an empty head than the most superficial declamation; as a feather and a guinea fall with equal velocity in a vacuum.”

We have our liberals to contend with and, obviously, Rev. Colton had his. Which reminds me, when my son first began crawling, for some reason the only gear he could manage was reverse. I don’t know how commonplace a phenomenon that is, but I found it very amusing. He would get up a good head of steam but, no matter how hard he’d try to reach his destination, backwards he would scramble. It was many years ago and I rarely dwell on it, but the other day, when I was thinking about Obama, Geithner and all the other folks in Washington who are in over their pointy heads, it occurred to me that left-wingers remind me a lot of little Max. They’re always full of big plans, they’re always going off in the wrong direction and, more often than not, their diapers need changing.