Do Either God or Al Gore Exist? 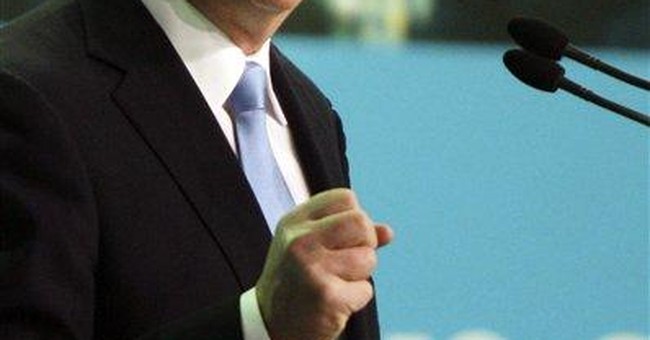 Human beings like to believe they’re totally rational creatures. To take an extreme example, atheists are convinced they can prove that God doesn’t exist. This is a particularly fascinating phenomenon because among those who believed in God’s existence are such brainy people as Albert Einstein, Rene Descartes, Albert Schweitzer, Ralph Waldo Emerson, Johann Sebastian Bach, Thomas Jefferson, George Washington, Thomas Aquinas, John Milton, Michelangelo, Herman Melville and even the deeply cynical Graham Greene. While representing the opposing point of view, we have the likes of Madalyn Murray O’Hair and Bill Maher. And yet, any number of atheists who have to take off their shoes in order to count up to 11 are absolutely convinced they’re right.

In our own time, a great many people who are deeply skeptical when it comes to God are zealots when it comes to man-made global warming (aka climate change). Al Gore, who isn’t any more intelligent than Joe Biden and got worse grades in college than George W. Bush , is the high priest of what we might call the weather religion.

Now, in the distant past, mankind believed all sorts of things we now discount. For instance, people used to believe the earth was flat. They were also convinced that the sun revolved around the earth. While both beliefs have been proven wrong along the way, I’d say those people had far better reasons for believing hogwash than we do today.

I mean, it makes sense to believe the earth is flat. People are accustomed to flat surfaces. I can see a natural reluctance to accept the notion that the earth is round. After all, you can balance yourself on top of a large ball, but not on the bottom. So, if I lived hundreds of years ago, I would wonder why if the earth was round, people in places like Australia and Brazil and southern Africa didn’t fall off.

In the same way, it’s far more reasonable to believe the sun is revolving around the earth than to accept the notion that it’s vice versa. If the earth is spinning around and flying through space, how is it we don’t feel it moving? If we ride on a horse and we go only, say, ten miles an hour, we feel the wind in our face. But the earth is traveling thousands of miles an hour and we don’t even feel a slight breeze? Horsepockey! I would have said to Galileo Galilei. Balderdash! I would have said to Nicholas Copernicus.

But Al Gore is no Copernicus and he’s certainly no Galileo, and, furthermore, he’s making money hand over fist, not to mention copping Oscars and Nobel Prizes, peddling his malarkey to the besotted.

The fact that through all of recorded history, the earth has gotten warmer and cooler long before the internal combustion engine was even a gleam in Nicholas Cugnot’s eye, should suggest to everyone that Gore is peddling month-old fish. But so long as there are enough true believers to make it profitable, not to mention chic, the weather zealots will continue to trample truth and logic underfoot.

All hope is not lost, however. Quite recently, Sammy Wilson, who represents East Antrim in Parliament, and also serves as England’s environmental minister, dismissed man-made global warming as a gigantic con game. But, of course, I’m sure that Gore’s galoots will discount his judgment. After all, he’s merely a politician, whereas Al Gore is a…..god?