Bryan Crabtree
|
Posted: Apr 15, 2016 12:01 AM
Share   Tweet
The opinions expressed by columnists are their own and do not necessarily represent the views of Townhall.com. 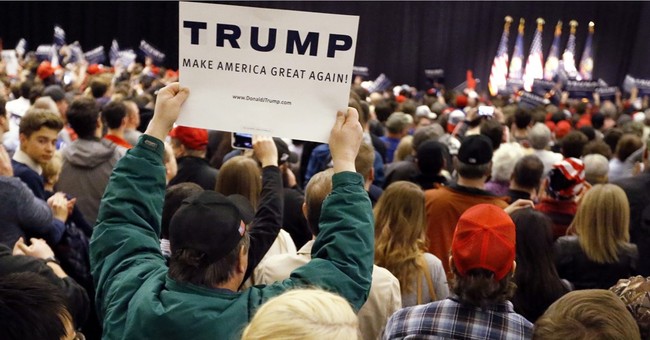 The headline of this article represents thousands of tweets I received over the last few months. These are people who despise Donald Trump. This sort of rhetoric sounds more like a bunch of liberals. What's scary is that it's coming from well-known conservatives.  Romney faced a similar  set of labels by the 2012 Obama campaign.

We are all running our lives like they’re political campaigns.   For many people, the only way to deal with dissent or disagreement is to dismiss or attack the person or the entire group of people. Cumulatively there is little difference between Ted Cruz and Trump.  However, to listen to each side, they seem so far apart.

There are many in this country that feel Pres. Obama has fundamentally harmed the economic foundation of our country.   Most importantly they feel he has abused our Constitution and damaged our freedoms and rights.   If you believe that is the fundamental problem facing this nation, then Ted Cruz is the best option for the Republican nominee.

But there are far more problems than Pres. Obama and the effect of his policies.

There is another belief by nearly a majority of conservatives.   Many believe in what Donald Trump represents.   He represents an American success story; an idea that seems to be slipping away.   He speaks candidly and ultimately believes that America should be far greater than it is.   Contrary to opposing opinions, this is a very proactive and positive message that speaks about opportunity, candor,  hard work, discipline and prosperity.  What Donald Trump represents is the ability to be proud of success, wealth and logic and not be forced to hide it or feel guilty as a result of it.

Both Trump or Cruz would be very tough fighting this political-correctness and leftist job-killing policy.  Both would use common sense and sound judgment in their policy making.  But, each side has convinced itself otherwise.

Ted Cruz is a constitutionalist and would likely be the best candidate to address the damage Obama has caused (to our freedoms).   But, Cruz is boring.   When he's not bashing Donald Trump, he's elegantly discussing conservative policy.  Many Cruz supporters are forgetting that a lot of American people are more interested in drama and don’t have the mental capacity to understand policy and information.   Because of this, Cruz may not be dynamic enough to defeat Hillary Clinton.  If he's the nominee, please prove me wrong.

As the Republican Party has become distracted by the #nevertrump drama, we've lost sight of what wins elections. Conservatives have struggled with this for many years. We have to be ‘for something’ instead of ‘against everything.’

With millions of black and hispanic citizens on welfare, food stamps and in poverty (proportionately higher than other races), we should be articulating proactive-policies that help them rise out of these social-jails. Conservatives should be discussing solutions on education-reform, curing poverty and criminal justice reform including decriminalization of marijuana.

While conservative voters continue to abuse and verbally assault each other, the Clinton machine is addressing each of these issues.  And their quick-fix policy is very dangerous.  Nonetheless, uneducated citizens believe Clinton-policies will provide them immediate economic and social pain-relief (free college, more entitlements, higher taxes on the rich, etc).  , These voters are not sophisticated enough to understand it may create an immediate relief with a heightened amount of long-term pain.  As the general election advances with the eventual Republican and Democrat nominee, conservatives will be playing catch-up trying to convince the citizens that Clinton-policy will not solve our problems.  Conservatives will be correct, but not believed.

Today - not later - we should be proposing solutions.  Here’s an example of something that bothers me tremendously.  The welfare and food-stamp office doesn't put job and career opportunities on their information/announcement boards.  They post benefits-advertisements that ultimately locks these dependent-citizens into even more of an economic jail.  It is absurd to me that our government pushes more social benefits instead of investing into career and skills development.  Have you ever walked into the entitlement offices?  You would think they make a profit from locking more people into these programs.  I suppose they do.  The profit is liberal votes.

One of the most transformative initiatives we could undertake is educational reform.  Generational poverty is a direct result of the experience many children face in the first three years of life. By the age of three the average underprivileged child has heard 30 million fewer words than other children. However, there is a massive push by liberals like Hillary Clinton to expand universal pre-K across our nation costing us billions of dollars. Where do they get that money?  It comes from job creators through higher taxes (which kills jobs).  There has been no consistent research showing universal pre-K has any effect.  In fact, if we start early development at the age of four it makes little difference, considering that learning deficiency/damage has already occurred by the age of three.

Might I suggest that Republicans consider proposals efficiently using the existing funding spread across all of the first four years of these children's lives?  Let’s help the children enhance their learning skills early in life by partnering (and teaching) their parents.  The Liberal-policy is simple:  Buy votes by providing government-funded daycare.  The kids are simply pawns used for manipulation.

In the time Donald Trump and Ted Cruz, along with their supporters, waste tearing each other apart, we could all invest just a little bit of that time into actually creating solutions to help people.  Both Cruz and Trump have solid ideas about helping people who struggle and increase opportunity for everyone.  But that message has been lost in all the hate.  No side is more guilty than the other.

The battle against each other is squandering the opportunity to block the job-killing, tax increasing, ineffective, divisive policies of the left.