Bryan Crabtree
|
Posted: Feb 25, 2016 12:01 AM
Share   Tweet
The opinions expressed by columnists are their own and do not necessarily represent the views of Townhall.com. 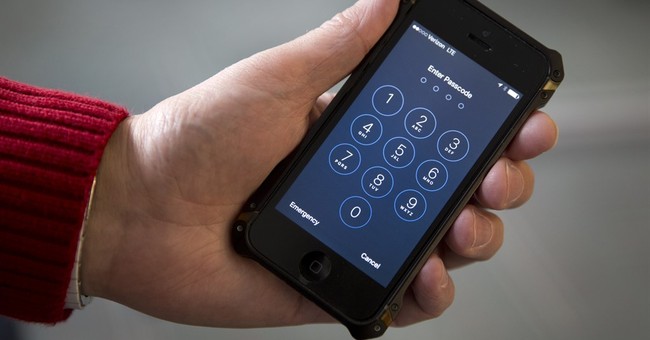 I’m shocked that so many Americans are ignorantly willing to empower this federal government to create a master key to our smartphones. The majority of Americans in a Pew Research poll said they agree with the government that Apple should unlock the iPhone of the San Bernardino terrorist-shooter (Syed Rizwan Farook).

My theory on this is that most people have no idea what the actual question is or what is involved in unlocking this phone. The Pew question is “Should Apple unlock the terrorist’s iPhone?” Here’s what the question should be: “Do you think Apple should be forced to create a software patch for the iPhone ios (that does not presently exist) in order to assist the government into hacking the terrorist-shooter’s iPhone?” I suspect the answer to that question would be an overwhelming “no.”

This is not as simple as ‘unlocking’ an iPhone. Apple created the encryption process specifically so user-data could not be accessed once the phone was locked - not even by Apple. Once your four-digit code is entered into the iPhone 5 or greater, the stored private data is encrypted by a random algorithm. While Apple created the algorithm, they did not create software (a master key) to decrypt the data. It’s a brilliant security feature and since no decryption exists, it makes your phone-data as safe as possible.

Therefore, what the government is asking Apple to do is create a software patch (that doesn’t exist) to unlock the iPhone without triggering it’s ‘erase all data” anti-hacking (theft) features. This is new software and anyone who states otherwise, is lying or misinformed. This is unprecedented via court-order. Further, it is a display of just how ignorant (perhaps arrogant) our country has become.

Apple does not possess Farook’s data such as a phone company would possess his calling and text records. The data is on a device that Apple sold. This would be akin to asking Samsung to create a software program to tell the government what television programs you’ve been watching. In that scenario, why not just ask Comcast, right? A similar parallel exists in the Apple case as well. I’ll come back to that.

We wade into topics with strong opinions, as a nation of people, for which we know little about and set forth action plans that are very dangerous for millions of people. The truth is that creating this ‘master key’ is likely more dangerous to 94 million iPhone users in the United States than the value of the data we may find on Farook’s iPhone. Once there is a ‘master key’ it can be leaked or hacked and fall into the wrong hands exposing millions of Americans to data and identity theft. If you don’t think it’s possible for such top-secret data to be released, might I remind you of Edward Snowden who revealed the government’s top-secret spying program on American citizens and foreign leaders?

But, wait, there’s more! On top of this ridiculous demand by our government to Apple, the phone in question was owned by San Bernardino County, California. Why would a government body ever give an employee a phone for which they do not have master-access? If that is not a possible feature with iPhone then they should be using a device that allows such control.

Further, this phone must have an iTunes or iCloud account. I’m curious as to what is available on this actual device that couldn’t be reconstructed on one or both of those Apple controlled accounts (where Apple does possess data on their actual servers). Through iTunes they could certainly determine what apps (email or communications programs) Farook was using. Then, the government could subpoena the records of each app developers’ servers to reconstruct the data. Those communications went through some server, in some location. There might be a tranche of data if an iCloud account exists of photos, locations, even people.

And, why can’t they gather the text, cell tower location and phone call records of Farook’s phone to determine with who, what and when he was interacting? Well, that wouldn’t give our government the master key to search nearly 100 million Americans’ phones without a warrant now would it?

So if the government wants to avoid being put into this situation again, they need to grow a brain and stop giving employees unfettered access and usage of government equipment without the proper security and control measures in place. And, personally, I feel just a little bit safer knowing that there is no way to access my phone’s data while it is locked. You should too!