Bruce Bialosky
|
Posted: Dec 17, 2017 12:01 AM
Share   Tweet
The opinions expressed by columnists are their own and do not necessarily represent the views of Townhall.com. 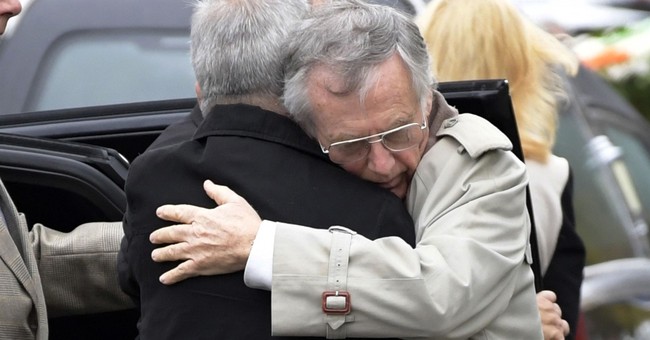 Author's note: This is a column I ran a few years back and I thought was particularly important during this Christmas season to revisit.

A friend was visiting who I only see on occasion.  After talking about our common interests, he told me he was currently splitting his time between where he lived and where he grew up. That was because his 90-year-old father needed to have a family member nearby.  After commending him for doing the right thing in taking care of his aging parent, I asked whether he had any siblings who could help.  He stated he had one who was no longer in communication with him or his father.  His answer as to why was because his father and the sibling had a fight five years ago. Shocked by the statement I inquired of him, “You mean to tell me your sibling got so upset with an 85-year-old man that they no longer communicate?”

Estranged relatives have destroyed me for a while now.  Along with parents divorcing, family members refusing to interact with their parents, brothers, sisters, aunts, uncles or cousins just drives me crazy.  We have enough problems with broken families and families that never fully formed.  We have shrinking families due to fewer children per family already.  What we do not need are family members deserting each other due to perceived grievances.

Family estrangement is the physical and/or emotional distancing between at least two family members in an arrangement which is usually considered unsatisfactory by at least one involved party.  We can all think of situations where separating from your family is justified.  For example, if your mother killed your father. But how frequently do things like that happen?  Most of the time when you hear someone’s story about why they no longer speak to a family member, you just shake your head with wonderment about how things disintegrated to the point of abandoning any communication.

Just about everyone experiences feelings of despair from dealing with some family members.There were many times when my mother was alive I wanted to strangle her.  There were times when I just could not speak with her for days.  But cutting her off was never an option.

My son and I fight like - a father and son.  He wants to assert his individuality and I want to help him from stepping into a pile of dung that he can easily avoid.  Though he solicits advice from both my wife and me often, sometimes matters degenerate into a battle.  Once when he was in college he cut off communication for a couple days (which with my son and I is an eternity.)

When we spoke I made clear to him that he could yell at me or call me foul names.  But one option he could never do was go silent. Since that time he has never pondered that path again.

It is often stated that the worst thing that could happen to a parent is for them to outlive a child.  Then the second worst thing is for the child to become estranged.  Whenever I hear these stories I focus on two things.  First, what could have possibly transpired that would cause a child or a parent to cut off communication from each other?Second, what pain the parent must be going through because in a way their child has died.

I personally have not experienced the challenges of a mother-daughter relationship, but I am well aware of the challenges of such especially during the teenage years. A relative once told me prior to my own daughter becoming a teenager that once a daughter reaches the age of 13, she goes to another planet and returns as a human being five or six years later.  Mothers and daughters can fight over a bevy of things that males don’t even begin to comprehend.  None of that justifies excommunication.

My wife often spoke of how her mother tortured her in her teenage years and even into her twenties.  She and her two sisters often started a call by saying “Guess what your mother did now.” But when her mother grew older my wife called her every day and spoke to her about many things.  She still complained at times of the ‘crazy’ things her mother said. But once her mother passed on she missed those daily talks and still does nearly two years later.

We all know of someone who is estranged from a family member.  You might be yourself.  Take this holiday season to end this needless destruction.  If you have not spoken to someone close to you, just pick up the phone and say “Hi.”  It will not be as painful as you might think.  If you have a close friend estranged from a family member, offer to drive them to rekindle the relationship.  If you really care for your friend, even jump on a plane with them and go break the fruitless stalemate.

You only have so many relatives.  You only have one mother or father.  Short of some grievous crime, the parting of the ways really is just a matter of false pride.  Make this the holiday season you end this sadness.  Listen to this advice and you will thank me for a long time.  More importantly, you will be a much happier person and so will I.

God Bless and have a wonderful Hanukah, Christmas and New Year.